When is the public realm a private pavement? 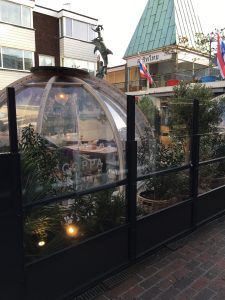 Getting stuck into … Brighton Square

The expansive café now occupying one full side and most of the open space of Brighton Square may well offer congenial facilities, in itself. The trouble is, it is nevertheless in Brighton Square.

This has transformed a much-appreciated pedestrian amenity into a commercial area exclusively accessible to customers. People passing through are channelled into a crowded quadrilateral path, denied most of the space by a formidable tall glass screen wall.

The sudden eruption of this intrusive institution, late last year, took almost everyone by surprise, not least its neighbours, and the impression of permanence is a further surprise, representing a bizarre and troubling circumstance. The city council’s development management enforcement service has responded to complaints from members of the public, 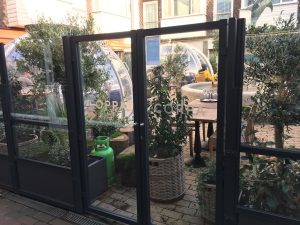 confirming that they have investigated the development. The outdoor seating is not classed as a structure in planning so does not require planning permission; highways licensing is the service for items on the public highway. The glass screening is not fronting a highway and is under two metres in height, so, again, does not require planning permission, being classed as permitted development.

Umbrellas were replaced by igloo pods which, the council has been informed, are a temporary seasonal measure, so no further action will be taken at the current time. However, if a degree of permanence is indicated by the pods remaining in situ in the spring, complaints will be investigated.

If deemed to be built structures, the pods would require planning approval; we question the judgement that assumes that they are not. They have curved timber supporting posts, and they effectively have walls and a roof. In any case, while these transparent pods add considerably to the obstruction of the visibility of the square, and particularly of the popular dolphin sculpture fountain by James Osborne, their removal would still leave all the inconvenience and clutter of the glazing enclosure and the private zoo-like seating and catering within it.

The private ownership of the land, enabling what was assumed by the public to be a public space to become in effect a private space, has been a startling discovery that sets us wondering – since the intrusion can occur in this location – where else something like this could happen. 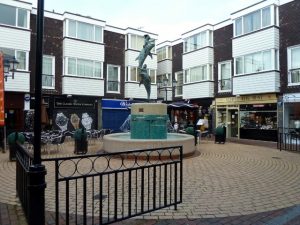 The square won a Civic Trust award for its design. In probably the most highly regarded book of Brighton history ever published (Life in Brighton, 1970), Clifford Musgrave described it as ‘one of the most imaginative and delightful improvements carried out in Brighton in the whole of its history’; and in the Pevsner Architectural Guide published in 2008, Antram and Morris praised it as a ‘sensitive infill … and still a model for urban renewal’.