On Tuesday 15 September we met with Oliver Spratley from the Council Highways Dept and Councillor Steve Davis from the Council’s Environment, Transport and Sustainability committee to discuss the detail design proposals for the Valley Gardens Phase 3.

Following our questions and discussions we put together the following which summarises our concerns and criticisms of the proposals as they currently stand.

We set out below our response to the detail design proposals following their recent publication and including matters discussed with you at the virtual meeting on 15 September 2020.

Our first point is that these proposals are not in our view “detail design”.  They are what we would term final sketch plans.  There is a distinct lack of the sort of detail we would expect to see in what appears to be the last chance the public will get to comment on the proposals.

Our primary concerns relate to matters affecting the city’s heritage and urban landscape and the attractiveness of the southern part of Valley Gardens as a public space, rather than the more technical aspects of the proposals such as traffic and  cyclist and pedestrian movements – although we would include such topics within our remit where we consider the proposals would have a detrimental effect on our primary concerns described above.

The whole area of this part of Valley Gardens is incredibly important to Brighton;  it is the showcase of the city, including as it does the Royal Pavilion and the open spaces surrounding it, the Old Steine and historic Steine Gardens as well as the area of seafront promenade at and along both sides of the Palace Pier.

It is the historic heart of Brighton, familiar to tourists from all over the world, as well as being a vital part of the city’s character and attraction to its residents.

It would appear from the comments we received at the meeting that the detail design will be farmed out to whichever contractor is appointed to carry out the civil engineering work.

That really isn’t good enough.  An area of this importance needs to be properly designed and the brief for that design needs very careful thought and public involvement, including all the heritage considerations which are affected.

Looked at from the perspective of its historic character and value, the detail of its design and its appearance is really important.

Where is the detail of the urban landscape?

Will there be a variety of paving materials to add visual texture and interest?  What are the proposals for the paving?  There seems to be nothing but acres of buff coloured concrete paving slabs.

Below are a few photographs of Phases 1  and 2 which illustrate our concerns. They show how stark the landscaping can become – this isn’t the green peaceful oasis that we were promised. 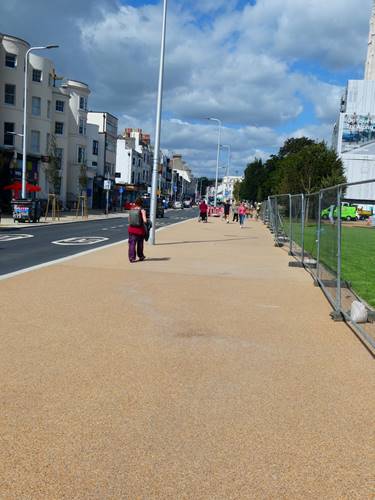 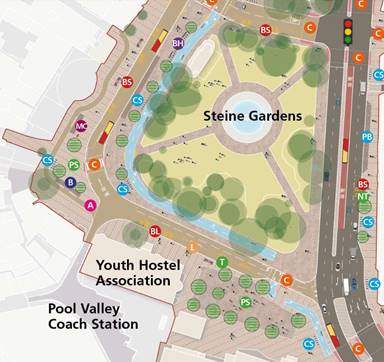 Old Steine.  If this resin based aggregate is to be used for the paving of the huge area in front of the Royal Albion, it will just look awful.

And there are hardly any new trees around the west and southern sides.

Public squares in so many continental cities have patterns of wonderfully varied textured paving layouts – combinations of stone slabs and kerbs, cobbles, granite setts, clay paving bricks etc.  Where are they here?

What sort of street furniture is proposed? – lamp posts, cast iron railings, tree and shrub planting, tree guards, rubbish bins, signage (including signs explaining historical information), seating – particularly along the seafront promenade and in Steine Gardens, and sympathetically designed shelters where tourists and others can take refuge from seaside showers?

What proposals are there for public litter bins and recycling bins?  Hopefully not the standard large black plastic rubbish bins and/or steel containers. Will measures be put in place at the outset to ensure the bins are regularly emptied, particularly at weekends?

What measures will be put in place to ensure the area remains attractive and is properly policed against vandalism and graffiti?

To what extent have the police been involved in drawing up the proposals?  Will there be CCTV to allow the activities of vandals to be monitored?  Will the police be committing additional resources to ensure the area is protected?

What are the detailed landscaping and planting proposals?  Will the Council be dedicating maintenance staff to ensure the soft landscaping and grassed areas are regularly maintained?

To what extent will events be permitted in the area and if so, will event organisers be required to restore grassed areas from damage.

Are security barriers proposed and if so where?  What will they look like?

Art deco bus shelters.  There appears to be no proposals as yet for how these listed shelters might be used. We are concerned by the suggestion that they might be extended – this would have to be done with extreme sensitivity unless the reasons for their listing were not to be compromised.  We would prefer them to be retained very much in their current scale, form and appearance, though we could contemplate their use things such as coffee booths or for displaying tourist information.

We are equally concerned at the suggestion that The Brighton Experience may become involved – we have serious reservations about the way in which official encouragement of “public art” only incentivises the activities of exponents of the graffiti culture afflicting the city. The unwelcome graffiti regularly applied to the bus shelters shown below are a prime example of this.  The council needs to look beyond the stock response of “let’s paint a mural.” 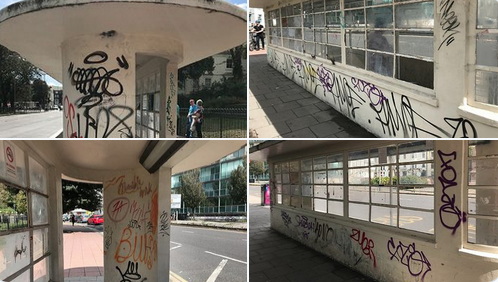 So those are the unanswered questions.

What about traffic etc.?

Firstly – the pollution problem.  Will a full Environmental Impact Assessment (EIA) be carried out?  We remain unconvinced by the response we received that an equivalent study will be undertaken.

Secondly  – the collision of cycle lanes, heavily pedestrianised areas and vehicular traffic at the new traffic light intersection near the end of the pier looks like a disaster waiting to happen. 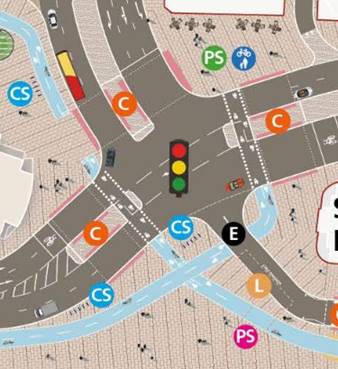 The two cycle lanes cross at the   point where the one pedestrian crossing has been proposed.  This area looks unbelievably dangerous.  Also one of the cycle lanes then crosses the road and ends up in an area of joint pedestrian/cycle use in front of Harry Ramsdens.  On busy weekends this area is packed with pedestrians – can this layout treally work safely? 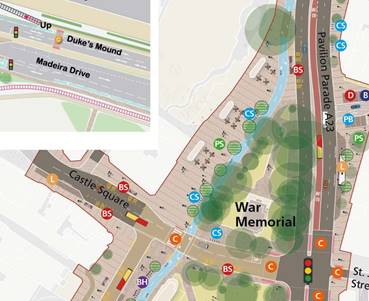 Thirdly – Castle Square.  We cannot understand how all the buses that currently come down North Street and turn left here will be accommodated by the new scheme.  It is not unusual to see up to 8 buses lined up at the Art Deco bus shelters so it is a mystery how the two bays in Castle Square will be able to cope.

Fourthly – we are concerned that the new Covid cycle lane just to the west of the pier if left as a permanent feature, will completely wreck the validity of the traffic congestion projections and the environmental pollution studies if it is allowed to remain in place.  You assured us it would be temporary, but we would like to see this officially confirmed by the Council, particularly as the Green party are on record as wanting the whole seafront road to be car free.

We consider that the Council Highways Dept is really weak on issues of design.

Apart from the concerns discussed above, we discussed a typical example of this lack of attention to detail where the beautifully restored Victorian lamp post is disfigured by a totally unsympathetic traffic sign. 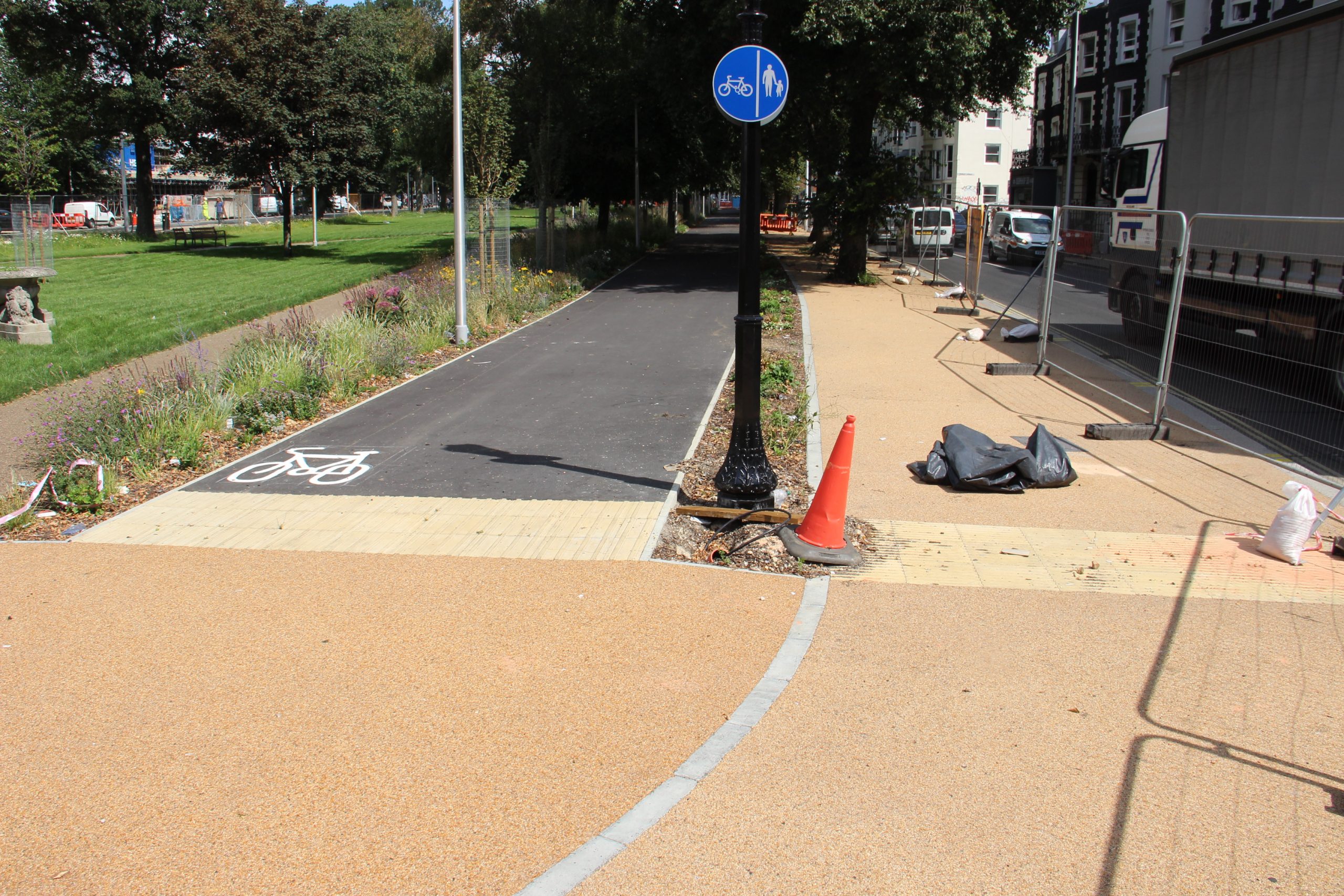 This sort of situation should never have been allowed to happen.  Who makes (or fails to make), these decisions?

The proposal to let the civil engineering contractor responsible for making these judgements in Phase 3 fills us with foreboding.

We ended our discussion by saying we would  appreciate being consulted and engaged in the subsequent briefing and design stages and during the post-completion monitoring stages.

We very much hope you will take up this offer.