Toad’s Hole Valley scheme – Our comments on the initial proposals

Verdict – promising start but major traffic problems down the road!

St Congar are a nationally based property company who specialise in mixed-use and commercial developments around London and the South East of England. It is working with the Toad’s Hole Valley landowners to bring forward the site in line with the SPD. St Congar will not build the development site itself, but will sell parcels to other developers and/or housing associations to deliver.

They have now made public their plans for public consultation. 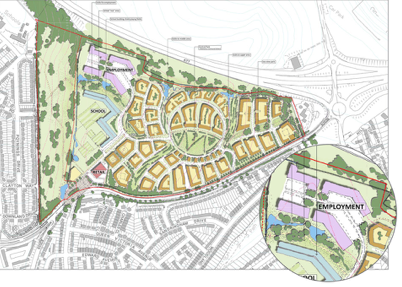 Layout
In principle we like the proposed layout, with residential accommodation arranged informally around enclosed public or private open spaces.  We think the employment area is well located on the south-western edge of the site near the A27 boundary.  We question the proposal for the school – though there is a severe shortage of schools in the area, the site looks too small to be of any use as a secondary school. Whether a primary school might be a better solution needs to be the subject of more detailed discussions with the Local Authority.  There is a severe shortage of Medical Centres in the local area and inclusion of such a facility within the proposals we think would be very welcome. 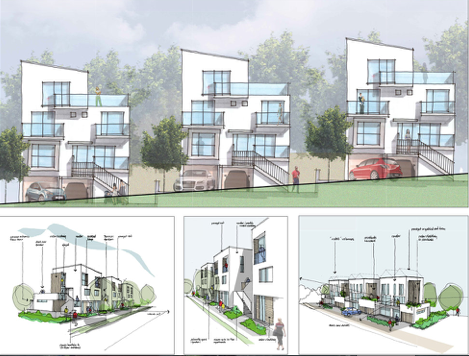 Housing
In principle we like the relatively low-rise housing proposals of generally no more than 3 – 4 storeys.  We believe very much in the principle of low-rise, high density, particularly when the housing encloses squares or open spaces as are proposed.

We are in favour of a good mix of housing and are pleased that 50% of the housing proposed is family sized (presumably these will also include garden space), as this figure relates closely to the defined housing needs of the City.  So many developments recently proposed provide mainly 1 – 2 bedroom flats and ignore the substantial demand for housing for young, growing families.

We also are pleased to see that 40% affordable housing will be included.

Density could be higher

In terms of overall density we think that 50 dwellings per hectare (dph) might be set too low.  We would prefer to see the balance between high-rise on the one hand and low rise on the other tilted in favour of increasing densities by a relatively small amount at the low-rise end of the scale, and decreasing the height of the high rise schemes – the top floors of high rise buildings would only contribute to about 2% of the projected housing need of 13,200 new dwellings anyway.  A simple adjustment of increasing densities in the new housing planned on the outer fringe of the city from 50 dpu to 55 – 60 dpu would provide a much higher figure than that, without resulting in a significant change to the appearance and character of the new housing.  Every opportunity should be taken to increase the housing numbers – for example building over retail and community facilities with flats, should be considered (within the overall height constraints proposed).

Imaginative use of sloping. site

The housing design needs to be developed into more detail, but we think that the steeply sloping nature of the site could result in some imaginative design solutions which exploit the level changes to create car spaces and access on one level and relationships between living spaces and private or public gardens on another.  In terms of character, we think something which takes its inspiration from Italian hill towns could be appropriate for this site, with buildings and roofscapes stepping down the steep slopes.

Choice of materials is also important – although we quite liked the appearance of the sample designs on display, we are very aware that the white rendered finishes which have proved popular for new housing in recent years do not weather well, and opinions are beginning to turn against these finishes in favour of those such as brick which weather much better.  Much of the existing housing to the east of the site is of course mostly constructed of brick with tiled roofs.

It is unclear whether the open spaces enclosed within the housing layout will be private gardens or public open space, though both could be appropriate depending on the size and types of accommodation proposed.  Public open space is perfectly acceptable provided that it is well designed and appointed with proper landscaping, planting, seating, play equipment and paved and incorporate soft landscaped areas – and most importantly – there is provision for ongoing maintenance into the future. 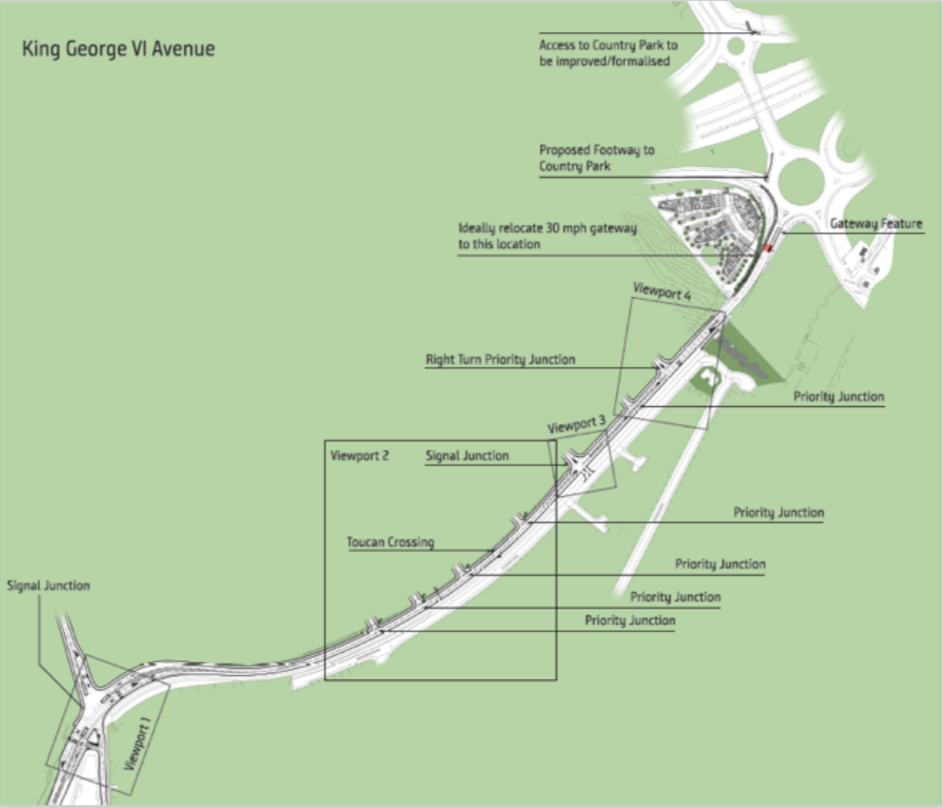 Traffic and parking
This is by some margin the weakest part of the proposal.  King George VI Avenue is a busy fast-moving arterial road on a very steep slope.  At the top end of it is a roundabout system over the A27 which is pretty much at maximum capacity already for much of the day.

New traffic lights at the top, middle and bottom of the Avenue will create standstill conditions which will in turn cause traffic back-up problems on the A27.  We just can’t see it working.  The dangerous junction at the bottom of the Avenue at the intersections with Goldstone Crescent and Nevill Road may result in a safer situation – but only because much of the time the traffic will probably be stationary.

From our soundings taken from the local community, everyone seems to agree with this view.  We think it will be essential for traffic assessments and predictions to be carried out and made publicly available.

We note that generally parking within the housing areas is proposed to be on a one to one ratio with off street parking proposed.  This is fine but how will additional parking be dealt with and controlled?  The last thing anyone would want to see is cars blocking narrow access roads, being parked on grassed or landscaped areas – or even worse – the problem being carried over into areas outside Toads Hole Valley, into streets in the surrounding residential areas.

Infrastructure
We have previously raised concerns in response to the SPD consultations carried out by the City Council over the capacity of the existing infrastructure outside the site to cope with the additional surface run off and sanitary drainage systems in the area.

We see that SUDS systems are proposed to reduce the risk of flash flooding – but the water still has to go somewhere.  Where does it go and can the existing drainage system cope?  And if it can’t who pays?

We need answers to these questions.