Thirteen leading amenity societies in Brighton & Hove have signed a joint statement condemning the redevelopment proposals for the Gasworks site in East Brighton.

A brief description and illustrations of the proposals may be found towards the end of this article following the Joint Statement set out below.

The fourteen societies and community organisations include:

AGHAST – the group of local residents who oppose the development.

Here is their statement:

We welcome the use of this brownfield site for housing
We support the use of this site for new housing on condition it can be safely developed to provide a significant amount of affordable housing for local people and makes a serious effort to aspire to Council Policy CP20; includes community facilities; makes a significant contribution to the city’s public open spaces and respects the city’s historic character, its architectural heritage and its marine and landscape setting against the backdrop of the South Downs National Park.

Climate change and consequences of Covid
These objectives cannot be considered in isolation from the real and pressing national objectives concerning climate change and protection of the environment as well as the health, societal and economic needs exposed by the coronavirus pandemic, including the documented drawbacks of living in high-rise blocks.

This is an opportunity for a truly sustainable development that plays its part in a ‘circular economy’; with green roofs and solar panels, employing sustainable building materials whilst creating healthy human-friendly homes and community spaces for its residents.

The Berkeley Group’s proposals guarantee none of these as yet. We are hoping that they will adopt a fabric-first approach.

Density and height
This development site is not in a Tall Buildings area or corridor defined in the 2004 Tall Buildings Study or the current City Plan. It is unsuitable for tall buildings because of its situation on a cliff, proximity to heritage assets and the relative height of all other buildings around it.

The Council wants effectively to create a new Tall Buildings Area specifically for the Gasworks site through a new SPG and, we suspect, specifically to give this proposal some form of justification. If approved it would set a terrible precedent for other areas of the city, where policy could be overturned to fit with a developer’s needs.

The previous expected limit of 85+ residential units in the City Plan 2016 have, under this proposal, become 600 to 700. This is a huge overdevelopment of the site, as recognised over the last decades. The developer claims that its vision of high-rise blocks “knits into the existing environment”; it does nothing of the sort. Instead, it ignores the neighbouring two- and three- storey homes in Arundel Street and mocks the Grade I listed buildings of the Kemp Town Estate and other adjacent heritage assets and conservation areas, all of which are a maximum of four to six storeys tall.

High-rise is the wrong solution. Let the sun in. A far more acceptable solution for this site would be a low-rise high density design based around courtyards and terraces formed by new residential buildings which would relate politely and sympathetically to the scale, height and character of the surrounding residential areas and incorporate generous sunny, secure and family-friendly landscaped open spaces for residents and the general public. This is what the local community wants. The developer’s proposals do not let the sun shine in.

Low-rise enables shallow foundations with minimal excavations resulting in less spread of contamination. High-rise is the opposite and requires deep and intrusive excavations.

Responsible development in the light of Covid
The responsible developer should be looking to provide more considered design proposals different from the typical high-rise mass market proposals at other sites such as the Marina. In the post-pandemic ‘new normal’ do people really want to share usage of that high-rise lift? Do they now want to ‘co-work’ by mixing with others in the proposed commercial elements when home working is now the preference? Pause this proposal – listen to the community.

Contamination issues
This development needs to meet the most exacting standards on safe development of the area. According to the developer’s documentation, contamination toxins could “present an environmental and human health risk” for years across a large residential area, including ten schools and colleges and our main hospital. These impacts are real and happening now at National Grid sites developed by Berkeley Group. People living near the Berkeley Homes site in Southall speak of breathing difficulties, the onset and worsening of asthma, eye irritation, irregular heartbeats, migraines, skin rashes, chest infections, nausea, dizziness, memory problems, a sensation of “internal burning” and other symptoms, including sudden onset terminal cancers. Some said they only felt well out of Southall. Older people deterred young relatives from visiting.

Today more than ever it is imperative to protect the environment and health; to create a safe, healthy, happy neighbourhood which is toxin free and carbon neutral – during phases of construction as well as during lifetimes.

Responsible development – in the public interest
This developer states without high-rise development “benefits of redevelopment such as affordable homes, public open space and S106 contributions towards wider community benefits cannot be delivered.” Yet Berkeley Group’s own founder, the late Tony Pidgley, pointed his Group away from ‘overdevelopment’ in his commitment to communities when he said: “landowners and developers should be forced to share ‘planning uplift’ with local authorities.”

This developer has misunderstood Brighton & Hove City Council’s request for “Higher density mixed development”. The term ‘higher’ does not refer to the number of storeys. This developer itself states “Low-rise heights respect existing … referencing the typical domestic terraced streets of local Brighton.”  We cannot say it better.

Back to the drawing board please.
Brighton Deserves Better.

Yours sincerely,
All the undersigned to this Joint Open Statement

Note: All quotes in italics throughout this statement are taken from the Berkeley Group literature

Brief description of the development proposals 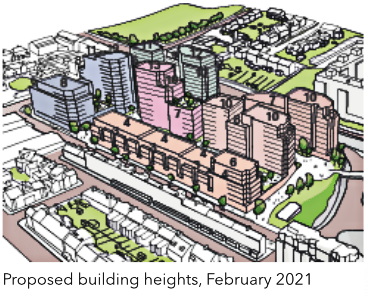 To the right and below are a selection of images showing the scale and massing of this totally inappropriate high-rise urban conglomeration more characteristic of a central city location, towering over its surroundings perched high on the cliff top above the Marina. 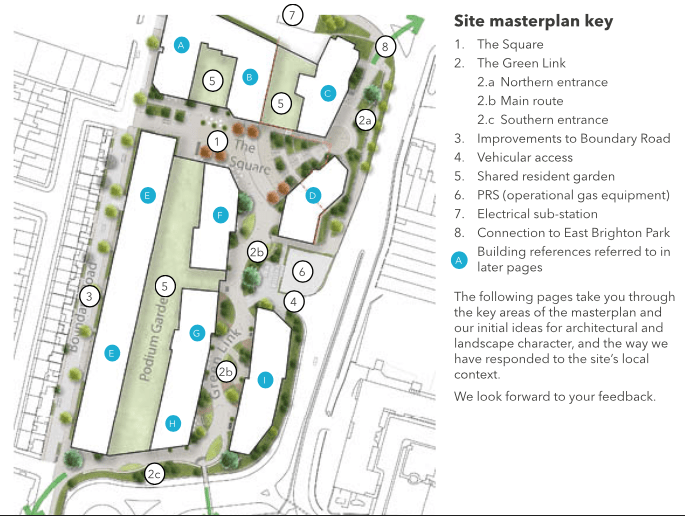 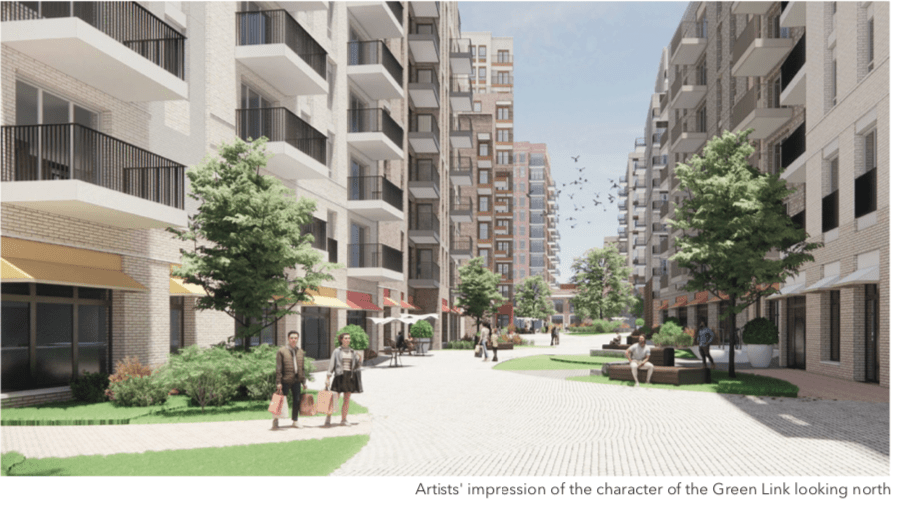 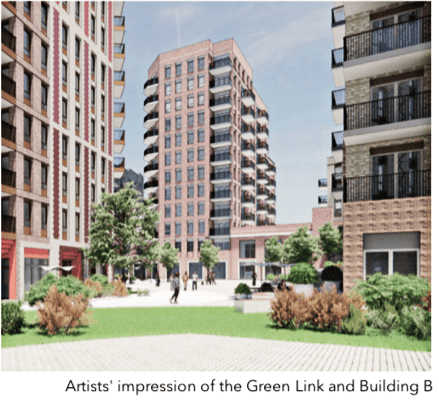 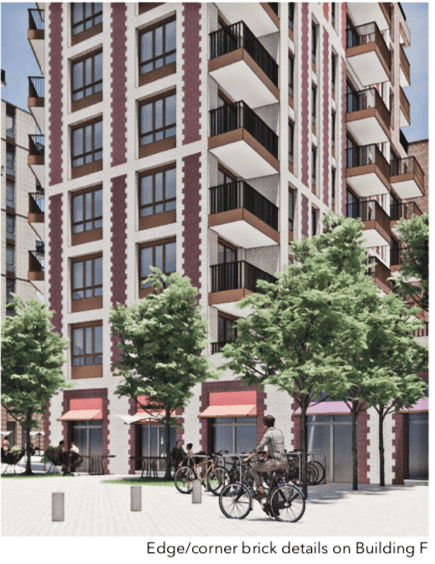 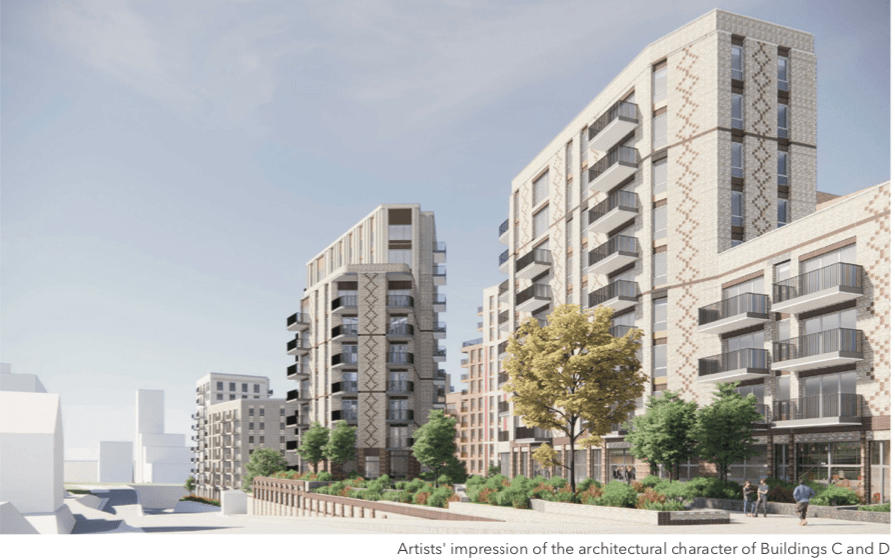 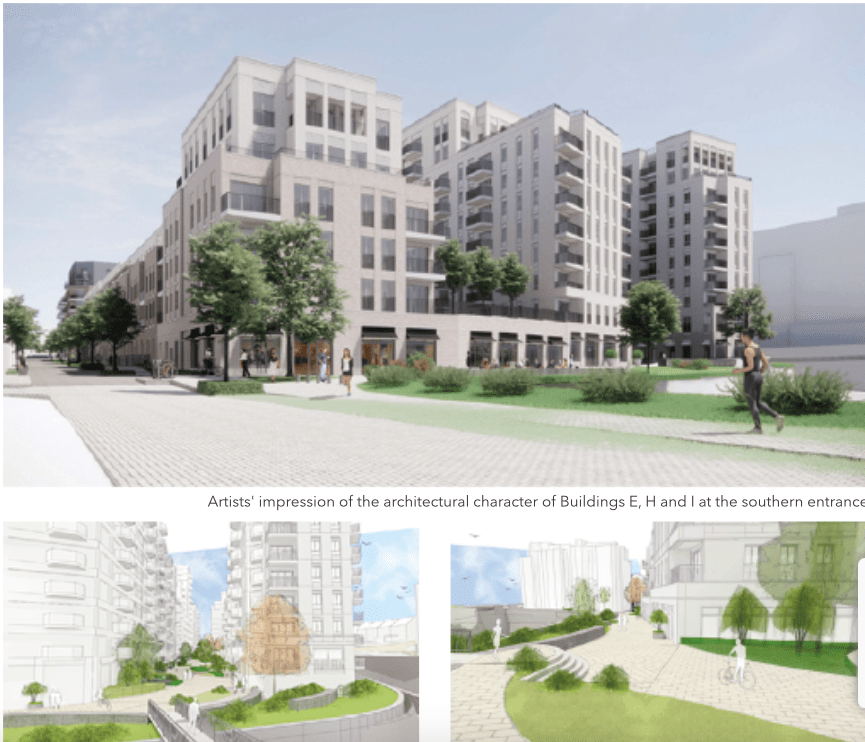 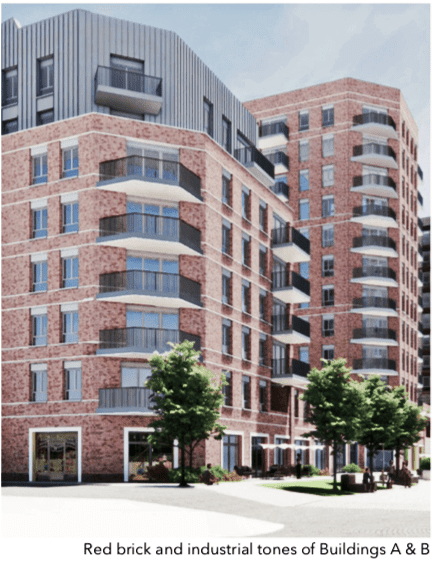