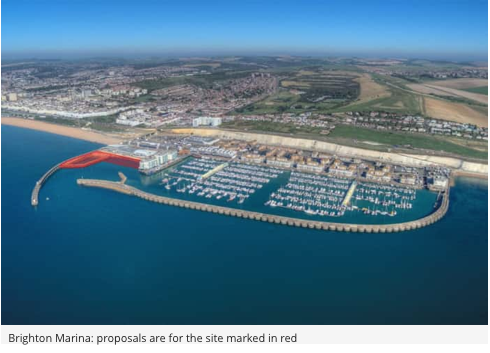 After many years of controversy and uncertainty over successive planned major developments for housing at the Marina, two large blocks were erected as part of the first phase of the massive scheme that retains current planning approval. This allowed for several hundred flats in large buildings including a forty-storey tower. A campaign by local residents to get a judicial review ultimately failed in the courts.

Following the most recent change in ownership, the shaping and designs of the remaining development have been extensively altered by the Outer Harbour Development Company Partnership, and a series of exhibitions and presentations have been undertaken to provide consultation on proposals for the second and third phases.

In November, plans were revealed involving a reconfiguration of the central and eastern blocks and a reduction in height of the tallest tower to twenty-eight storeys, which is four storeys greater than Sussex Heights. The second tallest building would be of seventeen storeys. Facing the harbour water along the south of the site, the line of buildings has been merged, forming a continuous symmetrical crescent with a single gap at the centre, broader than those previously separating the buildings. The building adjoining the tall tower extends to the north, overlooking the west harbour wall, featuring two garden spaces, one public, one for residents. 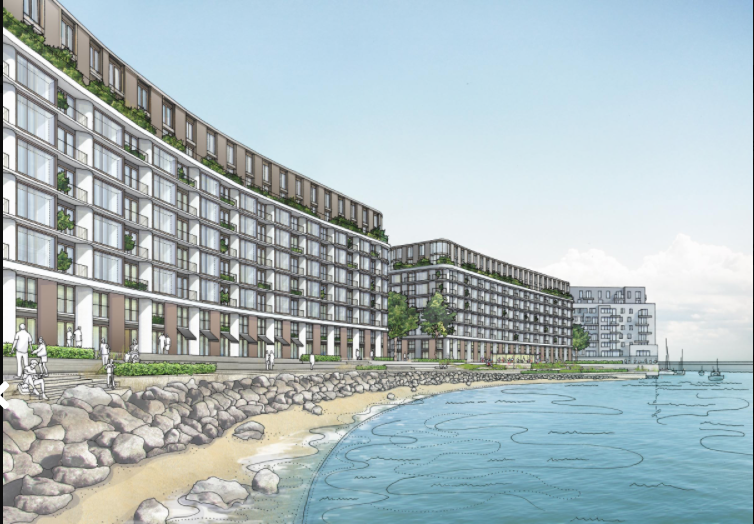 The architects have responded to a substantial list of observations and reservations from formal consultees the South-East Design Panel, resulting in changes from their initial ideas. An approach involving stylistic themes inspired by regency architecture was therefore rejected in favour of a design pattern more modern and “playful”.

The enormous number of housing units required by the authorities’ demands, together with the existing planning approval, means that an immense loss of sea and sky views is inevitable whatever the detailing. Part of the challenge to the architects should be to produce contours and aspects that respect the natural outlook. The developers and architects are well aware of the prominence of all the proposed western buildings when viewed from the grade 1 Kemp Town estate, and from all along Marine Parade and Madeira Drive as well as from the cliff tops above and to the east of the Marina. The original apparent principle that no structure in the Marina should rise above the level of the cliff height may have become a lost cause, but the city’s policies for the rest of the eastern seafront continue to adhere to the principle.

When huge buildings dominate the landscape and block important views, we lose vital aspects of our city’s heritage which is defined by the character of our coastline, the sea, the hills and valleys, the South Downs – all the natural topographical features which give our city its unique character and are part of its attraction. The view of the sea from the cliff top was a critical part of the discussions during the consideration of the previous scheme. The individual residential blocks did at least leave significant views of the outer harbour and the sea. During the presentations for the latest scheme the architect has confirmed that when viewed from the cliff top the height of the blocks will block any view south up to the level of the horizon. The development will be so bulky that it will remove any view of the sea for anyone walking along the cliff top – a very significant change. 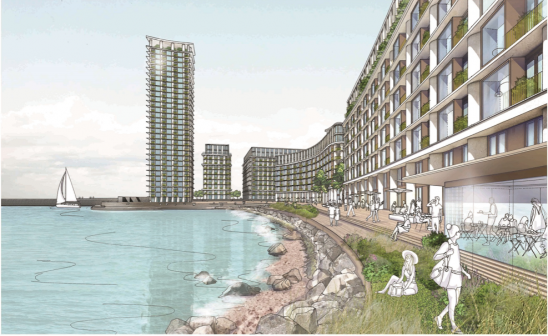 The design of the buildings is very different from the previous scheme. The curved individual residential blocks have been replaced by much more solid rectangular blocks and the 42 storey tower has been replaced by a much lower tower but of a very bland rectangular appearance. The word “iconic” was often used by the developer of the previous scheme, and that design certainly included some interesting shapes. The word “iconic” could not possibly be used for the new scheme.

It does not seem to recognise that the development is part of a marine landscape. The architects have used the term “urban” to describe some of their projects in London and in many ways their proposal for the Marina would be far more suitable for an inner city location. The grid layout and the repetitive design of the elevations will certainly bring an urban feel to the development. The blocks will bring a very domineering presence to this part of the Marina.

The joining up of the southern buildings to provide one central intervening avenue is causing some concern over the loss of previously proposed views through from the north; and although the western open spaces are supposed to include horticulture suitable for an exposed marine setting, the project is aware that much of the open spacing will necessarily be hard-surfaced.

We were very disappointed that the new developer has chosen not to embrace and progress the earlier proposed swing footbridge across the harbour entrance. This would have been a considerable asset to the entire Marina by increasing footfall on the eastern breakwater and, in summer at least, given a boost to the businesses at the eastern end.

Our understanding is that one reason for the cancellation of the bridge plan is a potential inconvenience to boats. However, provided priority is given to water traffic at all times, as it should be in a marina, we suggest that the inconvenience to boats of a bridge will be minimal. It should surely not constitute a main reason for rejecting the footbridge without thorough research into how the bridge would be operated at different states of tides and throughout the seasons. 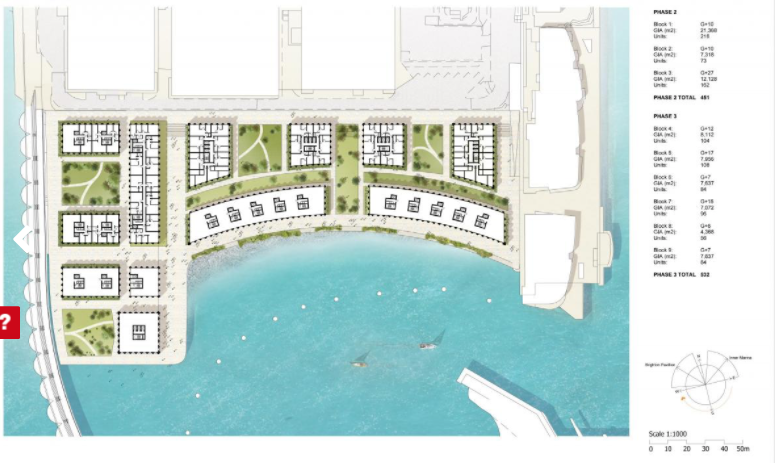 Detailed architectural designs will be introduced at an exhibition on 9 January, 4-8pm, at Malmaison, Brighton Marina, BN2 5WA; and then available to view online from 10 January at www.outerharbourdevelopment.co.uk
Images are from the development proposals website:
www.brightonmarina.co.uk/associations/212-development