You are at:Home»guest column»Shoreham Harbour : was there a failure of planning?

This article is contributed by the Kingsway and West Hove Resident’s Association (KAWHRA) and describes a near failure of planning procedures which was averted at the last minute by KAWHRA.

A joint team of planners was set up to produce the Shoreham Harbour Joint Area Action Plan (‘the JAAP’). Funding was available for special background studies. These included a Development Brief for Hove’s part of the harbour (Aldrington Basin and South Portslade), prepared by urban design consultants as a basis for the JAAP. 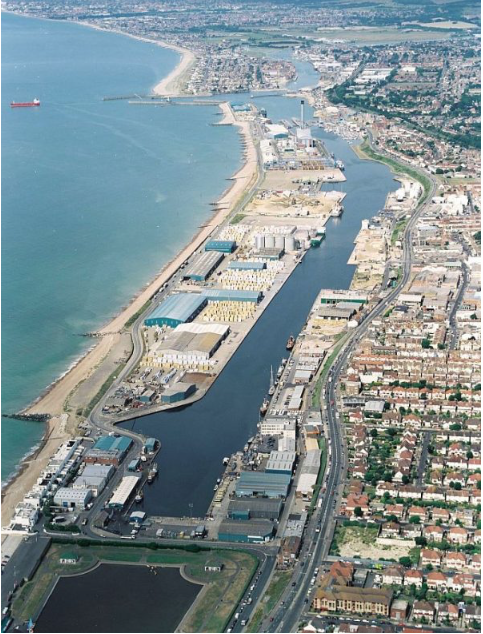 Aldrington Basin lies some 6 metres below the open south side of Kingsway, while the attractive interwar residential suburb of west Hove lies on the north side of the road. The Brief proposed that a line of multi storey buildings be built on a very narrow strip of land in Aldrington Basin that runs alongside Kingsway. These would have non-residential uses at Basin and Kingsway levels, and flats on the upper floors.

However at this point Kingsway narrows to two lanes and these taller buildings would be closely to the south of the existing two-storey homes opposite. So the issues of overshadowing and townscape were of critical concern to Hove residents who became actively engaged in consultations.

The Kingsway and West Hove Residents Association (KAWHRA) demonstrated the times of year when then sun would never rise above buildings of various heights. Eventually in 2013 the city council commissioned an expert analysis of overshadowing, and ward councillors also persuaded the council to limit the height of buildings rising above Kingsway in the interests of townscape balance.

Beginning in 2012 four versions of the JAAP then followed before at long last the final version of the JAAP was agreed by the councils in late 2019. For residents of west Hove this final version is much better than the emasculated one that the council had previously submitted for examination by a Government planning inspector.

View of harbour from the west

The inspector held a public hearing into the soundness of the submitted JAAP in September 2018. This was the final legal requirement following public consultations on four versions of the JAAP approved by council since 2012.

Three draft versions had included guidance about the height of new buildings in relation to townscape and overshadowing by new buildings in the development area on the south side of Kingsway. However in 2017, when proposing the final version of the plan to be submitted to the Secretary of State, the planning officers dropped the guidance for development on the south side of Kingsway without indication, explanation or justification.

Ward councillors tried to get this changed at the committee, but despite this the officers steamrollered the JAAP through the committee unaltered.

KAWHRA’ s objections to this unjustified abandonment of policy were submitted to the planning inspector at the Public Hearing. We explained the sensitivity of the west Hove townscape. We demonstrated how the council had arrived at the version of the policy for development south of Kingsway incorporated in all previous versions of the plan by utilising a professional analysis of the overshadowing impact of various new building heights.

Therefore, we were shocked that when asked by the inspector the planning officer as well as the landowner denied that there had been any specific sunlight and daylight impact studies carried out for the council for the height of development south of Kingsway in relation to effects on existing homes on the north side.  We were able to give the inspector the full titles of the two detailed studies on this commissioned by the council from the Building Research Establishment in 2013.

We consider it totally inexcusable that, after the commissioning officers had left the councils’ employ, the current planners had not made themselves aware of the evidence that was the foundation for the policies for new development in such a sensitive area as west Hove.

Following the Hearing the inspector asked officers to propose modifications to the JAAP.  These included major changes relating to the plan-wide policies for development in the JAAP area to provide a much more detailed consideration of townscape, and issues such as sunlight and daylight impact on existing homes. In her report on the soundness of the JAAP the inspector said that overall the submitted plan had been insufficiently precise on such matters, but that the significant modifications proposed following the hearing (policy SH9) now provided appropriate advice on design issues that will be considered by the council in assessing all new schemes.

The inspector’s specific comments about development south of Kingsway were:

Taking into account the difference in land levels involved, it will be particularly important that the redevelopment of the site is undertaken sensitively, so that any new building respects the living conditions of neighbouring residential occupiers on Kingsway.  Policy CA2 does not include specific height limits for such development.  However, I am satisfied that such restrictions are not necessary, as Policy SH9, as amended, would enable sufficient safeguards of this nature to be secured, whilst providing a sufficiently flexible approach to the redevelopment of the site.

Therefore although there will not be a specific design policy for the site south of Kingsway, we welcome the much stronger plan-wide urban design policies resulting from the hearing. The sensitivity of the attractive residential area lying north of Kingsway is something that KAWHRA successfully established with planners originally involved in the earlier stages of the JAAP.

Spotting and challenging the unexplained abandonment of all of this by successor planners in the latter stages of the JAAP’s progress has needed KAWHRA to maintain an active watchdog role over 7 years.