The new lease of life to rejuvenate Peter Pan

“We feel that this project could only be in Brighton. A shout not an echo.” This is the sentiment expressed in Sea Lanes’ declaration of their vision for the vacant site at the Peter Pan playground by Madeira Drive. 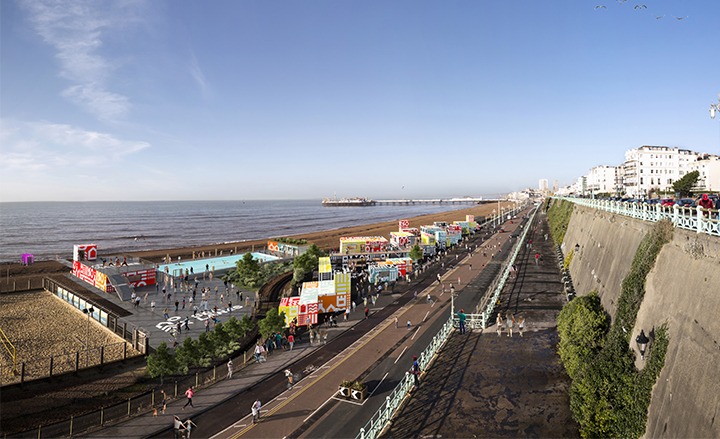 If a colour scheme can be regarded as loud, then the graphics illustrating Sea Lanes’ proposal can be said to present quite a clamour. The core of the development, a swimming pool, might look an inviting classic blue, but the larger supporting development is thoroughly multi-coloured.

Composed of an assemblage of box-like modular units, the accompanying scheme’s elevations are a medley of red, orange, yellow, blue and black, all boldly patterned in white.

“Vibrant – colourful – creative.” A motto of the city’s main tourist service has also inspired these designs for this fixed-term project whose planning application is now online for comment (BH2018/01973).

A five-year lease has been granted for the local consortium to trial a minor version of the greater long-term ambitions they have for the site. There would be an option at the end of the five years to proceed with the agreement of their existing 150-year lease, in which case the long-term development would be of twice the volume.

The fundamental feature in the present proposal is a 25 metre heated swimming pool open to the general public, while the accompanying development of lightweight buildings will serve a variety of commercial functions.

The tone of the five-year scheme is intended to be relaxing, and while less hectic than the seafront between the piers, nevertheless vibrant. Historic England have been made aware of the principles of the plans, which aim to represent an influential contribution to the revitalisation of Madeira Drive; and pre-application presentations have been made to councillors.

The development will extend over the beach towards the sea, exceeding the existing south boundary of Yellowave by about a further sixth from Madeira Drive. It will not rise above the level of the Madeira Terrace, and the Volk’s Railway line will stay in place, with trains passing through the development area. Shingle vegetation will be recreated in neighbouring areas of the beach to compensate for any displaced. Opening hours will be from 6am to 10pm, and the site will be well lit and secure.

Currently the hard standing area has been fenced and painted yellow. At the east end, close to Yellowave’s beach volleyball courts, a two-storey cabin has been erected, the upper part of which, accessed by external steps, and featuring a small window on one side and a larger window at the opposite side, contains a model of the proposed development. 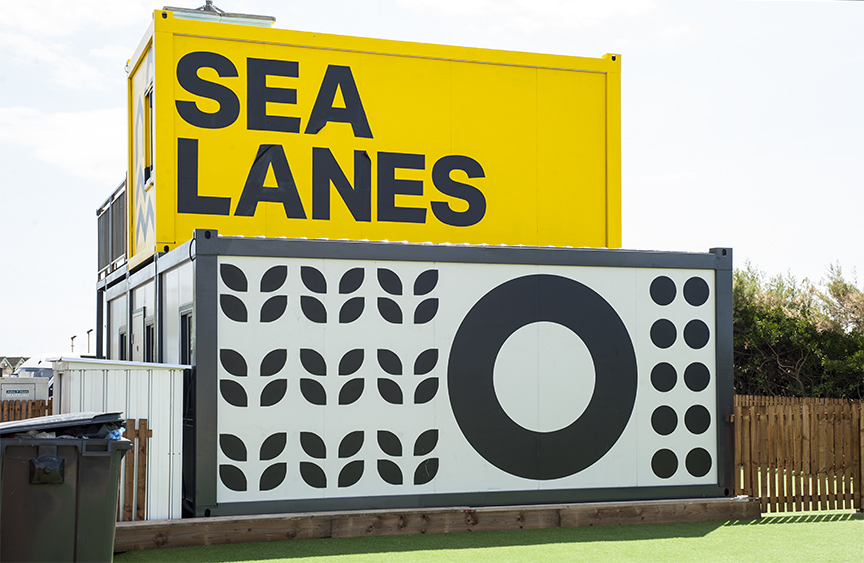 The modular units will be of the same material and character as this preliminary two-storey construction; the cladding is a combination of paint, vinyl and PVC. They will be arranged in groups, mostly two-storey, two being three-storey, with diagonal gaps (from north-east to south-west) between the groups, providing thoroughfares and sea views from Madeira Drive. The units are said to be suitable for usage as retail, health and fitness, therapies, office space and food kiosks.

The stainless steel pool will be sunken in the beach, in the south area of the development. There is to be a path from the pool down to the sea, in the form of a retractable mat. Access to the pool will be via either of two gates across the railway. To the east of the pool will be a raised platform, and to the north-east a spacious flat dark-surfaced decking concourse.

The participants in the Sea Lanes consortium include Brighton Sea Swimming Club, Swim Trek, QED Sustainable Urban Developments and Copsemill Properties. They have endeavoured to form a cooperative relationship with Saltdean Lido, promoting the latter’s campaigns and hoping to share some marketing and ticketing arrangements.

It is true that there has been a long and varied history of recreational amenities at this site, and by no means always related to, or sympathetic to, the Madeira Lift, Shelter Hall, Walk and Terrace opposite; the tradition of annual and seasonal single events held on the Drive is nothing if not colourful or occasionally loud; the Volk’s Railway buildings and Yellowave facilities already encroach considerably on the shingle; and Madeira Drive has long been in chronic need of enhancements. 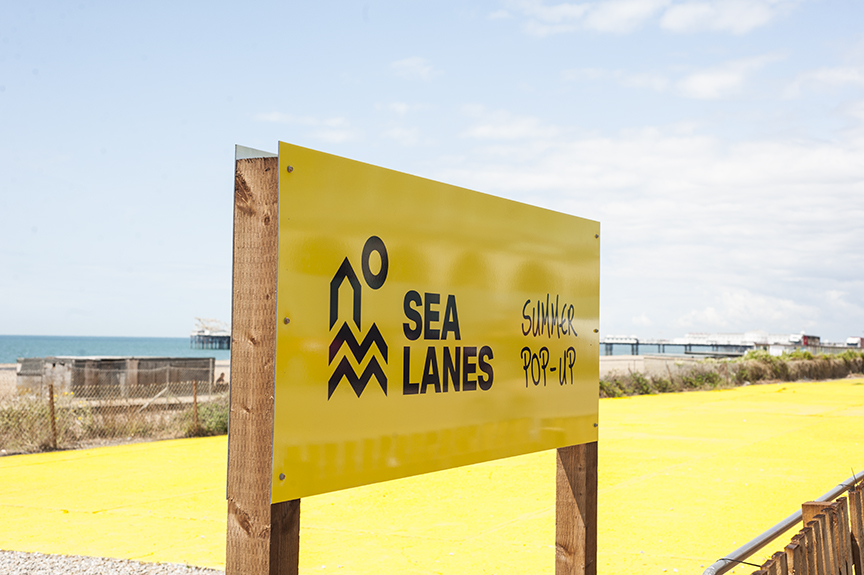 Nevertheless, the setting of the long line of open shingle, the great Madeira Wall adorned by a unique showcase of ornamental infrastructure, the relationship with the elegant grandeur of Marine Parade above, and the value of the tranquil stretches and sea views of the promenade – all these present a challenging task in the search for sensitive and imaginative development here, quite apart from the issues of public finance and commercial risk.

While the enthusiasm and commitment of the applicants is not in doubt, and the idea of forging a connection between a swimming centre and the sea is an interesting one, there will be real concerns regarding the loss of sea views, the encroachment over shingle and the prospects for the weathering of the structures during a period of five years. Public opinion of the scheme  should be fascinating to follow – not least the reactions to the box-like units and their colour scheme.