You are at:Home»developments»Planners vote to demolish historic Brighton schools – a shabby story of neglect of civil duty

The Planning Committee have voted to approve the Greater Brighton Metropolitan College scheme to demolish the historic York and Trafalgar Buildings and sell off the site to developers, to build 135 flats.  No proposals were put forward to include affordable housing and no proposals to even appraise the possibility of converting the existing buildings.

Only two councillors voted against the application with Cllr Childs the only person speaking out against the proposal. To quote from the local news outlets “Architecturally, I think it’s vulgar and nasty.  You’re pulling down one of the Simpson’s Brighton Board Schools and replacing it with a block of flats that could be anywhere.  The thing that really concerns me is what I can only conclude to be a gross neglect of civil duty by those involved in this development.  A development of this size without one affordable housing unit is an affront and an outrage to the people of this city. I think it is outrageous – and what irony that a piece of land that was owned and paid for by the ratepayers of this city and handed over to the private entity of the college in 1992 is now being disposed of and nothing being given back in return”.

Well neglect is a good way to describe the history of this application.  The Brighton Society opposed the first version of the “outline” application in 2013.  This mentioned the demolition of the buildings but as the application was an “outline” application it was always hoped that the college and the planners would at least look at alternative ways of using the school buildings.  Conversion of existing buildings can successfully be achieved and bring high returns to property developers – the Royal Alexandra Hospital is an excellent example. Last March the CAG objected to the application and recommended converting the buildings. But it seems that over the last six years no one got around to looking at conversion of the existing buildings as an alternative to demolition. And of course, the world has changed over the last six years.  The construction industry is now awash with reports on green issues and how converting buildings provides significant savings on carbon emissions. But no mention of such ideas was made in the documentation for the application.

And why did the committee allow for no affordable housing whatsoever?  Again, the last six years have seen increasing housing problems.  But one of the largest education establishments in the city seems to regard housing as a subject far from its own priorities.

The application documentation shows little interest in the history of the Trafalgar and York Buildings and the Conservation Officer dismisses the buildings in four sentences, even going so far as to say that they do not even meet the criteria for local listing.  (The Brighton Society tried to get them listed in 2013). Hard to comprehend. Both buildings were designed by the renowned local architect Thomas Simpson.  The York Building has been little altered with much of the original internal layout is intact.  The York Building is also historically significant in that when it was built in 1884 it was one of the first secondary schools in the country. It attracted numerous visitors with an interest in education from the UK and abroad who came to view the building and the education provision. At the time a nationally significant building but now just dismissed. 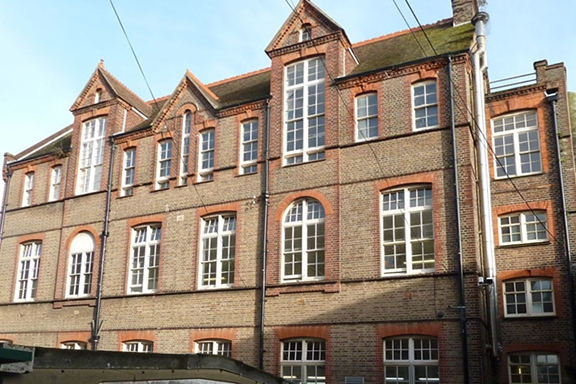 So, these important historical local buildings will be swept aside and replaced by a block of flats with little character. Surely, Brighton deserve better.