Phase 3 of the Valley Gardens – Landscape Design – our comments

The following comments on Valley Gardens Phase 3 are based on our discussions at a meeting attended by Oliver Spratley of Brighton & Hove City Council with Jeremy Mustoe and Malcolm Dawes from the Brighton Society. The document provided by the council was “Materials, Street Furniture, and Planning Studies” showing various details for Phase 3.

Although our discussions were centred around this document, we did have a wide-ranging discussion around the organisation and overall design of the Valley Gardens Scheme, and we made several specific comments on the completed Phases 1 and 2 of the Scheme which apply equally to Phase 3.

Organisation of the Overall Design of the Valley Gardens Scheme.

The original aim of redesigning Valley Gardens was to join the gardens to the western side of the city by removing the traffic lanes and to provide a “Green Oasis” for residents and tourists to relax and enjoy the open spaces of Valley Gardens in the historic heart of the city.

We fully supported this aim but consider that the phases already constructed and the plans for phase 3 have resulted in a severely watered-down version of the original idea. Instead of creating meaningful and attractive public spaces in which people could pause, sit down and relax in an attractively designed garden environment, the spaces appear to be primarily designed to accommodate large scale events, and in many other respects have been taken over by priorities for buses, cycling and vehicular traffic.  The original aim of creating a pedestrianised area for enjoyment and relaxation by residents and visitors to the city has become a low priority.

This appears to be a result of the way that the project and design teams have been organised.  The project Team appears to be complex with the lead consultant Project Centre (essentially Project Managers), producing a design primarily to satisfy pressure groups particularly the cycling lobby, with council staff having a secondary influence.  There appears to have been a lack of design leadership with no senior team member appointed at the commencement of the Scheme to ensure that the original aim of creating attractive traffic free open spaces was realised.  Many people seem to have provided individual input on a variety of topics both from the council’s staff and from Project Centre, but no one seems to have ensured that creating attractive “Green Oasis” public open spaces was the main priority.

Specific comments on the plans for Phase 3

The lack of comfortable places to sit is a major concern.  For groups of residents and visitors to meet and talk together, suitable seating should be provided and some shelter from the wind and shade from the sun, such as hard landscaping in conjunction with suitably located and generous enclosures using landscaping, trees and shrubs.

The plans as they stand only show a few single and unattractively designed benches in the middle of nowhere, unrelated to any planting, shelter or view. 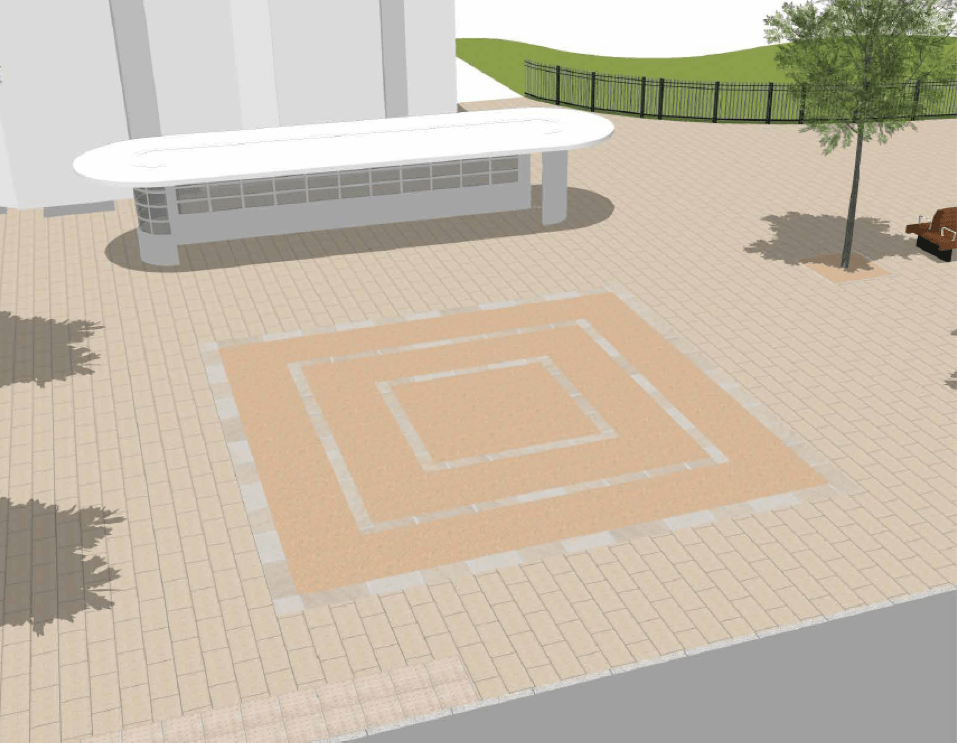 We are not impressed by the “Rug” designs in front of the Art Deco bus shelters (above). We strongly take the view that the layout of differing paving textures should be generated by different uses, not by randomly located abstract geometric designs.  For example static seating areas should be treated with a different paving material from movement zones, whether pedestrian or cyclists. Movement zones too should be reflected in the paving materials used.  Just dropping a paved “rug” into a large blank area of concrete paving unrelated to anything around it is a failure of design.

We think that paving patterns should cover a larger area and their layout should be designed in conjunction with the future use of the bus shelters and the spaces, landscaping  and seating associated with them.  As there are already problems with maintenance of sections of the resin-based footways in phases 1 and 2, which have already been replaced by black tarmac, we would consider that it is imperative for any patterning in the paved areas to be made of stone slabs or brick – Options 2,3,4 or 6.  Patterns 1 and 5 shown as resin could easily be ruined by black tarmac repairs.

The positioning of the cycle lane in front of the main entrance to the Royal Albion Hotel has significantly reduced any possibility of creating comfortable areas for seating.  We would have preferred the cycle lane – which is far too wide anyway – much nearer to the roadway which would have left a much more suitable area for seating.

We are concerned to see so many areas where there could be a clash between fast moving cyclists and pedestrians inadvertently wandering onto the cycle lanes – north of the bus shelters, in front of the Royal Albion Hotel and the area in front of the entrance to the Palace Pier. These defined cycle routes have lanes in each direction and pass through the middle of paved pedestrian areas.  They are incredibly wide – 4m – the same width as a residential roadway. Consequently zebra-type pedestrian crossings have been introduced at intervals to encourage pedestrians to cross the cycle lanes at restricted points, though how the public will be dissuaded from inadvertently straying into the cycle lanes and being at risk of being knocked over by fast-moving cyclists is a mystery.

Pedestrianised open spaces where cycle lanes share the area with pedestrians are potentially dangerous.  Pedestrians can so easily ignore boundaries to cycle lanes and this pattern of behaviour must be recognised and measures to resolve the conflicts included in any design proposal. It has to be accepted that some pedestrians will just be unaware of the  potentially fast-moving cyclists approaching, particularly from behind. Has a risk assessment been carried out?

Though cycling and traffic interests seem to have been well represented on the Project Team, no-one seems to have been representing the interests of pedestrians and the public at large – by far the largest group of people likely to use the open spaces of Valley Gardens.

We are concerned to see no trace of the existing mature trees that are in the western footway north of the bus shelters.  These are obviously valuable trees that should be part of the completed scheme. We assume they are shown on other drawings.

Comments on Phases 2 and 3.

We realise that financing additional work for these schemes may be a problem but our suggestions are not expensive so we hope that they can be achieved within the existing cost restraints.

The lack of any trees in the footway of the eastern side of St Georges Place and Gloucester Place has left an extremely desolate length of footway – any additional trees would help.

There are only a few fixed seats in Phase 2.  If potential use of this area for events is a problem, then benches with simple bolted connections at the base of the feet would get over any problem.  But again we question the priorities – why are temporary “events” more important than the long term interests of the users – residents, visitors and tourists?  Is there not room for both?

The concrete containers surrounding the existing large trees in Phase 2 could be used for additional seating. Wooden slats and arms bolted to the top surface would provide the additional seating at a low cost.  The beautifully designed concrete seating along Bexhill seafront was discussed as a good example of how this could be achieved.

The lamp posts in Phase 1 and 2 that were expertly restored, all have large round signs for pedestrian/cycle ways bolted to them.  Why not let residents appreciate the restoration by removing the signs.  It is very easy to work out which path is for pedestrians or cyclists and in most areas there are actually two pedestrian footways which is not shown on the sign anyway.

The Council has consulted us on previous occasions about the Valley Gardens proposals. Our comments and suggestions seem to have been consistently ignored.  We have to question whether the Council actually attaches any value to the public consultation process.