At the Brighton Society’s May committee meeting, l was tasked with asking the following question to retired engineer and local historian, Trevor Povey, who has a long-standing interest in the city’s water supply:

What percentage of the city’s water flows through aquifers at Patcham Court Farm, adjacent cottages and the cricket field? Needless to say, the question relates to the Brighton Society’s concerns about Royal Mail’s proposal to build there.

Some years ago Valerie Paynter of Save Hove asked the same sort of question on behalf of Councillor Geoffrey Theobold, who wrote an article for the Argus on the subject following my input.

In order to give you an answer, I have backtracked to see if and how the topic had changed.

Here is my take on things:

Waterhall, Patcham pumping station, and right across to the cricket pitch all sit on the Brighton aquifer.

I quote from the Chalk Management Partnership for Water (ChaMP) report :

Brighton ChaMP was established to protect and improve the quality of groundwater in the Brighton Chalk Block (aquifer) as a valuable natural resource for public water supply. 100% of Brighton & Hove residents’ drinking water comes from this aquifer.

I am unable to find a hydrogeological map showing the extent/boundaries of the chalk block. I can only assume that it covers the floor of Waterhall Valley.

This aquifer is under immense pressure due to factors such as excessive house building increasing demand, lack of storage, lack of quality rainfall and covering the catchment area with impermeable material (concrete etc).

The statement from the ChaMP report implies that Brighton’s pumping stations are all drawing from this source. There is no indication as to how much water is available to be pumped by Patcham at any given time. I can find no current record as to the percentage of water extracted by Patcham pumping station.

The area bounded in blue on the map shows the area covered by flood alerts and warnings for groundwater flooding in Patcham. (Click on map to enlarge) 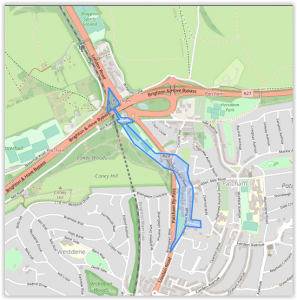 So how is this relevant to your question?

At times of high tides and high groundwater from the surrounding hills, due to higher than average rainfall, water will come to the surface in such quantities as to cause flooding. It often comes from an area just north of Patcham pumping station, roughly where the original pumping station was situated, to the northwest of the railway bridge, flowing across Mill Road and over the green space towards Patcham Place.

From here it flows into the Old London Road; on its way it will be seen bubbling up through the drain covers in the London Road. Any other low-lying areas such as the area surrounding the cricket pitch will also flood.

This higher than usual groundwater level also gives rise to the Northbourne, which flows right through to Pool Valley and out through the beach in many places adjacent.

In times of high tides and lower than usual groundwater, salt water can flow back into aquifers.

The pumping station gets its water from the aquifer through tunnels (adits) cut through the chalk. The reason that Herbert Carden saved the Downs to protect the water catchment area for Brighton is still relevant today.

Whatever we place above the aquifer, or in fact above the chalk adits has the potential to contaminate the water source. I have evidence of this situation being ignored in Mile Oak. Insignificant says the Environment Agency from its desk.

I have included these very interesting facts from Brighton & Hove City Council’s Surface Water Management Plan (2014) and a letter to the Argus dated 22nd August 2013, with which I fully agree. I don’t know Dr Rhodes (yet).

Historically, significant flooding took place in Patcham (as described in Chapter 5.3.4), which was exacerbated by rising groundwater levels.

As no records are available on the volume of groundwater which occurred during historical events, the surface water models which have been constructed do not include for (sic) groundwater flows.

Therefore the models will not replicate the extent of groundwater flooding which occurred during the 2000/2001 flooding event.

The Sussex water supply is under “serious stress”, according to The Argus (August 13th 2013).

How can this be? Ewe Bottom (Horsdean), a basin created by the construction of the A27 Brighton bypass, is situated directly over a major abstraction tunnel leading to Patcham Pumping Station and drawing water from a surrounding aquifer.

Such is its vulnerability to pollution that it is designated as being in an inner source protection zone.

Despite this, the council, in its wisdom, used the land as a traveller transit site.

Both this and the proposed permanent site, planned for the same area, fall under building regulations with respect to sanitation as laid down under local planning policy.

Given the level of stress already imposed on the water supply, is it not odd that a site which could average 120 occupants has a cesspool capacity of, as I understand, 18,000 litres? This is the legal requirement for just two people.

How does our authority reconcile this apparent disparity?

[Editor’s note: the numerous campaigns to mitigate Patcham’s vulnerability to flooding in recent years can be found archived on the Argus and Brighton and Hove News websites. Here is but one example from 2017: https://www.brightonandhovenews.org/2017/06/14/55061/   ]