On 24 March 2020, the Listed Building status of the Madeira Terrace was amended by Historic England from Grade II to Grade II*. 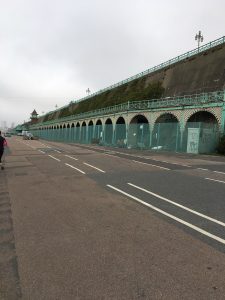 Individuals and organisations who had been in correspondence with Historic England on this question, and those who had contributed to information and advice on the case for upgrading, were promptly informed, and the category and details were immediately amended on the HE website listings pages.

Even allowing for the all-pervasive impact and distraction of the virus crisis, the news of this decision has been met with rather muted publicity and attention, among the media, the heritage sector and the local authority. It was the city council itself that, at long last, in 2019 submitted a nomination of the amendment.

The principal reasons for the enhanced designation are multiple in architectural respects and spectacular in historic terms. The summary in HE’s report refers to the ’bespoke and innovative’ decorative use of iron in a challenging location, and describes the arcade design as ‘dramatic in scale and well-detailed’; the shelter and tower ‘create an arresting centrepiece’;  the assemblage as a whole is ‘comparable to … the Palace Pier’. As part of its historic interest, ‘Madeira Terrace is very rare, being the only known land-based, monumentally-scaled iron promenade in England, and possibly worldwide’. 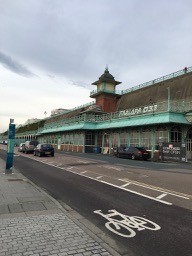 The significance of the amendment should not be underestimated. The distinction between Grade II and II* may well be greater than is widely realised. Grade II accounts for the vast majority of listings; Grade I designation is granted to 2.5% of national listings; and Grade II* to 5.8%. Moreover, promotion from Grade II to II* is a rare occurrence, with considerable justification required. In HE’s terms, the simple headline definitions of the higher gradings are that Grade I items are ‘of exceptional interest’ while Grade II* are ‘of more than special interest’.

In the case of an item of ornamental infrastructure, especially when largely composed of cast iron – albeit incorporating a lift tower, shelter hall and terrace furniture – the award of this higher grading is all the more remarkable. 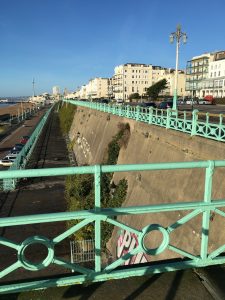 In matters of planning concerning or affecting listed buildings, a dozen or so national organisations are named as statutory consultees – including, for example, the Victorian Society. In practice, local authorities and national consultee bodies, including Historic England, can be expected to pay closer attention and scrutiny to the care and fate of items in the two higher gradings. Tangible benefits of upgrading, at the best of times, are not altogether straightforward or predictable. Protection, rather than prescription, is the fundamental purpose.

Quite apart from the global health emergency, understandably the change in listed status at this time would, in the case of the terrace, be overshadowed by concerns with repairs, practicalities and policies, and by pressures for funding and investment. (Perhaps, one day, the imperative of regular maintenance might also be sufficiently appreciated.)

Nevertheless, preoccupation with those issues ought not to depreciate the principle and value of this decision, in its recognition of the magnificence of this structure and the need for extra protection of its unique and precious enduring character.