The Brighton Society has lodged an objection to the planning application for an 18-storey tower on New England Street on the Longley Industrial Estate. 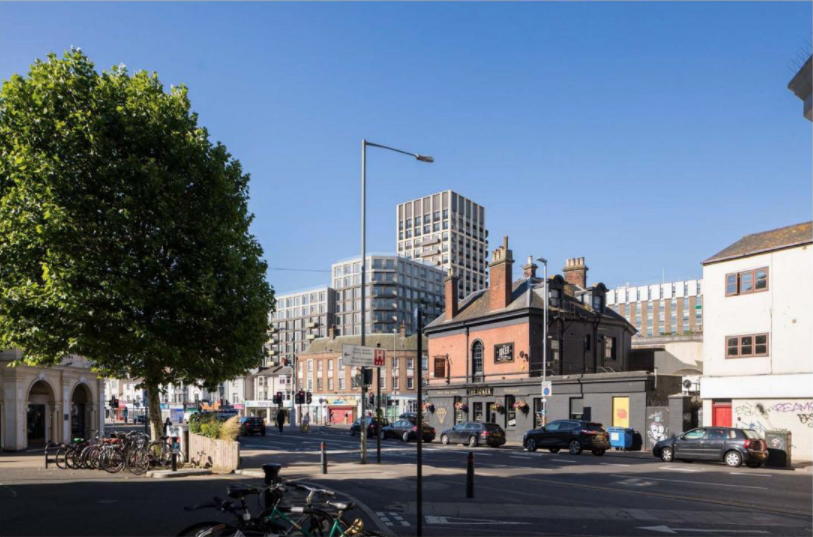 View of 18-storey tower from the north-east

The objection can be found at the end of this article.  This large, bulky new building is one of a group of three tall development proposals, the other two of which are likely to be announced in the coming months.  One is on the Vantage Point site just to the north of the Longley Industrial Estate and the other is expected to be proposed for the site of the Brewer’s paint warehouse on New England Street just opposite the two sites referred to above.

The Longley Industrial Estate proposal is located immediately to the north of New England House between New England Street and Elder Place, and comprises a large, mixed use development of commercial and residential accommodation. It consists of a high, bulky building varying between 11 – 12 storeys over the bulk of the site, with a tower above taking the total height to 18 storeys. A planning application for this has already been lodged – you can view it on the Council’s website – Planning Ref. BH2018/02598 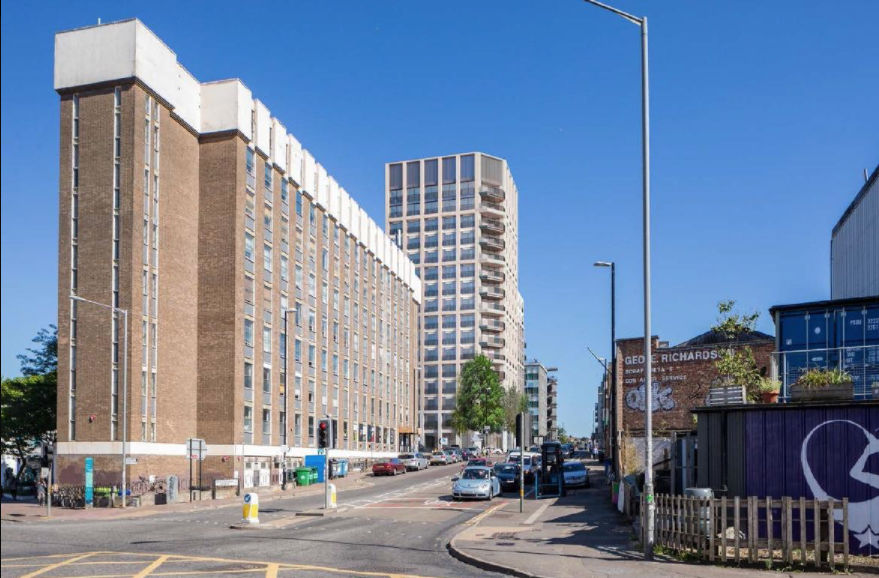 The second high rise development will be on the Vantage Point site at the corner of New England Road and New England Street just to the north of the 18 storey Longley building.

This is likely to consist of three blocks up to 16 storeys high, again for mixed commercial and residential use. Initial proposals have been made public; at the time of writing no planning application has yet been made.

A third tall building development is expected on the Brewers paint warehouse site on New England Street, just opposite the two sites described above, though no details are yet available.

We suspect that the developers of the latter two sites will wait to see whether the 18 storey Longley block is approved by the Council before finalising the heights of their own designs.

Three tall, bulky developments located closely together on land rising above the valley floor along London Road, will have a major effect on the character and appearance of this part of our city. They wlil not only dominate their immediate neighbourhood as viewed from London Road, but their height and bulk will also be prominently visible from many areas of the city located much further away, as well as from the surrounding Conservation Areas and heritage assets. These include views in which St Peter’s Church and the Grade 1 listed St Bartholomews Church also feature.

View from the east. The Grade 1 listed St Bartholomew’s Church appears on the left

They will be quite out of scale and character with these two important large churches as well as the continuum of medium height buildings all along Valley Gardens and London Road, and will consequently have a severely detrimental effect from the visual point of view on this part of Brighton.

Of course there are other functional drawbacks with large developments such as these, which will cause increased traffic congestion and parking problems.

Tall buildings create lots of other problems too. Gradually as more and more begin to appear, the character of the city’s landscape is concealed and dominated by the towers thrusting up above the skylines formed by Brighton’s hills and valleys which define the character of the city and its neighbourhoods. Not only will they conceal our landscape, they will change the essential balance between the landscape forming the backdrop to the built environment to one where tall and bulky buildings dominate it.  Worse still, a conglomeration of tall tower blocks will also have a detrimental effect on the character of nearby Conservation Areas and other historic assets such as listed buildings.

From every point of view tall buildings are bad news. As well as the drawbacks referred to above, social commentators have highlighted loneliness and the lack of any real sense of community which are all too common in tall buildings.

In fact Simon Jenkins in a Guardian article recently described towers as the “enemies of social vitality. They are silent stakes driven through a city’s sense of community”.

There is a myth that the city needs high rise buildings to provide the numbers of dwellings needed to meet the City Plan targets. The truth is they don’t actually add significantly to the City’s housing stock.

For example, if a typical new tower was reduced say from 15 to 10 storeys, the loss to the the city would be on average only about 15 small 2-bed flats.

Even if 20 tower blocks to be built in the city were similarly reduced, that would only amount to 300 flats. That is a drop in the ocean compared with the figure of 13,200 new dwellings required in the city before 2030; 300 flats is less than 2.3% of the total requirement.  And the vast majority of new flats being proposed in the city are only 1 – 2 bedroom.

A far greater number of 3 – 4 bedroom houses – which are urgently required in the city – could be provided by a small increase in the proposed density of 50 dwellings per hectare (dph) set out in the City Plan for housing developments elsewhere in the city, (such as the fringe sites), to 55 – 60dph. This simple measure would provide far more dwellings for the city than a relatively small number of small expensive flats on the upper floors of 20 or more tall buildings.

Tall buildings don’t make sense. The benefits to the city are not worth the drawbacks.

1. Too prominently visible from all over the city
We are concerned that this building will appear to be very prominent from several viewpoints from many areas of the city, where the tall and bulky tower block intrudes obtrusively above the horizons defined by the surrounding hills and the tops of existing buildings surrounding the site.

The problem in this case is not that one tower block will affect views from just a few viewpoints, but that it will be very prominently visible from several locations all over the city and surrounding Conservation Areas and Heritage assets, including views in which the Grade 1 listed St Bartholomews Church will also feature.

2. Obtrusively overbearing
We are also concerned that approval of an 18-storey building in this location will act as a precedent and open the door to a flood of applications for similarly obtrusive towers. This would then begin to have a severely detrimental effect on the character of the city, its landscape setting and its urban scale.

3. Is the harm caused by the tower worth only 19 flats?
We would point out that the six-storey tower – which is the primary reason for our objection, only houses 19 units out of a total of 208 units, (10 of which are 1-bedroom flats). We would suggest that in applying para 14 of the NPPF to this application, that the adverse impacts of the tower in terms of its detrimental effect on views, existing Heritage assets and the surrounding Conservation Areas, would “demonstrably outweigh any benefits” created by only 19 residential units (out of a total of 208), which are being accommodated within the obtrusive six storey tower.

The adverse impacts should be NOT be balanced against any perceived public benefit of the whole development.

4. Relationship to surrounding Conservation Areas
The site itself, although not itself in a Conservation Area, is surrounded by Conservation areas – West Hill CA, North Laine CA, Valley Gardens CA, Round Hill CA, Preston Village CA, Preston Park CA and it will be visible from Queen’s Park CA further to the east.A study of the views included within the Heritage, Townscape and Visual Aspect Assessment illustrates that the building will be very prominent from the following locations:

But there are virtually no views shown from viewpoints on higher and more distant parts of the city and the South Downs. There should be.

Conclusion
In conclusion, we consider that tall, bulky developments such as this one will soon – when replicated by similar proposals – eg the neighbouring Vantage Point – irrevocably change the essential and unique character of this city, its landscape and seascapes, its townscape and historic patterns of low-rise development, into just yet another characterless urban conglomeration.

Time to say No.