Lanes – the more the merrier 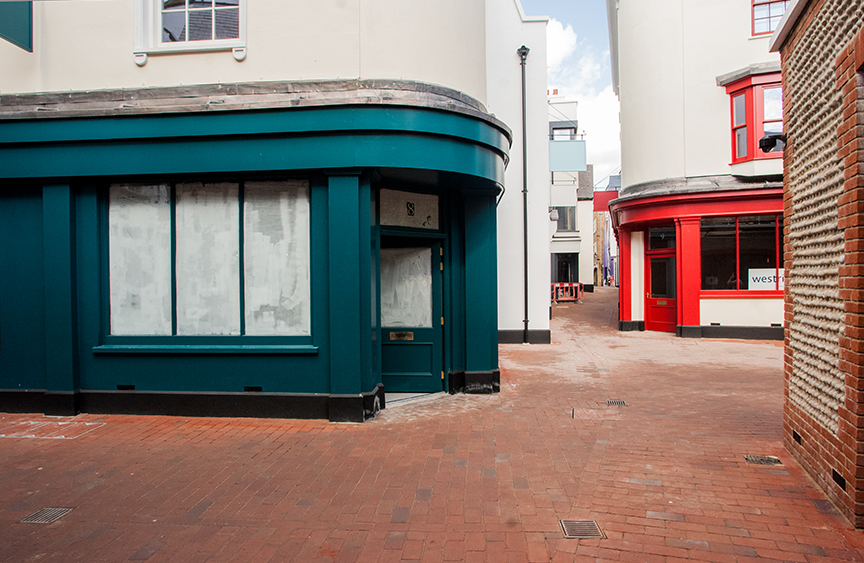 The brand new Hannington Lane precinct has been hailed by local media as a triumphant success. As the development is gradually unveiled, and before its buildings are occupied and its lanes furnished and pavements crowded, a wander through the pedestrianised scheme at this early stage can provide a clear and calm encounter with it.

But first, for anyone looking for its location by searching its name, a warning: the spelling seems to be more a matter of choice than fact.

A physical sign in North Street, in large lettering spaced vertically down a newly curved corner, flourishes the title Hanningtons Lane. The Post Office’s post code website lists it as Hannington’s Lane, a version adopted also by the city’s tourist service Visit Brighton, while the practice of the developer, architect, constructor and estate agent, along with the Argus and the Brighton & Hove Independent newspapers, is to favour an s-less Hannington Lane. On the city council’s website, the Hannington’s and Hannington forms both make appearances.

The architects meanwhile envision a Puget’s Lane designation for one of the pathways.

A more literally fitting name for the general development might have been the Lanes Lane, since the styling of it owes so much to the Old Town area’s Lanes and so little to the external character and detail of the actual former Hannington’s buildings. Meanwhile the loss of the little and oldest North Street shop, to make way for one of the paths, will still sadden its admirers.

The scheme complements the old Lanes, consolidating their setting without copying them slavishly or overpowering them with too forceful a presence. Viewed as a whole, their clear distinction from the Lanes is balanced by the convivial manner of their fitting into them. This stratagem extends to the entrances.

At North Street the entrance is subtly inviting, with the low, classical window in the cottage, the slightly crooked path line, the steps and the visibility of the upper level ahead. By contrast the entrance from Market Street is broader and more open, unfolding to the left of the beautiful Hannington’s elevation, a welcoming approach through the broad floor, the variegated terrace and the cobbled and quoined elevation of the backdrop. As one enters, the leftward zigzag formation of the south path unfolds.

From Meeting House Lane, in comparison, the opening tends perhaps to feel lopsided by the diffuse site retained to the right, and, before some fanciful terrace frontages beckon into the lane ahead, the arresting scale of the white weatherboard-style gable. The addition of the short, narrow cut-through from Brighton Square promises to be an intriguing feature. 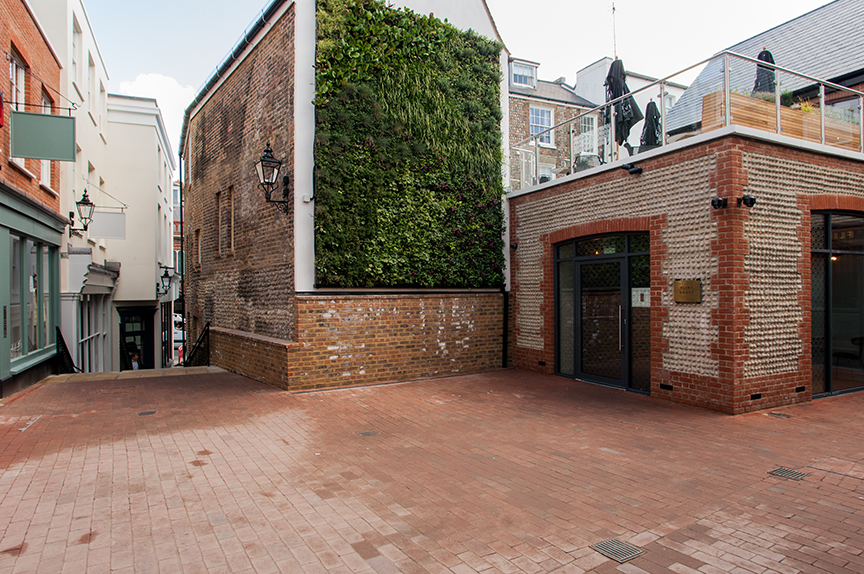 There is room in the passages allowing views upwards, above and between the new roofs to the surrounding rooftops and roofscapes, demonstrating sensitivity to the urban location and visual context of the site. As well as preserving certain views beyond, of course the development reveals, at the heart of the plan, the venerable Puget’s Cottage wall, viewed generously from the spacious pavement. The greenery on the south wall of the cottage is at present the only vegetation in the development, and its appeal may meet with a mixed response, not to say mixed fortunes.

In the planning of the scheme, the decision was taken to aim for a continuation of details in the character of the existing Lanes. Contours and styling from the eighteenth and nineteenth centuries dominate, and in many of the buildings traditional and local materials have been applied or emulated. There are direct references to specific features and details of the Lanes, for example where parts of one frontage echo elements of the Bath Arms. 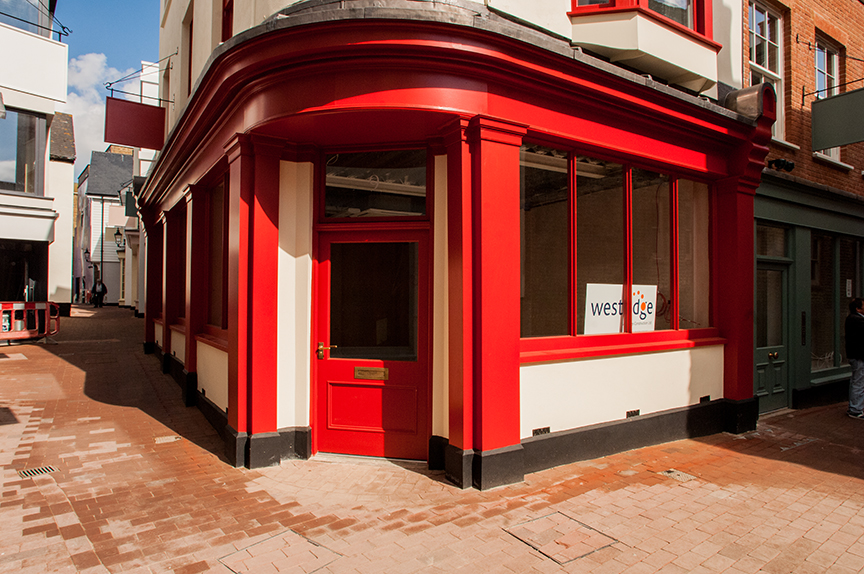 In many respects the composition bears a remarkable resemblance to the forty-year-old Duke’s Lane: hung tiles, brick with cobble, set-back fenestration, sizeable dormers and historically styled shopfronts. There are differences, not only in volume and scope. In Hannington Lane, the curve of the corners of more than one building has a graceful quality not often seen in the city’s recent architecture.

The theme of red paving throughout is important in harmonising with the Lanes’ traditional Sussex brick paving. The lamps work well; arguably, the railings a little less so – those at the steps standing out starkly, one or two at upper window level somewhat obtrusive or over-elaborate. 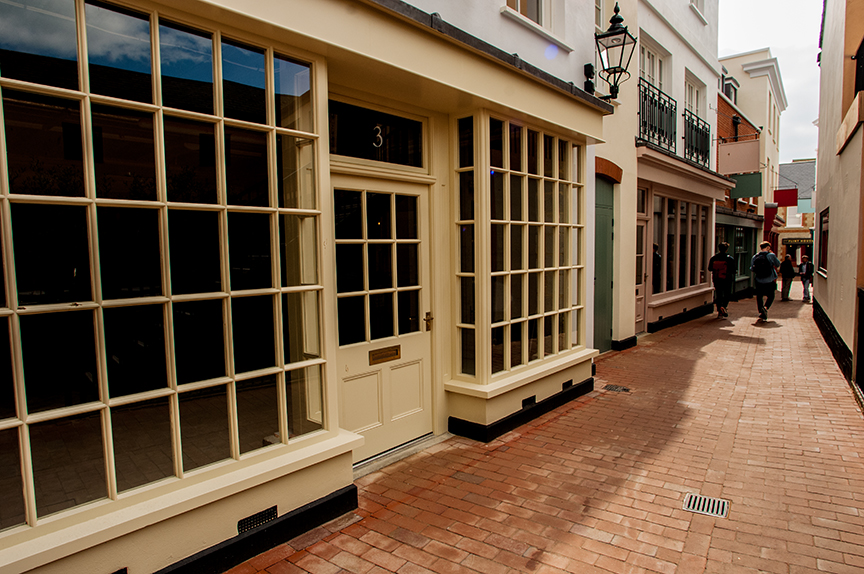 If there are shortcomings in details of design work, we might point to some heavy-handed lead, shaping of fascia bookends, absence of cill-ends and so on – but these may be matters of minority interest. A welcome gesture is the installation of brackets for overhanging retail signs.

There will inevitably be frank dismissal and disdain from some quarters, that this is all a fake, a backward-looking exercise in nostalgia, pastiche or even kitsch – but that would be to undervalue the elegance, variety and amenity of the scheme’s individual buildings and its cohesion and comfort in such a compact site. In an ideal world, a delightful and thriving, forward-looking gem might arise here. But beautiful, enduring contemporary designs for opportunities of this kind are rare and usually costly. 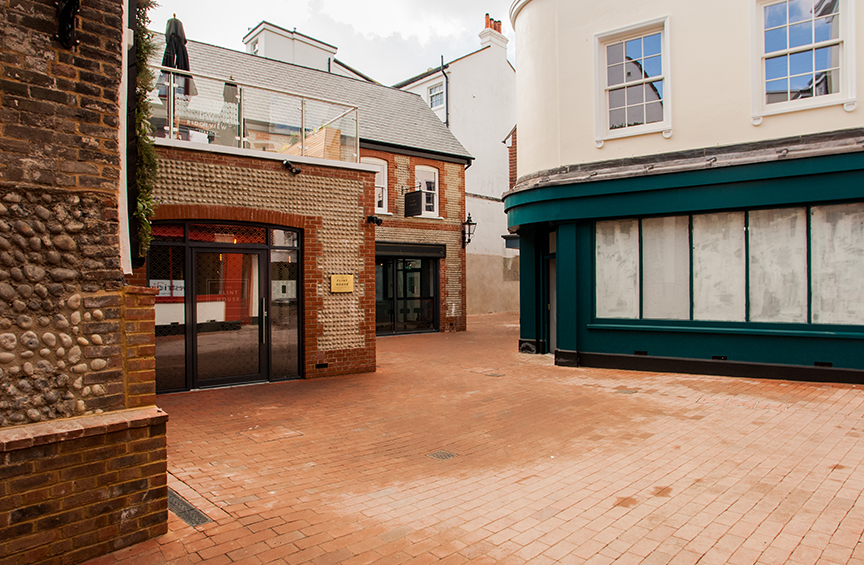 When most of the major developments currently planned for the city are plain, harsh and monolithic, a scheme celebrating architecture and street form of a kind that attracts and holds people to Brighton, is surely worthwhile. The architects have succeeded in producing a colourful and evidently popular walkway.

One effect of the experience of walking through such a merry piece of townscape, is to find how forlorn and gritty a condition the adjoining Meeting House Lane is now in, and we hope that the new development might act as a boost to its neighbours by encouraging some cleaning and renovation of their more tired stretches.

Meanwhile the development is at the earliest stage of usage and presents an understated framework for future additions and embellishments: street furniture, signs and lettering, culminating in the vitality and social ambience of cafes, shops and services. Retail premises may be closing down at an alarming rate, but this should not be the moment to dampen enthusiasm and play down investment for this scheme. The high street crisis will not be averted by precluding an extra cluster of cheerful and theatrical shopping vistas in a tourist hub and conservation area.

We look forward to following developments in the scheme. Future articles will report and comment on the area as its character materialises.