Just before Christmas the footpath in Preston Park Avenue (a very long road) was dug up by the council and all the paving slabs discarded and replaced by black tarmac. When we asked the Chair of Environment, Amy Heley, why this had occurred she forwarded an explanation from the council that basically said that their Highways Inspector had condemned the footpath and to “achieve our defect intervention repair timeframe” they arranged to dig up and discard the paving slabs. 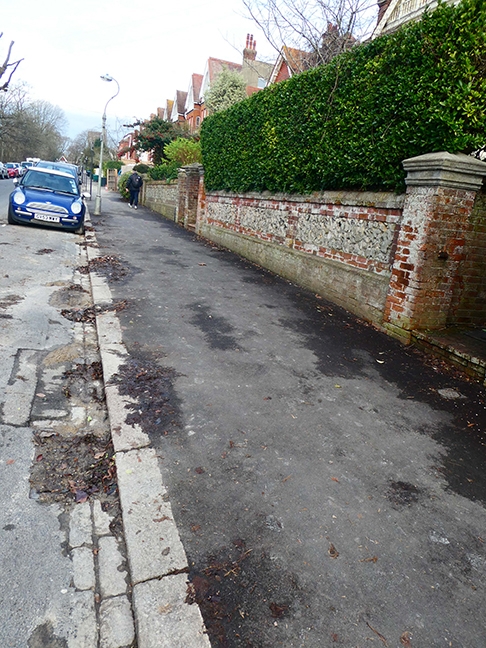 And what was so terrible about the footpath? The two photos taken are just before the contract began. They show various length of the footpath. Is this footpath in such a state that the slabs cannot be repaired? Is there no contracting firm left that cannot repair footpath slabs – so the only solution is to dig them up?

One major problem with this decision to dig up the footpath is the discrepancy between how householders must behave within a conservation area and how the council behaves. This road has planning controls that include Article 4 Directives which means that the owners of the houses have to get planning permission for any alteration on the front elevation. So even minor changes for such items as window frames must go through the full planning process. But the council’s Highways Department seems to behave as though restrictions do not apply to them. 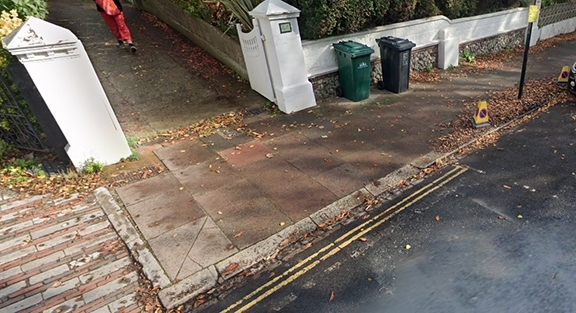 The cost of the contract must have been substantial. Presumably in the region of £50,000 at a time when the council’s finances must be precarious. And did anyone consider the waste in terms of Green Issues – after all we do have the Green Party in charge of the council. Issues of embodied energy are very applicable to this contract. Concrete production produces a high level of carbon dioxide. It is considered that to produce a paving slab results in 0.127 kg of carbon dioxide for every kg of concrete. The construction of paving slabs for Preston Park Avenue would cause around 4000 kg of carbon dioxide. Carbon dioxide emissions for tarmac are even higher. And if a future council decided to relay the footpath it would cost around £90,000. So, if you already have the paving stones it is an absolute tragic waste to dig them up and dump them in land fill.

For many years we have tried to ensure that when utility companies damaged paving or where areas of paving had become damaged the footpath was always repaired with new paving. Now we seem to have an individual in highways who regards maintaining paving as an anathema. Where does this stop? Digging up the paving surrounding the Pavilion?