At full Council on April 19th, a petition, three Public Questions, a Conservative Notice of Motion and powerful speeches from Green and Conservative councillors all failed to impact the current administration’s intent to rip out further radial shelving on the ground floor of the Library to create a sectioned-off staff workspace. In fact, it turned out that the Council had already granted itself Listed Building Consent for these destructive works.  Can the Council legally grant itself Listed Building Consent or do applications relating to Council-owned buildings have to be submitted to Historic England for decision?  The Council’s Legal Advisor needs to confirm just what the legal position is.

Cart before the horse

The fated shelves have since been cleared of books and boarded up. The Library is to be closed entirely for a week in June and again in July for ‘essential maintenance’, i.e. the execution of the works. Curiously, though, the first closure begins on June 4th, two days before the Planning Committee meeting which will determine  Applications 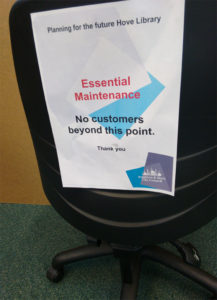 There have been a large number of Objections to the Nursery.   Library users and nearby residents are particularly concerned about noise levels in the garden which, being a narrow, high-walled space, would act as an echo chamber for cheerfully loud tinies. And so, in response to these concerns, the Nursery has designated the area as a ‘Learning Garden’, to be accessed only by small groups of children under supervision.  Where, then, will they be able to let off steam, particularly in warmer weather?

Unacceptable behaviour by the Council

The way the Council has dealt with proposals for Hove Library has been appalling.  First it imposed a totally unreasonable deadline for closing objections to the proposal to convert a large part of the ground floor book stack area to offices, claiming it didn’t have to go to Planning Committee because there were less than five objections received by the artificially imposed deadline;

Thirdly it failed to consult the joint party committee of councillors set up to look at the future of the Library about any of these applications.

We think it quite possible that it has acted ‘ultra vires’ in making these decisions.

Time for a big re-think.  Write to your local councillors.

Dates for your diary

Public Meeting: Thursday May 31st, 6pm to 7.30pm at Hove Library. Councillors, officers and representatives from Hove Village Nursery as well as Café Domenica, a prospective lessee of part of the ground floor of the Library, will attend with updates on their plans and to respond to questions.