From the Marina in the east to King Alfred in the west, our historic seafront is under threat.  Major high-rise massive developments are either being proposed like that at the Marina, or are in the pipeline.  The four key sites are:  The Marina, Black Rock, The Brighton Centre/Churchill Square and King Alfred.

At the Marina a total of 1000 new flats are proposed in nine tall and bulky buildings ranging from 8 to 28 storeys, as well as over 1,500 sq.m of commercial floor space.

It is a massively obtrusive development which will block views of the coastline from both east and west, and by its sheer size and bulk will dominate the landscape and the chalk cliffs behind, and block views of the sea.   It will be completely out of scale and character with the Grade 1 Listed Kemp Town Estate just to the west, upon which it will have a severely detrimental effect.  You can read our objection to the proposals here: https://www.brighton-society.org.uk/brighton-society-objection-to-the-marina-development/

If the Marina developments are approved, it will inevitably set a precedent which will be followed by more massive buildings at Black Rock, just to the west of the Marina, between it and the Grade 1 Listed Kemp Town Estate on the cliff top above. The Council intends to replace the Brighton Centre which is to be sold in order to pay for a new Conference Centre at  Black Rock. This would be larger than the current Brighton Centre and be able to cater for events of up to 10,000 people.

One concern is that commercial considerations and potential financial shortfalls will inevitably lead to pressures to include as many commercial and residential uses as possible in addition to the conference centre, in order to pay for it all. There are no design proposals yet, but more massive buildings in this sensitive location together with those at the Marina, would irreparably compromise the quality of our historic seafront at its eastern end.

Moving further west towards the centre of the seafront we then come to the site of the Brighton Centre.  This, together with development of the Black Rock site, is called “The Waterfront Project”.

It is proposed to demolish the Brighton Centre and extend The Churchill Square retail area up to the seafront. This development, which would include commercial uses and new housing, would occupy the sites of the current Brighton Centre and probably the Kingswest buildings including the Odeon Cinema complex adjacent, both of which are owned by the Council.

Besides the new commercial areas, it was estimated in December 2014 that up to 450 new homes, 25% of which would be ‘affordable’, could be incorporated into both the Churchill Square and Black Rock developments.

We suspect that this new housing would be accommodated in tall towers rising above the commercial buildings.  For example the proposed Anston House scheme next to Preston Park, will provide 229 new flats in three tower blocks of 15, 14 and 13 storeys.  That’s about half the figure of 450 homes mentioned above.   So conceivably there could be three towers at Black Rock and three more at Churchill Square.

And of course, like Black Rock, the Brighton Centre site conveniently avoids being included in either of the Conservation Areas on each side of the site.  And, by a strange coincidence, both these sites also happen to be owned by the Council.

In addition to concerns about the visual effect that buildings of this size and scale will have on the character of our historic seafront, there are also major concerns about the effect of an increased concentration of retail uses on other more disadvantaged retail areas in the city such as Western Road, London Road and other shopping streets in the centre of the city.

And then there is the question of how over 10,000 people will be able to get to and from the events to be held at the new Black Rock facility and the railway station and the centrally located hotels, restaurants and shopping areas.  An HS2 version of the Volks railway maybe?  Dream on.

Then further west we come to the King Alfred site.  Although the Crest Nicholson proposals are now dead in the water, 560 flats were proposed in four tall buildings right on the seafront, the highest of which is proposed to be 18 storeys, in addition to a new sports and leisure centre.   There is now a question mark hanging over the  financial viability of the whole proposal.

Will this mean that the amount of new housing will be increased even further if any future developer is to make a return he finds acceptable? This would result in even larger and taller buildings than the previous proposal.

Effect on our seafront

The likely massive scale and dominating effect of these four huge developments will have a vastly detrimental effect on the relatively consistent scale, character and quality of our historic seafront buildings. Notably none of the four sites  are included within the otherwise continuous stretch of Conservation Areas along the seafront. It is also no coincidence that three of the four sites most likely to threaten the scale and consistency of our historic seafront are owned by the Council. 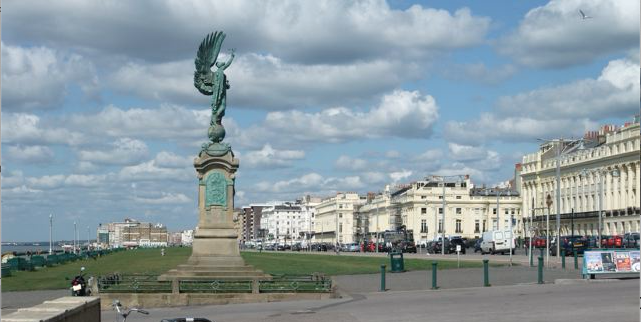 An eminent planner back in the 1960s once said: “the role of the planner is to avoid the significance of irreversible mistakes.”  We suggest that the Council Planners have forgotten, ignored or more probably are not even aware of this advice.

In spite of owning three of the four sites discussed in this article, it looks as though it is blindly walking towards  ignoring that duty.