Has the Council surreptitiously and deliberately ditched Planning policy to bolster developer interests?

It would appear so. The Brighton Gasworks site is now considered as having “potential” for tall buildings. But it wasn’t until last October – when the draft Urban Design Framework SPD was issued for public consultation.  Policy had changed.  Why?

The Gasworks site is on the high ground above the Marina. In 2004 the Council approved the Tall Buildings Study which defined areas of the city which were considered to be suitable for tall buildings.

The Marina was one of those areas. This is what it said:

Extract from SPG15 – Tall Buildings Study 2004
8.3 Marina
8.3.1 The Marina, mainly because of the topography and the existence of a district shopping centre in the complex, has potential as a node for tall buildings. The marina has a number of special characteristics in terms of tall building opportunity. The cliffs to the north of the area are able to mitigate, up to a certain height, the visual impact of tall development on surrounding areas. Its seafront location would increase the amenity for residents and occupiers of any tall building by providing links to extensive open spaces. The existence of a district shopping centre within the marina, and the opportunity to ‘bookend’ the edge of the city, contribute to the tall building opportunity within this area.
8.3.2 The Marina is a node with particular sensitivities of building due to the relative proximity to Kemp Town and housing on the adjacent hillside which provide challenges for designers. Tall buildings in this node will need to have regard to their visual impact on the residential areas to the north of the cliffs and their overall composition when viewed along the coast. Proposals for this area should seek to resolve transport issues, as this node has the least developed transport services and infrastructure of all the areas.

The Gasworks site was not mentioned. There were no maps defining the node but it was generally understood to apply to the areas at the base of the cliffs behind the Marina.

This interpretation lasted through to the formalisation of the City Plan Part 1 in 2016.
This shows the gasworks site included in Development Area 2 (DA2).
But nowhere does it mention it falls within a Tall Buildings area.

Below is the map showing the development area boundary. Area 2 is the Gasworks site. 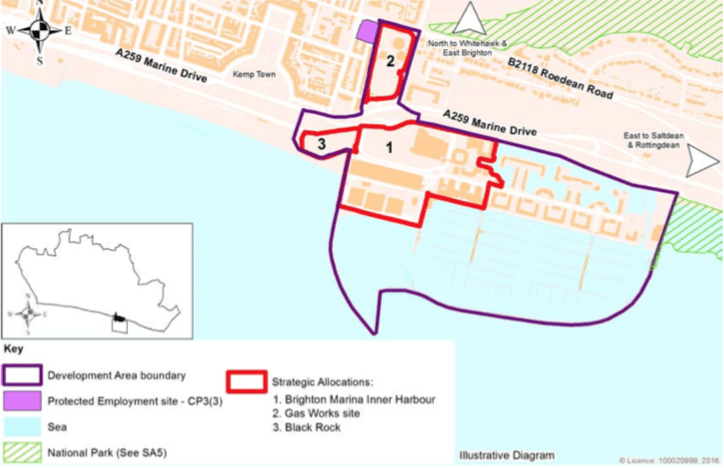 It goes on to discuss the Gasworks site:
The Gas Works site has been identified for approximately 2,000 sq m of business floor space to the north of the site, a minimum of 85 residential units and some ancillary retail development. The key criteria against which proposals will be assessed are:
1.     a)  Employment provision – development should provide an appropriate mix of employment floor space of varying sizes that cater for business uses ranging from office to light industrial, including small starter units or managed units (Use Classes B1);
2.     b)  Housing mix – development should provide for a mix of dwelling type, tenure and size to cater for a range of housing requirements and to improve housing choice;
3.     c)  Design – development proposals should demonstrate high quality design which positively contribute to the varying character of existing residential and commercial properties in the vicinity to create a cohesive and attractive urban environment;
4.     d)  Connectivity – development proposals should enhance existing links between the Marina, Gas Works and Black Rock and contribute to the creation of safe links and coherent integration between the Gas Works site and the surrounding neighbourhood;
5.      e)  Land contamination – development proposals should undertake and submit to the Local Planning Authority evidence to support uses where possible land contamination and remediation may prohibit the delivery of the above uses and amounts;
f) The developer will enter into a training place agreement to secure training for local people.

No mention of Tall Buildings. With only 85 new dwellings allocated, why would it?

Brighton Marina – is a node (place where activity and routes are concentrated) limited to the boundaries formed by the eastern and western breakwaters and the undercliff walk to the north.

That’s pretty clear. The Marina Area was limited to the lower area at the foot of the cliffs. And by extension, so was the Tall Buildings Area. That was in July 2018.

Things had changed. It included the map shown below. 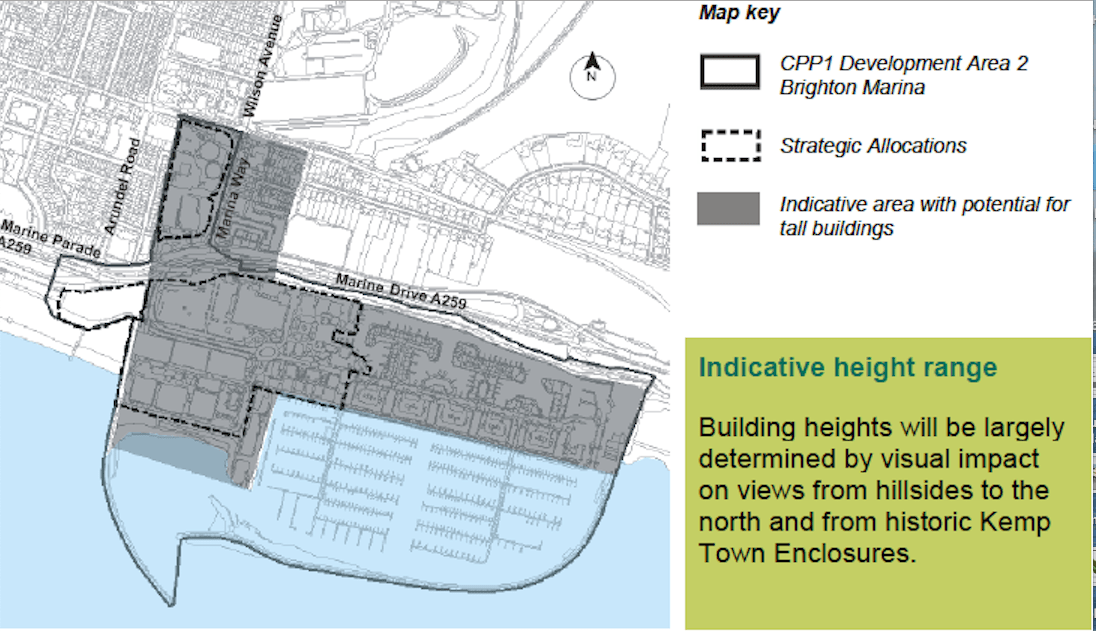 The Gasworks site was now included in a shaded area entitled “Indicative area with potential for tall buildings”.

But it also said: “Building heights will be largely determined by visual impact on views from the hillsides to the north and and from historic Kemp Town Enclosures”.

You would have thought that any rational interpretation of that policy statement would severely restrict building heights on the Gasworks site. It is after all on the clifftop above the Marina in a very prominent and visible position.

It is also close to the Grade 1 Listed Kemp Town Estate including Arundel Terrace, Lewes Crescent and Chichester Terrace and other listed buildings such as the Grade II French Convalescent Home and the Grade II Temple at Black Rock.

The locally listed Marine Gate is immediately to the east of the Gasworks.

Attached to the bottom of the map is this:

The first statement reinforces the points made above about the adjacent heritage assets, the relationships with the residential areas to the north of the cliffs (ie around the Gasworks site), and the visual effect of development proposals when viewed along the coast.

Would tall buildings be appropriate for the Gasworks site given the restraints implied by those considerations? We think not.

So what has changed between July 2018 and now?
Why has the Gasworks site now suddenly become an area with the “potential for tall buildings”?

The most significant change has been the Berkeley Group’s entry on to the scene in June 2020 when it published a proposal for a conglomeration of massive buildings up to 15 storeys and up to 700 new dwelling units.

But the Council Planning Dept must have known and had discussions with the Berkeley Group long before then.

Could there be a connection between these two events?  Who can tell?  The question needs to be asked.  We’ll leave you to make your own judgement.

But if there is a connection – that could be interpreted to mean that Council planning policy in relation to Tall Building areas has been deliberately and surreptitiously changed to the direct advantage of the developer, the Berkeley Group. And previous planning policies ditched in order to achieve that.

So much for the Council’s fine words about transparency and the value of community involvement in the planning process.

The Council’s Head of Planning stated recently that the Gasworks site is within an area which Council policy states is suitable for Tall Buildings.

Really? – in spite of the constraints referred to above?

In terms of legally constituted Council policy, her statement is incorrect anyway because the Urban Design Framework SPD has not yet been approved by the Council. It’s still a draft.

And her interpretation of her own planning policy document is biased in favour of a massively inappropriate development proposal.

We think the residents of Brighton & Hove deserve an explanation for what is going on here.