You are at:Home»Graffiti»Graffiti and the long grass – What’s the point of a Police Commissioner? Particularly if she doesn’t reply to your letters. 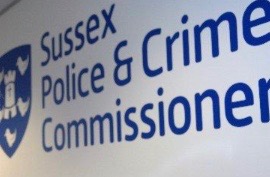 We wrote to Katy Bourne, the Police and Crime Commissioner for Sussex on 20 January, requesting an explanation for the Police’s decision not to prosecute a graffiti vandal who had been caught daubing his tag at least 80 times across Brighton City Centre.

The full text of our letter and all subsequent correspondence is shown in full below under the heading of Correspondence trail.

We sent a copy of our letter to Caroline Lucas who replied very promptly expressing her support.

But nothing came back from Katy Bourne.

On 27 February we wrote again to Katy Bourne with a reminder, enclosing our original letter. We sent a copy to Caroline Lucas to keep her in the picture.

On 3 March we received a letter from Katy Bourne’s office, saying that it had made enquiries with Sussex Police about our queries, and would respond to us in full to address our concerns in more detail.

Since then there has been nothing more from her. Over two months now.

On 18 March she wrote again enclosing the response she had received from the Council.

This didn’t make any comment directly about our concerns saying merely that since the (prosecution) case, the Council had, “built a better and stronger working relationship with Sussex Police, who liaise directly with our Environmental Enforcement Manager on evidence relating to tagging. Sussex Police now have a dedicated graffiti Police Officer who is being very supportive in delivering our Graffiti Reduction Strategy. We are looking to arrange joint patrols and  joint communications with Sussex Police to raise awareness of the seriousness of the offence and to increase the presence of officers within the hot spot areas.”

“Looking to”. That’s really encouraging. But no reference to our concerns about inadequate penalties for taggers caught in the act.

And that’s where it stands. Hence the reference to long grass in the title of this post.

The contrast between Caroline Lucas’s positive and supportive responses and the almost total lack of response and interest from Katy Bourne is striking.

“A man has admitted daubing his graffiti tag more than 80 times across Brighton City centre. The 22-year-old was arrested after a sharp-eyed CCTV operator spotted him spray his tag LABR across various shop buildings in North Street in the early hours on 3rd April 2019. Detectives and preventive officers worked with the Brighton and Hove Business Crime Reduction Partnership and the Brighton and Hove graffiti team to investigate. Detective Sergeant Jardine said “The tag in question – the letters LABR – was prevalent across Brighton city centre. With the help of our partners, we identified 81 individual tags and numerous separate crimes recorded. The suspect, who had been released under investigation was re-arrested, his home searched, and additional evidence seized. Once confronted with the evidence, including a spreadsheet of tags across the city, he admitted responsibility for all the tags.”. Sussex Police stated, “The man, who was not known to police, accepted a conditional caution, which included doing a day of unpaid work for the city council as part of a community payback scheme.”

The Brighton and Hove News illustrated the article with an image of the tag used to obliterate the Council’s information boards that had been erected around St Peter’s Church to provide information on the Valley Gardens Scheme. The tag had been repeated on all the boards soon after their erection. The tag has never been removed as presumably the task is too difficult. So, the tagging at this one site has destroyed the whole purpose of erecting the boards. They are very large high-quality information boards so the criminal damage at this one site must be well in excess of £5000.
The cost of the criminal damage caused by this tagger is significant in that an article on graffiti in The Argus on November 9th included statements from a spokesman from the council spelling out their attitude to taggers and the need for prosecution.

“Taggers are becoming more brazen in their attitude. If the value of criminal damage exceeds £5000, the maximum penalty is three months imprisonment, or a £2500 fine. The council are working with the police to push for harsher penalties and potentially prison sentences. The council provides the police with reports of previous similar tags to ensure the appropriate prosecution takes place, as the more damage the tagger has caused, the more the fine or longer the jail sentence.”

The Brighton Society has had several meetings with the council to discuss graffiti over the last year and we fully support the policy of prosecuting serial taggers. If any sentence includes community payback then it should be realistic in terms of removing the graffiti.

The ultra-lenient treatment of the 22-year-old serial tagger by Sussex Police is a matter for concern. The evidence of his activities was extensive so we are very dismayed that a person who must have caused well over £5000 of criminal damage is just cautioned and told to work for the council for a day – an irrelevance in terms of any realistic deterrence. This tagger caused criminal damage at 81 sites – if he had been put to work to clean up these sites, he would have had to work for months not just one day.

The decision not to prosecute needs some explanation.
We have the following questions that we think need to be answered.
(1) What is the policy of Sussex Police for serial taggers operating in Brighton?
(2) Has this policy been agreed with Brighton and Hove Council?
(3) How does this policy deter taggers in the future – with particular reference to case discussed above?
(4) With reference to the 22-year-old tagger caught in April, at what level in the Police Authority was the decision made not to prosecute this individual?
We would request your detailed response to these questions and concerns.

21 January from Caroline Lucas to Brighton Society
Thank you for sending me a copy of the letter that the Brighton Society has sent to the Sussex Police and Crime Commissioner, Katy Bourne.

I certainly share your frustration about the extent of tagging in central Brighton, which unlike some other forms of graffiti, far from adding anything positive to the overall visual impression of the city, significantly damages and undermines the city landscape.  I’d be interested to see the response you receive from the PCC, so please do let me know when you have this.

I’d also be very happy to highlight your letter to Brighton and Hove City Council, and to ask for an update on their graffiti strategy. Whilst it is difficult to comment on this particular case, especially without knowing more about the individual circumstances to understand exactly how the decision-making was balanced, tagging can cause significant damage, and I’d like to be clear about the joint approach adopted in the city, and any planned review of options that could be considered to improve the situation locally.

Please do let me know if you would be happy for me to share your letter with the officers leading on this issue at BHCC.

27 February Brighton Society to Sussex Police Crime Commissioner
We wrote to you on January 20th expressing our concerns about the way the Police are dealing with (or rather are not dealing with), the problem of graffiti in Brighton & Hove.
A copy of our letter is enclosed for your convenience.
Now almost five weeks later, we have received neither acknowledgement of our letter nor any response to our concerns.
Frankly this is not acceptable and unless we hear from you in the near future we will have to consider taking your apparent lack of interest into the public domain.

27 February Brighton Society letter to Caroline Lucas
Thank you for your prompt reply to our email attaching for your information our letter of concern dated 20 January to Katy Bourne, the Sussex Police and Crime Commissioner.

Regrettably we have had no response or acknowledgement, so I have sent a reminder letter which I attach.

We are encouraged by your expressions of support, and if and when we receive anything from the Police Commissioner we will keep you informed of that.

We are grateful of your offer to approach the City Council;  we have had several meetings and correspondence with both councillors and Cityclean, and have commented on the Council’s graffiti strategy.  In our view Council policy towards the problem is far too little, far too late and frankly half-hearted, but we will bear your offer very much in mind as we continue our campaign on our website and elsewhere against the graffiti problems afflicting the city.

Thank you for getting back to Caroline on this, and apologies for the delay acknowledging your email. I’m just letting you know that Caroline has now raised the matter with BHCC, and we will let you know when she receives a response.

Many thanks for your email.  We very much appreciate Caroline’s support.  We have recently received a response of sorts from the Police Commissioner’s Office which I attach for your information, though our questions are so far left unanswered.

It will be interesting to see what BHCC say in their response to Caroline’s query.

We are keeping a log of the correspondence on this issue, which will act as the basis for an article on our website in due course, in which credit for support (or otherwise), of our respondents will be duly acknowledged – and criticised if necessary.  In your case we are most grateful for your interest and support.

18 March letter from Caroline Lucas’s office to Brighton Society
Caroline received the response copied below from Brighton and Hove City Council earlier today, so I’m getting in touch to forward details.

At the moment Caroline is receiving a very high amount of urgent case work, so responses may take slightly longer than usual. However, please do feel free to keep Caroline update on your work lobbying for action in this area, as she is very aware of the issue of problem tagging in the city, and is keen for there to be appropriate strategies in place. In the meantime, I imagine that you may well already be linked in with the councillors on the Environment Transport and Sustainability Committee at BHCC, but it might be beneficial to make clear any key concerns you have on this too.

Many thanks for forwarding the letter. I’ve flagged your update to Caroline to make her aware, and we will let you know when she hears further from BHCC.

Letter from Lynsay Cook (BHCC) to Caroline Lucas dated 18 March
Following this case, we have built a better and stronger working relationship with Sussex Police, who liaise directly with our Environmental Enforcement Manager on evidence relating to tagging. Sussex Police now have a dedicated graffiti Police Officer who is being very supportive in delivering our Graffiti Reduction Strategy. We are looking to arrange joint patrols and  joint communications with Sussex Police to raise awareness of the seriousness of the offence and to increase the presence of officers within the hot spot areas.

We have taken a couple of Strategy update reports to the Environment, Transport & Sustainability Committee recently:

We were also looking to introduce new measures to tackle graffiti on private property. However, last nights Committee was postponed. You can read the proposals here:  http://present.brighton-hove.gov.uk/ieListDocuments.aspx?CId=823&MId=9510