Since we set up the coalition of amenity and community groups in February, to oppose Berkeley/St William’s development proposals for the Gasworks site in East Brighton, the coalition has increased from the seven original members to sixteen, with two more groups engaged in discussions about joining the coalition.

Regular weekly meetings are held to which representatives of all groups are invited, to review progress, exchange information and agree on ways of promoting our campaign.

Here are some of the main issues the coalition has discussed and acted upon. Some of them are covered in more detail elsewhere on the Brighton Society website – the summary below includes updates on some of those articles.

We discovered that a provision was being introduced in the draft Urban Design Framework (UDF) – a subsidiary document – that would, if approved, permit tall buildings on the Gasworks site.

We asked the Council Legal Advisor whether the UDF could over-ride the City Plan.

Her reply confirmed that the Council’s proposal to extend the tall buildings zone on to the Gasworks site was unlawful and would be removed from the draft UDF. That was good news.

But it raises two further questions: why did the Council even consider introducing an unlawful measure into its draft planning policy document?

And why did it decide to do it in the middle of last year when the draft UDF document was published?

The answers may be related to the advent of the Berkeley Group sometime in 2019 with a proposal to develop the contaminated Gasworks site. Did Berkeley insist on developing the site with a conglomeration of tall buildings in return for a change in Council planning policy?

We don’t know. But we thought we should find out, so we sent the Council a Freedom of Information (FOI) request.

FOI request
The first request was sent on February 8 and asked to see copies of all correspondence on planning matters between the Berkeley/St William Group and the Council after January 2019.

So we lodged a complaint wth the ICO (Information Commissioner’s Office).

On 7 May the ICO wrote to the Council instructing it to respond to our request within 10 working days – ie by 21 May. But we heard nothing from the Council. On 25 May we wrote to the Council requesting a response by 2 June otherwise we would have no option but to lodge a second complaint with the ICO. Again we received no response. So on 4 June we complained to the Information Commissioner for a second time.

On 9 June the ICO issued a Decision Notice to the City Council instructing the Council to provide the information we have requested within 35 calendar days. If it fails to do so, the ICO will consider referring the case to the Commissioner’s enforcement solicitors.

Has the Council something to hide? Is there something in the correspondence with Berkeley that it is determined not to divulge? Or is it just incompetence?

Time may tell, but so far four months have been spent getting absolutely nowhere. It doesn’t look good does it?.

Berkeley’s very brief reply didn’t address any of the issues we raised; it merely said
“….all received and recorded as part of our consultation process”.

That was not a satisfactory response and fails to recognise the Council’s own requirements set out in its Statement of Community Involvement: “Developers of larger sites will be expected to engage with local communities – residents’ and community associations and relevant interest groups…” That’s pretty clear.

On 15 April we received a reply that: “We have registered your questions as part of our Stage 2 consultation and will consider them alongside the other comments we have received in moving our design proposals forward. We plan to hold our next public event in the Summer to update everyone on our updated design proposals when we have collated the planning application documents, at which point we will be able to provide information on detailed aspects of the proposals such as microclimate, overshadowing and affordable housing. We will also be submitting a Statement of Community Involvement and will be sharing the consultation responses received.”

But no responses to our fourteen questions. It looks as though the planning application will be the next stage.

The coalition of 16 amenity groups are pursuing other directions:

A local firm of architects Stickland Wright, are developing alternative site layouts for the coalition based on low-rise buildings with streets and courtyards. It looks as though about 360+ new dwellings could be provided on the site which, though obviously not as many as the Berkeley/St William massive urban conglomeration of high rise blocks, would nevertheless make a significant contribution towards meeting the Council’s housing targets.

We aim to discuss these proposals with the Council soon and in addition to explaining that there is a realistic and much more acceptable alternative to the Berkeley/St William proposals, we hope to give the Council an opportunity to clarify the importance it attaches to the local and wider heritage assets, to the desirability of community involvement, the Green council’s approach to sustainability and the green environment, the contamination risks of building on a contaminated gasworks site and to update us on the latest situation in relation to the planning application – and of course, to ask about our Freedom of Information request.

There’s a lot to talk about. Not that the Council have been very forthcoming so far about anything. 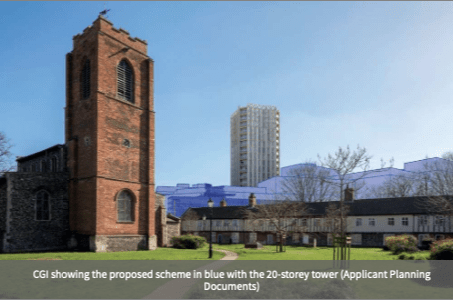 We are also talking to SAVE Britain’s Heritage who were instrumental in getting a development of high-rise blocks and a 20 storey tower block in the historic centre of Norwich withdrawn from a public inquiry primarily because of conservation issues. See the link here 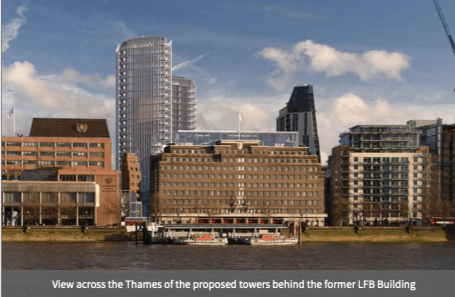 Save Britain’s Heritage also had another recent success in getting two 20+ storey blocks of flats behind Albert Embankment in London turned down at a planning appeal. These would have a severely detrimental effect on the Grade II listed London Fire Brigade Headquarters which is located between the site for the towers and the Thames.  See the link here

We are optimistic of getting their support for our campaign here in Brighton because of the similar detrimental effects on the adjacent historic seafront areas of the Kemp Town Conservation Area and the Grade 1 Listed Kemp Town Estate.

So the campaign continues. A planning application is expected at some time during the summer. Look out for it.