First Base have held three public consultations on their proposals to re-develop the former Amex building site on Edward Street. First Base are the developers behind the Anston House scheme. 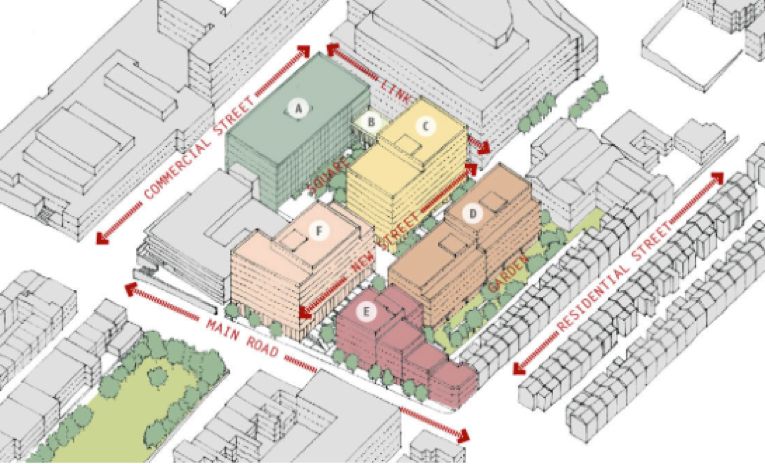 The first consultation showed nothing other than some basic information on facts and figures, aims and objectives on which it requested public comment.

The second one showed some images of sunlit public and private open spaces, and a public square linked by flights of steps, landscaped areas and lots of seats and trees. The surrounding buildings – what one could see of them – were the typical glazed and panelled boxes you would see in any city. Crucially all the images were cropped at the top so it was not at all clear how tall the new buildings would be. We asked but no-one was able to tell us.

Obviously we were concerned that if they were too tall, the attractive looking public spaces would be in shadow most of the day, for most of the year – just as were the open spaces in the nearby Circus Street development which we had heavily criticised a couple of years ago.

Were First Base being straight with the public?

Soon afterwards in early December, we attended a Design South-East seminar (or charrette, as these events are fashionably described), at which a speaker from First Base showed a dramatic digital 3D visualisation of a large part of central Brighton, including far more information on what was planned on the site than had been disclosed at the first two consultation meetings – both of which failed to provide any information on the likely heights of the buildings, let alone the likely overshadowing of the public spaces they enticingly illustrated.

Why not? It must have taken many weeks if not months to prepare the 3D model, and First Base must have known at the date of the two public consultations how much accommodation they were proposing to put on the site, the heights of the buildings and the likely overshadowing of the public spaces they were planning. So why was this information not disclosed to the public?

Presentation to the Conservation Advisory Group

In early January First Base gave a presentation to the Conservation Advisory Group (CAG). For the first time we were able to see how tall the buildings were proposed to be. Have a look at the visualisation above. Can you tell how many floors are proposed?

Crucially, they failed (again) to say how tall the buildings were, and in answer to questions about the overshadowing effect of the buildings on the open spaces, were only able to say this had been tested and it was not a problem. Of course – they said reassuringly – diagrams to show the extent to which these spaces would be overshadowed at various dates during the year would be submitted with the planning application.

The plans showed a new Mighell Street linking the southern end of the existing street down to Edward Street. This would be the main north – south pedestrian thoroughfare created by the development. Enticingly the drawings showed the trees and landscaping continuing up the existing part of Mighell Street beside the new Amex Building up towards the listed Mighell Farmhouse. When we asked whether this landscaping was to be included, First Base admitted this was wishful thinking!

A tall commercial building is proposed on the west side of this new thoroughfare, between that and a new public square proposed just to the south of the new Amex building. This public square is separated in turn from John Street to the west,by another tall-ish building. Same overshadowing problem? Who can say?

To the east of the new pedestrian space are residential buildings varying between about 3 storeys at their south-eastern corner to much taller buildings as to the north-eastern end of the site. They are separated from the existing terrace houses on White Street by a garden space which will be private for residents’ use only.

Our primary concerns relate to the quality of the new public and private spaces as the buildings appear to be high enough to overshadow them for much of the day. The new square could be particularly vulnerable to future development of the building on the corner of Edward and John Street (outside the scope of this proposal), which will inevitably be higher than the existing building. This, together with the tall buildings to the south and west proposed by this scheme, would be likely to overshadow the square completely for much of the year in the future.

There was a final public consultation on January 24th. Only one additional piece of information was on display – an actual 3D model of the development painted pure white. All the buildings were shown – but again no indication of how many storeys high they were! One of the attendants was asked how high they were. She didn’t know and referred the question to the Project Director (who had also attended the CAG presentation). Believe it or not she didn’t know either, and had to resort to peering closely at the model to see whether there were any horizontal lines demarcating the individual floors.

Well, she finally said, because the ground levels varied as the site rose from south to north, the heights would be different depending on where you were. But she thought the highest parts would be eight storeys and the building on John Street would be six storeys – but five on the eastern side adjacent to the square.

Well, we’ll see, but it was not a very convincing explanation. Why were there no site sections? The effect of the proposals would have been so much clearer if there had been,. We are left with the uncomfortable feeling that no-one really wanted to reveal that information, and that there had been an intentional attempt to conceal this vital information at the public consultation stage. All they wanted to do was to tick all the boxes to say that the public had been consulted.

We didn’t get satisfactory answers to perfectly reasonable questions. Talking to a local resident as we both left the exhibition together, he felt the same.

As well as probably being too high, the buildings appear very boxy. This is particularly so when they are considered in relation to key potential viewpoints such as ones from the Royal Pavilion and from surrounding high points. The upper floors are the ones which tend to be most prominent from viewpoints, so a more graceful profile where floors are stepped back as they get higher and are treated in a finer, more transparent style, not only reduce the apparent height and mass of the buildings but would also make them look more attractive.

As mentioned earlier, we would like to see the landscaping quality proposed for the new north – south route extended to include the upper part of Mighell Street and up to Mighell farmhouse as part of the proposals.

Other concerns are the effect of the proposals from various viewpoints within the city, such as that from Dorset Gardens just to the south, views from the Royal Pavilion and Valley Gardens, and from high points from the west such as the upper parts of Church Street and North Street.

Our verdict is that the proposals need to be much more sensitively designed and must get the balance right between the new buildings proposed and the attractiveness of the public spaces they enclose. At the moment, that balance is tilted way too far in favour of buildings that are too high and bulky in relation to those public spaces.

A planning application is expected to be lodged in February.