Does the Council have – or even want – a graffiti policy? 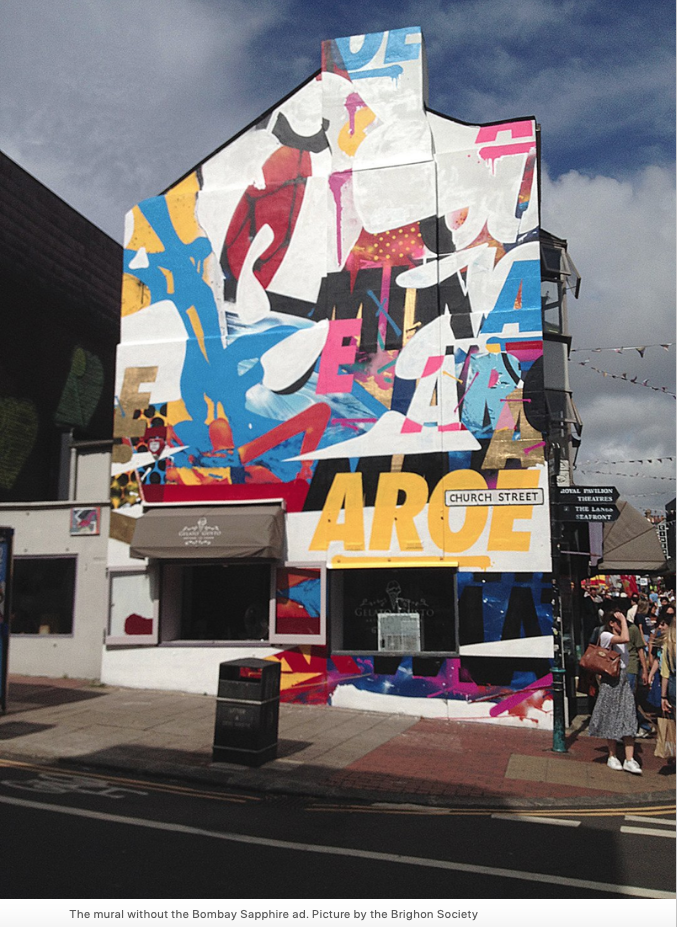 Is this mural – which prominently displays the logo of Aroe the graffiti painter, an advert?

There’s a bit of history to this dispute. Back in August the mural below appeared on the wall of Gelato Gusto at 2, Gardner Street on the corner with Church Street in the centre of the North Laine Conservation Area. The more perceptive of you will have noticed that this is similar to the first image, but differs in two respects: firstly, there is a picture of a bottle advertising Bombay Sapphire gin on the mural; secondly it doesn’t include the large Aroe logo. 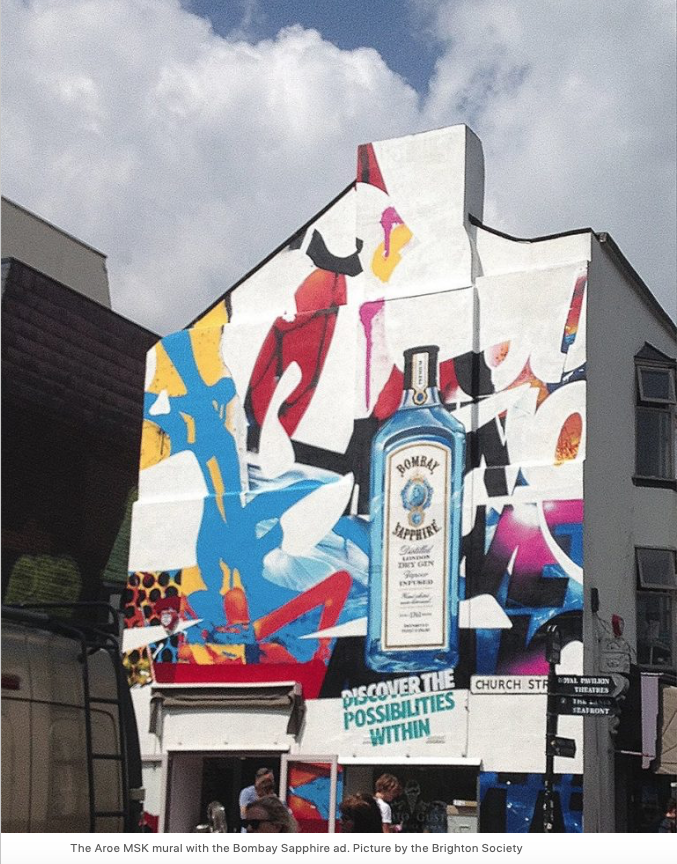 The reason the bottle of gin has gone is because the Brighton Society lodged a complaint with Council Planning Enforcement that the gin advertisement required planning approval which had not been applied for, let alone obtained. So the Council had the advertisement bit – the bottle of gin – removed. Paul Barlow aka AROE painted over it and added his AROE logo in large letters, making sure no-one missed it by scattering more large letters, A, R, O and E over other parts of the mural.

Aroe sells his ‘art’ in a shop in Bond Street (Art Republic) to the south of the building a few yards from the mural. Quite a coincidence. One of his artworks is shown below. Like most paintings it has a signature on it at the bottom right. Is this the same signature as that on the mural which Robin Hodgetts claims is Aroe’s signature? 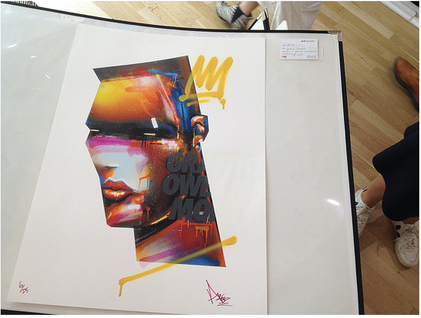 Of course it isn’t. The mural doesn’t show Aroe’s signature; it shows his logo. And a logo is an advertisement.

Here is our letter of complaint to Planning Enforcement.

Further to our complaint to Planning Enforcement sent to you in early September, we have not had any response from you to date as to whether any action has been taken by the Council to remove the offending advertisement shown above.
The Brighton Society considers this painted wall to be an advertisement. An argument that the graffiti artist Paul Barlow, whose trade name is AROE, has not created an advertisement because he has only used his signature on the mural (pictured above) is mistaken. AROE is a brand, like Madonna or Elvis. The way he has used his name on the mural is in the form of a logo graphic, not a signature.
The name Aroe appears not just once, but is repeated in fragmented form elsewhere on the mural in huge letters.  This can in no way be described as a “signature”  It is an advertisement for Aroe himself.

He is marketing himself through his brand logo. The current mural resulted from a modified banned mural, which displayed a large Bombay Sapphire Gin bottle. The mural pictured above, is still an advertisement and the AROE logo in all its forms should be removed. The Brighton Society is not against the use of suitable murals in the city, however we do expect mural artists to respect the public realm and the  planning regulations currently in force and not to abuse them for their own private gain.

We expect Planning Enforcement to enforce the planning regulations and to insist that this advertisement be removed.  Rather than wait another seven weeks for a response, if we do not receive a reply from you within the next seven days, we will email you with a reminder.

I have been asked to respond to your query below regarding the mural at 2-3 Gardner Street.

I appreciate that you are not entirely satisfied with the result but the matter is closed and no further action will be taken at  this address. To be clear, it is our opinion that there is no breach of either planning or advertisement regulations at this property.

The previous design was clearly an advert for an internationally recognised brand and we asked for this to be removed. This was done and the remaining image is not considered to constitute an advert but a mural for which there are no planning controls in this area. It is usual for street art (and most art for that matter) to include a signature of the artist but this alone is not considered an advert. The presence of further information such as an email address or phone number would be considered an advert.

Please feel free to call me on the number below if you wish to discuss this further but the matter is closed and we won’t be taking any further action at this site as there is not considered to be a breach.

We did phone him but the only response we got was that the decision had been made and the matter was closed.

– What actually constitutes an advertisement? Perhaps Mr Hodgetts could clarify whether a logo is an advert or not. And if not, then what is it? It can’t be Aroe’s signature as we can see what that looks like from the image above.

– Why are there no planning controls for murals in the North Laine area? Mr Hodgetts does not say.

– Why do we have conservation areas if the Council is unable to control major changes to the appearance of buildings within those conservation areas? Particularly large and prominent ones such as the Gelato Gusto building that displays this mural/advertisement.

We would argue that in this case, where the mural is very visible at the northern end of Bond Street that it is severely detrimental to the North Laine Conservation Area. And why is graffiti regarded as unacceptable in other conservation areas of the city, yet is apparently given free rein in the North Laine?

– What would the Council say if a large Aroe mural appeared in Brunswick Square or Lewes Crescent?

– What does the North Laine Conservation Area Character Study have to say about painting on buildings in the Conservation Area?  Quite a lot actually, though it was written in 1995, before graffiti became a major problem. But that really puts the current situation in perspective, because it is concerned about inappropriate colour schemes which are out of character and have a detrimentral effect on the visual quality of the conservation area.

Although the Character Study is peppered with references to inappropriate colour schemes, interestingly it talks about a policy of introducing Article 4 regulations to control inappropriate colour schemes. These were never introduced – with the result that 25 years later the Council is now unable to control the visual quality of the conservation area. Even if it wanted to – which Mr Hodgetts apparently doesn’t.

Here are a couple of relevant paragraphs from the Character Study:

Para 7.18 ….The Council has produced a Conservation Fact Sheet on Renders and Paintwork, which also includes a range of appropriate colours for buildings in Conservation Areas and for Listed Buildings. It is also in the process of making Article 4 Directions in certain residential streets in the North Laine to control painting, pebble-dashing, etc.

Para 8.10…. Due to staff reductions because of budgetary restraints, this work was not completed and the Article 4 Directions were not made. It is hoped that on completion of this current study, work can recommence. Whilst it entails a small curtailment of residents’ present planning rights, it also brings them many benefits

– It’s a legitimate question to ask why the Council has failed for the past 25 years to implement the policies set out in its own Conservation Character Study.

in this case the issue boils down to the reasons for the planning authority’s decision on whether or not it considers such an illustration to be an advert – if so, permission is required under the Town and Country Planning (Control of Advertisements)(England) Regulations 2007.

The Council needs to give its reasons why it doesn’t consider Aroe’s typographic name to be a logo and therefore an advert, rather than just saying “the matter is closed”. It has failed to give us those reasons. In the case of planning applications both the decision and the reasons for it are crucial. Why should this be any different? Unless of course there is something the Council is trying to conceal?

There are a lot of questions to answer. Will the Council do so? What do you think?

It seems the Council policy towards graffiti in our city is totally confused, Recently it said it is “considering its approach” after murals appeared on Viaduct Road in March when it had requested residents to clean up the street.

The Council has commissioned street art in the past but now says it is “considering the powers available to us” when it comes to murals on private property, seeking an agreement “for the benefit of everyone”.

The government says it is something for councils to decide, “on a case-by-case basis”. Conservation areas and listed buildings may be subject to “general permitted development orders” or the Planning Act 1990.”

So there are options available to control graffiti.

We maintain that the council has to decide this case based on whether it really wants to tackle the scourge of graffiti in the city or not. And if not – why not?

Dismissing it by saying the matter is closed without answering the questions we set out above is just putting its head in the sand.

That won’t solve the graffiti problem.