You are at:Home»developments»Digging into Sussex University – and the subterranean planning system 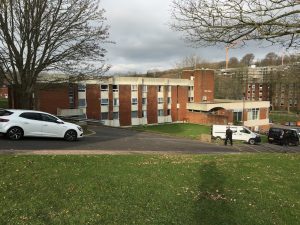 Major planning applications are daunting works. Their sheer volume can deter people from peering into them at all. Introducing a planning application to a group of amenity society representatives, a senior planning officer once joked to us that the hard copy had been delivered in two pantechnicons. Transposed online, applications’ content can run to hundreds of documents, often randomly ordered and bearing opaque, repetitive titles that give little or no clue as to each subject concerned. If there is a contents list or index the details may well not match the page or document numbering of the web format.

Regarding the present Sussex University application, questions of tree removal, biodiversity and environmental impact, as well as the key issues of modernisation and student housing numbers, have received more attention than the matter of demolition, both within the documentation and in official and public discussion. Given that “Demolition” is the first word of the application’s sub-title, this should not be overlooked, inevitable though it probably is that, at this stage, the buildings in question are doomed. They include York House and Lancaster House. 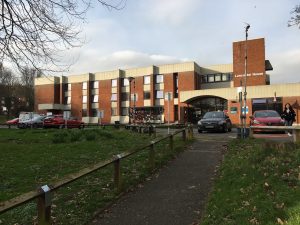 The southern and central area of the site constitutes the north-west corner of the university’s original built and landscaped core, more or less completed in 1965. The land at this part of the site is a combination of a steep bank to the west, overhung by woodland, and a hollow flanked by a level right-angle to the east and the north.  Some of the detached and distinct buildings are a short distance from the Grade I and II* listed buildings; but their own origin and character are more to the point.

The most important of the university’s buildings arose in the first few years of the 1960’s. Constructed between 1963 and 1965, the residential blocks, York House on the west bank and Lancaster House neighbouring to the north-east, were designed by H. Hubbard Ford and/or Ronald Sims (accounts vary) with Sir Basil Spence as consultant architect. Peter Shepheard was the landscape architect for Lancaster House and Frank Clark for York House. Information on the provenance of Kent House proves harder to come by. 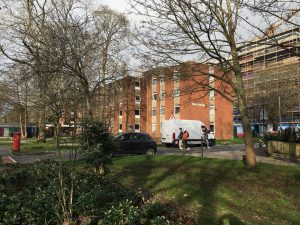 The buildings not only follow the style and priorities of Spence’s more spectacular preceding work; they establish the northern extremity of the entire framework of that early 1960s core. Spence was still actively involved in the overall campus architecture, working with Dame Sylvia Crowe, landscape adviser. Conceivably their removal sets a precedent that might facilitate a future removal of Norwich and Essex Houses, even the larger and more central Bramber House, built nearby at the same time.

In addition to the nine listed buildings at the centre of the campus there are a similar number introduced individually at intervals over the ensuing fifty years that are substantially modelled on the former, just as these are. Unlike the increasingly different styling of many of the more recent outer developments, most are fairly close in character and quality to the listed. Unfortunately, none is locally listed.

The 2013 outline application proposed a demolition of Essex, Norwich, York and Lancaster Houses. In their response, English Heritage commented that all four are of some architectural interest in their own right, consciously replicating the language and materials of the listed Spence buildings. Although not objecting to the demolitions, the city council refused the application for four reasons, one of which involved heritage concerns. In 2015, the appeal hearing was ended after the fifth day when the council withdrew its refusal in all four respects. The appeal was allowed, and permission granted for demolition, after the inspector chose nonetheless to make a statement considering each of the four issues.

On heritage, the inspector confirmed that demolition was permitted, but reminded the university of the advice from (the since renamed) Historic England: that recordings should be made of the four Houses as non-designated heritage assets. Whether any such records have been undertaken or where they might be found is not made clear in the present application; neither is the point at which Essex House and Norwich House were saved and instead Kent House discarded.

The task now of locating the applicants’ detailed defence of their proposed demolition of the buildings has become more challenging. In the revised master plan online, the specific pages describing and illustrating the buildings are missing, while the present application appears barely to mention them specifically at all, either in the planning statement or the design and access statements. 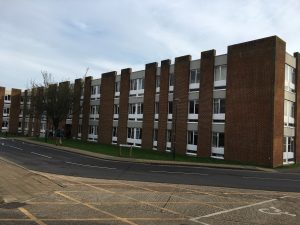 Part of the Arts B Building, Listed Grade II*

Intentionally or not, in their treatment and presentation of the plans, the applicants have permitted – or encouraged – the impression that the buildings are of a quite different order of quality from their neighbours to the south, and no longer contribute to the character of the core setting. Irrespective of the comparative merits of their proposed replacements, it is this apparent disregard and disdain in the cause of demolition that is arguably most concerning.