The Council policy to the GDPR (General Data Protection Regulation) is not fit for purpose. It redacts the names and addresses of those posting objections or comments (including comments of support), from its planning register, so it is impossible to know who is objecting or commenting, whether they are local residents, or whether they come from people who have been “persuaded”  by developers to send in letters of support, and who may have addresses a long way from the site of the proposed development.

It also prevents people recognising the objections from amenity societies such as the Brighton Society which would be of interest to other potential objectors searching the Council register.

In short it is totally lacking in transparency, and is vulnerable to potential abuse.

Believe it or not, it has also taken to redacting the names of the authors of historic documents dating back to as long ago as 1849 and 1908!  This is so ridiculous it deserves to be lampooned in Private Eye. You couldn’t make it up.

Below is an example taken from a Heritage Statement accompanying a recent planning application.  The Victorian architect and engineer whose data the Council is so keen to protect is called Edward Cresy (1792 – 1858). 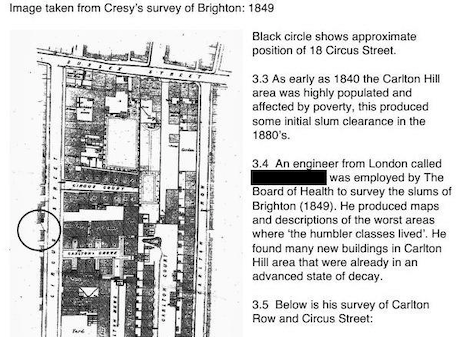 But that is at the ridiculous end of the spectrum.  Much more serious is the way in which the Council’s interpretation of the GDPR could lead to potential abuse of the public consultation process.

We have noticed that several recent planning applications have received a significant number of supportive statements immediately prior to the application being considered by the planning committee.  We asked to have access to the case files to find out who was sending in the support statements.

But when we asked to access the hard copy files, the Council replied that this was no longer possible – the only information is what is on the Council website. When we pointed out that it was important to find out whether these statements were coming from residents or from outsiders, because it is vitally important that the process of commenting on planning applications is fully transparent, otherwise it is potentially vulnerable to abuse, we received the following response:

The first sentence of this response suggests that objections or comments  from local residents are no longer relevant to the consideration of a planning application. They could apparently be from anyone, anywhere. 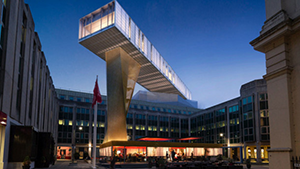 A notorious example of this was the Moshimo Skylight restaurant proposal in Bartholomew Square, (see left), where the number of local objections was deemed to be too low for it to be considered by the Planning committee. It was approved by the officers with the agreement of the then Chair of the planning committee.

The third sentence suggests that objections or comments from non-residents may be equally if not more important than those from residents.

If these statements represent official Council policy, they appear to sweep away the whole basis of how planning applications have been considered in the past.

And worse, the decision to make all the submissions anonymous makes it impossible to assess the opinion of residents. As an example, the submissions for the Longley Estate Development in New England Street were as follows:  64 objectors, 9 supporters. 35 were described as “not available” with just a date given; 8 of these “not available” statements were submitted just before the deadline for receiving comments.

So for 35 submissions, we and the general public are not even able to read the comments.  It is a ridiculous situation.  And it is even more worrying when a planning officer who had considered this application makes the remark that the application had not received many objections from residents.

As a leading Brighton amenity society we regularly lodge objections (or occasionally favourable comments), to some of the major planning applications.  As such we would like to think that our views might be of interest to the general public.  But we have found that reference to the Society has sometimes been totally or sometimes partially redacted from our letter of objection – a few examples are shown below :  it appears to be highly  inconsistent.  Why? 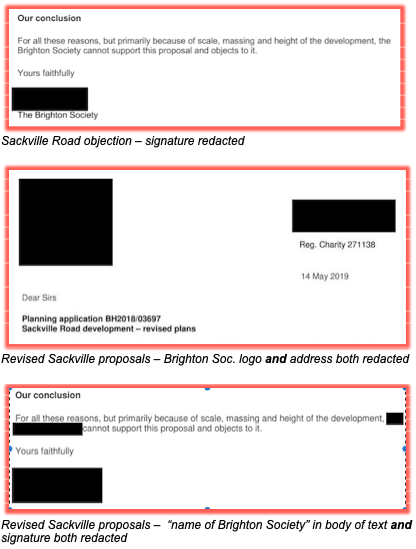 To some extent we have managed to successfully evade the censor by making multiple references to the Society within the text of the objection.  But as the redaction process is inconsistent, it does not inspire confidence that any objection we submit will be recognisable as such on the Council register.

We have also noted a recent case relating to a planning application for the new café in Hove Park which raises some interesting issues about how public comments can be misrepresented by a developer or his agent. Apparently only favourable comments he had received were lodged – but not unfavourable ones. This case was considered by the Ombudsman.  He concluded that there was a lack of guidance from the Council to its planning officers on how to deal with comments by the public submitted to the Council website directly by developers.  We would question whether the Council should accept these comments at all.

This follows another case relating to the First Base application for the Edward Street development (former Amex site), when students stopped in the street were encouraged to sign statements in support of the application which were then sent in by the developer.  They too ended up on the register of comments.

Should not the Council have a policy of only accepting comments or objections directly from the public – not from third parties, such as applicants or their consultants?

We have also seen instances where what are primarily objections are termed ‘comments’ on the Council website.

Combined with the redaction problem, the existing process really plays into the hands of developers; it is totally opaque and is extremely vulnerable to abuse.

How do Other Local Authorities operate?

The decision to use Data Regulations to impose this extreme secrecy is not shared by other local authorities.  The following planning authorities in Sussex show the full details for all submitted comments – name of person, full address and the actual comment:

Adur and Worthing, Eastbourne and Lewes and Chichester (examples of the latter’s register and a typical objection is shown below. 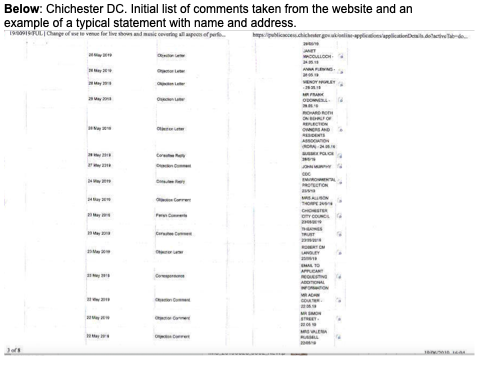 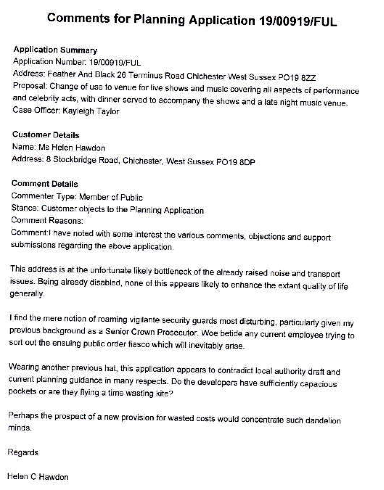 We have also looked at a few larger cities outside Sussex including Cambridge and Bath. All these authorities provide full details on the website and also full access to the hard copy files at the planning office.

We have been unable to find any planning authority that has chosen to use Data Regulations to make the process so secretive.

Compare the planning process that now exists in Brighton to a pre-computer age.  We were heavily involved in the opposition to a proposed high-rise development next to Preston Road Viaduct in 2003.  The planning officers and committee agreed that individual letters from householders living in the area were of high importance. They would be an essential part of the consideration of the planning application. Petitions were of lower status, as were the pre-written postcards that the developer encouraged local shop owners to submit.  Around 250 letters objecting to the scheme were submitted which played a critical part in the consideration of the application.  The application was eventually withdrawn because of public pressure.

It is extremely concerning and frankly wrong for 15 years later the role of residents now to be so diminished and for such secrecy now to be part of the planning process.  The current situation is unacceptable and needs to be urgently reviewed. All it does is obstruct democracy.

The whole issue raises a number of important questions.  Here are ten for starters:

We have written with our concerns and the ten questions listed above to Tracey Hill, Chair of the Planning committee and Liz Hobden,  Head of Planning.  We have received the following reply from the Head of Planning:

“I’ve passed your information on to the Team Managers and we are looking to clarify the level of redaction required and will get back to you.”

So the can is down the road somewhere.