Often it seems as though developers and amenity groups such as ours are at continual loggerheads, and the divide between us seems sometimes to be unbridgeable.  On this website are two entirely different stories: the article, Edward Street Quarter – an exercise in public obfuscation? is an example of how not to do public consultation.  But it doesn’t have to be like that – the article below describes two recent examples of successful dialogues between developers and their architects, and local community groups.

A constructive dialogue, and the opportunity to participate at an early stage in the design process, is likely to lead to a much better outcome for both developers and the local community.

It is a far more rewarding process for both parties than the alternative – which usually culminates in having to lodge a strong objection to a planning application, in the hope that the planning officers and planning committee will take one’s objections on board.

We have recently had constructive dialogues on two projects – both coincidentally on Kingsway on Hove seafront overlooking Hove Lawns. 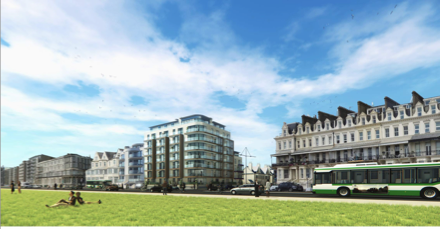 Following a public outcry, and many objections, including a very strong objection from the Brighton Society – Sackville Tower: A picture is worth a thousand words……..–The Hyde Group withdrew its initial (and dreadful), proposal for a 17-storey tower block designed by Yelo Architects.

A new architect was appointed – Guy Goodman of HGP Architects based in Fareham. He (with Hyde), made a point of meeting local groups, including the Brighton Society, to discuss his initial proposals. We had a number of reservations about the design, including the height of the building, , but to his credit, he took them on board and came back with a much better design, which responded to most of the criticisms we and the other groups had made. At a meeting only a few days before the next public exhibition and consultation, we still had a few concerns about the design, and were pleasantly surprised to see that revised drawings were on show which included most of the improvements we had discussed only a few days before. The proposal went on to be recommended for approval by the Conservation Advisory Group and (after discussions with the Council on the provision of affordable housing), went on to receive planning approval.

The dialogue paid off. The city got a building which will make a positive visual contribution to its important seafront location, and provide more housing;  Hyde got planning approval. Hopefully it will get built.

This is a proposal to replace three two-storey houses on Kingsway overlooking Hove Lawns, with a new 5 – 8 storey storey building of 36 flats. It will occupy half of the block between Braemore Road and Berriedale Avenue, the western half being occupied by three two-storey houses which mirror those on the site of the new building. More significantly in terms of scale and future development along that part of the seafront, there are two existing eight storey blocks of flats immediately to each side of the block between Braemar Road and Berriedale Avenue.

The proposal is being developed by Agenda Homes of Chichester. A number of community groups, including the Brighton Society and local councillors, were invited to a preliminary meeting at which some initial ideas and the background thinking behind them were introduced. 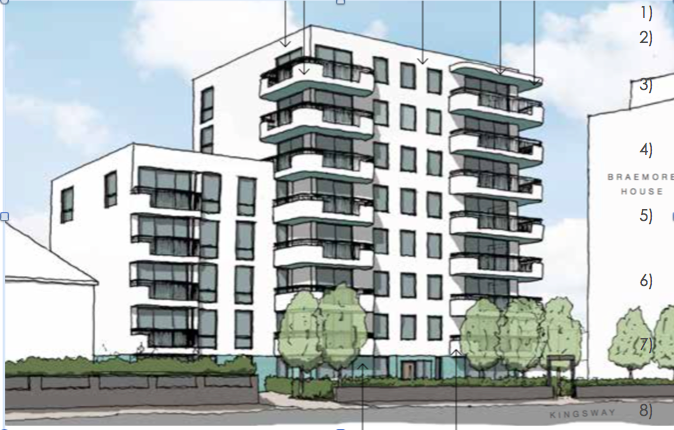 Reactions to this were mixed but Agenda Homes made the following notes on the range of comments received.

1) Try different elevational treatments to add interest and to break up the building
2) White render widely rejected. ‘Grey, dull, no detail, not high quality, not enough detail, look at Sackville as example’.
3) Keen on step inwards on the top floor to lessen the impact of the building
4) Tip – match the rear block design to the block at the front.
5) Strong corner and curved design well received.
6) Stepping down from 8 to 5 storeys is sympathetic to the houses to the West and North
7) Liked the strong corner and curved design.
8) Landscaping – Trees to the front should be very carefully dealt with (sea front, weather)
9) Balconies – raised solid balcony height to hide mess, railings better than glass – generally liked the approach (qualification whether bolt on or integrated)
10) Weather resistant materials – wide concerns on this. This will need significant detailed design and specification
11) Colour – quite well accepted in regards to colour & aqua brick example .
12) Material palette –want high quality materials, proof of this and detail as to what they are. Eg custom made tiles.13 materials being used in Sackville.
13) Comments regarding high level obscure glazing to the North to prevent overlooking.
14) Future proof design for future further development at West of block if at all possible.

A public exhibition and consultation was held soon afterwards – perhaps too soon – at which more developed proposals were presented.  See proposal 2 below. We didn’t think that these fulfilled the promise the initial proposals hinted at, or sufficiently took on board the comments that we had made. The architect, Gary Sutherland of MAA Architects, was present and we had the opportunity to discuss the proposals and make some suggestions for a way forward. 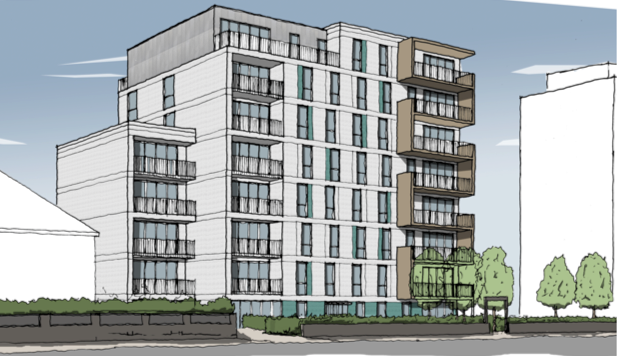 We followed up that discussion with a written list of suggestions most of which were taken on board in the following comments recorded by Agenda Homes after the exhibition. These informed the third proposal and are summarised below:

1. The street corner treatment – the sharply defined vertical screen at the end of the balcony seemed a rather abrupt and weak way to define the corner.  It needs to be a smoother elevational transition, perhaps wrapping the balcony around the corner to achieve this.
2. Ground floor treatment looked a bit insignificant and could benefit from a stronger statement, which could also include a way of marking the main entrance point to the building.
3. The top floor design had been partially set back but it was a bit half and half, and didn’t really tie the building together at the top.
4. The partially solid balustrade shown in the 1st design iteration was better than the open metal railings.
5. Top floor – could include the use of a different cladding material, and would probably be helped by a strong continuous parapet line along the top of the main building below.

Other comments were: the proposal is dull architecturally. Looks like a hospital or office block. Small windows. It is a mish mash of materials/incoherent design. Looking for more of a curved design, coastal contemporary design, art deco.

Following these reactions, Agenda developed some further ideas which were discussed with us and other groups. We felt the result was a much improved design which is illustrated in proposal 3 below. 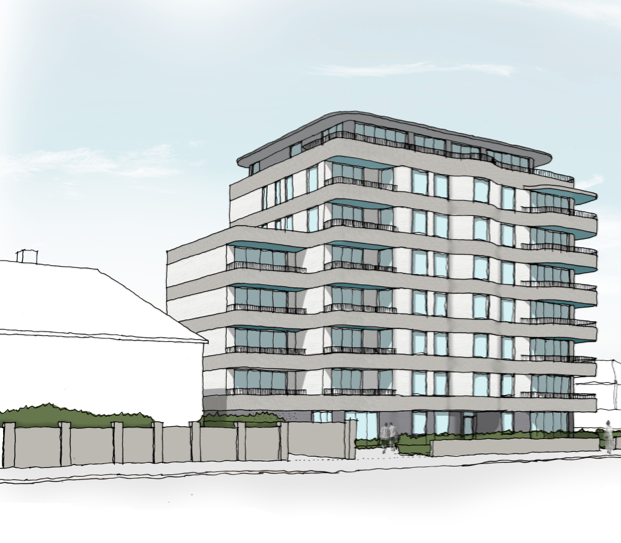 This design has responded to virtually all of our previous criticisms. The corner treatment is strong, the top floor is set back, the balconies are semi-solid and protective, the ground floor treatment is different, with a recessed entrance and projecting bay over it, and the design elements are successfully integrated to create a building form very appropriate to its seafront situation.

There are still one or two minor areas on the rear wing on Braemar Road where we think that integration of the roofs and balconies could be improved and more work needs to be done on the selection of the facing materials – which thankfully – following our comments – are unlikely to be white rendered. And how the building is detailed will be important.

Diagrams to illustrate the likely overshadowing of the properties immediately to the north also need to be done before the planning application is made.

But in terms of the building’s overall massing and form, we think the results to date are excellent. The process of public consultation and the willingness to take on board the comments made, is so far a model for how developers and the community could and should work together on improving the built environment and producing designs of quality for the housing that the city needs.