In principle we support the use of brownfield sites such as the Gasworks site if it meets the following objectives:

So those are the criteria against which we would judge the current proposals.

The Council’s aims for the site as set out in its City Plan are rather more mundane:

How well do the current proposals perform against our criteria?

Some things look good on the surface – the green link for instance – and interestingly we note that Andy Sturgeon is the landscape consultant.  But is this just a publicity gimmick at the early design stage which will quietly be dropped if and when the scheme proceeds into the subsequent design stages?

If these fears are unfounded he will have a difficult job to ensure the public spaces are attractively designed, given the height of the buildings and the relatively narrow overshadowed public spaces left between them.

However, delve deeper and more concerns begin to appear.

The buildings are massive and dwarf the low scale housing just to the west.  It is not clear from the sketches just how high they are – the western block looks to be about five to six storeys, the central block to the west of the green link seems to be mainly 10-12 storeys and the “marker” building immediately to the south of the new square seems to be about 15 floors.  Not much sunlight in the new square then. 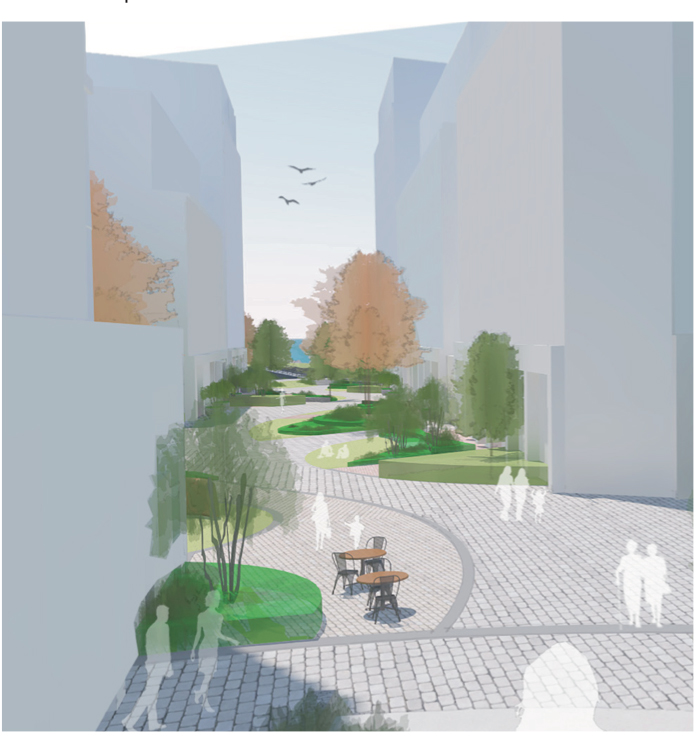 This image is probably the most telling of all those in the document. if it is based on near accurate dimensions, then unlike the misleading sunlit image above, there will be no sunlight at all for much the day and the green link garden areas and the new square will be completely overshadowed

This lack of sunlight in new developments in the city is really important. We recently walked around parts of the new Circus Street development about which we made the same criticism a few years ago – at noon on a bright sunny day all the open spaces were in deep shadow, made even worse in that case by the black or dark grey cladding.  It really is a depressing environment with no sun penetrating into the development.

And this overshadowing problem will extend to the housing just to the north of the Gasworks site on the other side of Roedean Road opposite the tall buildings in the northern part of the site – these properties will never see the sun again.

And to the west, the residents of Arundel Street are going to lose all natural sunlight during the morning and their privacy at all times of the day.

Basically this proposal represents an overdevelopment of the site.  A more suitable maximum height should be governed by the 8 storey Marine Gate building just to the east.  And the western terrace should be closer in scale to the housing in Arundel Street.

The City Plan envisages 85+ new dwellings on the site.  Even allowing for a conservative estimate, this is in stark contrast to the 600 – 700 new dwellings now proposed. The site does not fall within a Tall Building Zone or a Tall Building Corridor.  There is no justification for the tall buildings other than to maximise the profit motive.

This is just another just another overbearing development full of meaningless developer-speak false claims – for example:

We would have expected better from The Berkeley Group, whose founder, the late Tony Pidgley, said last year,  “landowners and developers should be forced to share “planning uplift” with local authorities.”

Not much evidence of that here.  The current proposal contributes nothing to the city except numbers.  It is just another unsympathetic development exploiting our seascape, our landscape and our urban heritage.

On this important site we would like to see a sensibly scaled proposal which is polite to its neighbours, relates to the scale of neighbouring residential buildings, and does not impose on views to the sea from the South Downs National Park immediately to the north.

We have several additional concerns about statements made in the consultation proposals (extracts are shown in italic text in parentheses):

“The scale of the development has been developed with our townscape assessor to ensure all that it is considered from, and has an acceptable impact in, all important local and distant views”

How can it have acceptable impact on views given the dominant effects on views and the landscape created by a conglomeration of tall buildings?

“The proposed heights would range between 4 and 15 storeys. This is set within an existing context of buildings which range between 1 and 9 storeys.”

This statement is plain wrong. 15 storeys does not fit within the existing context.  The 8-storey building to the east of the proposed development – Marine Gate – is of a completely different scale in terms of massing from the  overbearing gasworks proposal with buildings almost twice the height.

This site is not within one of the Tall Buildings Zones which apply to some parts of the city.

3. Tall buildings in the landscape

“These heights will be better integrated into the landscape by making use of the natural topography of the site which slopes from north east to south west.”

“Directly to the south of the site at Brighton Marina there is permission for a 40 storey tower and an   application is pending for a 28 storey tower to take its place.”

The 42-storey tower proposal has been withdrawn and the 28-storey tower has not been approved.  There is no precedent there.

5. Integration into the local area.

“An important next step to ensure that the development integrates into the local area will be the selection of appropriate materials and colours”.

We have already drawn attention to apparently sunlit square.  Here are a few more.

The photograph below shows landscaping that attempts to create a rural naturalism. 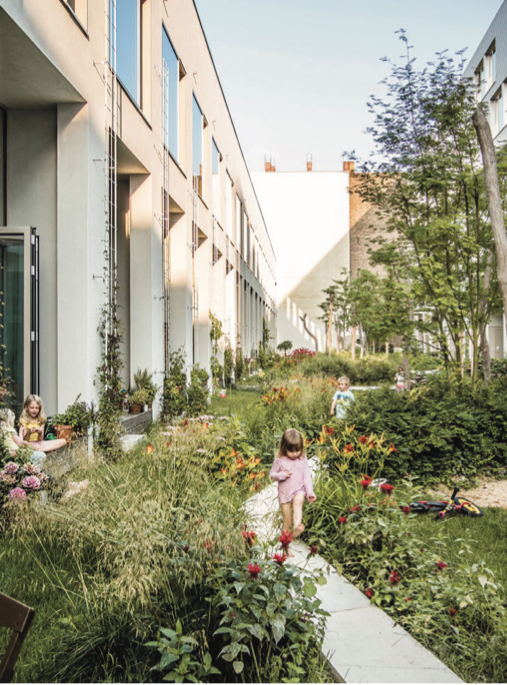 But the proposal is just to create ’garden areas’ such as those shown below, which are typical of the usual promotional utopias developers attempt to sell to a gullible public, trying to hoodwink us into believing that these images based on “geological strata” echo nature. 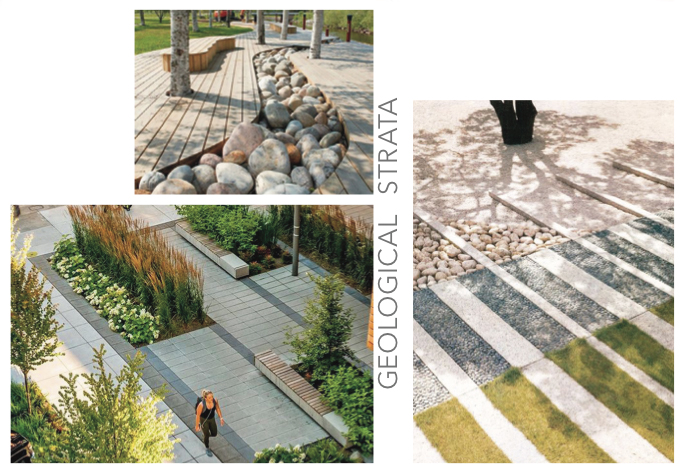 There are ‘precedent developments’ the developers inform us that are shown in the document that should sound alarm bells. Is that a skyscraper we see in the distance? 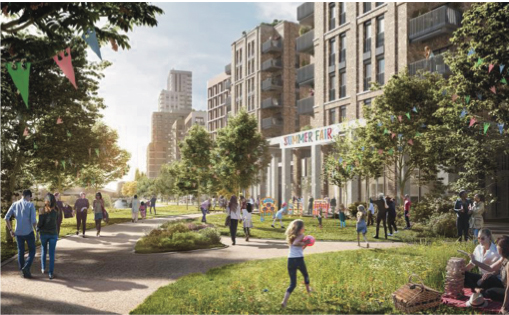 7. Relationship to the South Downs

This is just another example of nonsensical developer-speak.

Although the Council development brief includes provision for this, given that we are now in the age of Covid and a recession (or worse a depression) may be on its way, is it appropriate that commercial elements are being included into the development plan for this site?

If the small units, were removed, the buildings would not need to be so high.

There is no contribution or proposal to improving access across the A259 to the Marina. That could be a significant improvement if it were linked in to the Council’s own proposals to improve pedestrian links and access between Black Rock and the Marina.  At the moment that is a disaster area desperately in need of completely replanning and upgrading.

Will a proper archaeological evaluation and record be made of the existing gasworks site and installations to ensure that anything of historic value which could be conserved and/or recorded and put into the public domain is carried out? Historic England has set out its Guidelines for the evaluation and recording of Gasworks and Redundant Gasholders.

We note that the Berkeley group has had considerable experience elsewhere in the country of developing former Gasworks sites, so it probably understands the the economic risks of developing such sites better than most.

In conclusion, it seems as though there will be a return to business as usual after Covid with little consideration given to the impact these sorts of developments have on peoples’ lives, their homes, their neighbourhoods and urban environment – and their heritage.

Minimising space and maximising profit seems to be the developer’s primary raison d’être and with local government financially chastised, the only hope to protect our city from these monstrous, over-bearing developments is that the profiteers have a change of heart – which is probably highly unlikely.

One could have hoped that the Berkeley Group might have taken a more enlightened view of the role of the developer in relation to the public interest, given the views of its founder referred to above.  It’s very disappointing that this opportunity has been ignored.

So it is up to the citizens of Brighton & Hove to act to prevent this kind of aggressive form of development from seeing the light of day, and to reject this proposal as it stands.