You are at:Home»features»Brighton Society Response to the Hove Station Neighbourhood Plan

Its current designation (which has lasted for 5 years) expires on 18 September 2019.  The forum has applied to the council to formally renew its designation in accordance with the Town and Country Planning Act 1990 the Localism Act 2011 and the Neighbourhood Planning (General) Regulations 2012.

In order to renew its designation it has to put its Plans out for public consultation.  They can be viewed here: 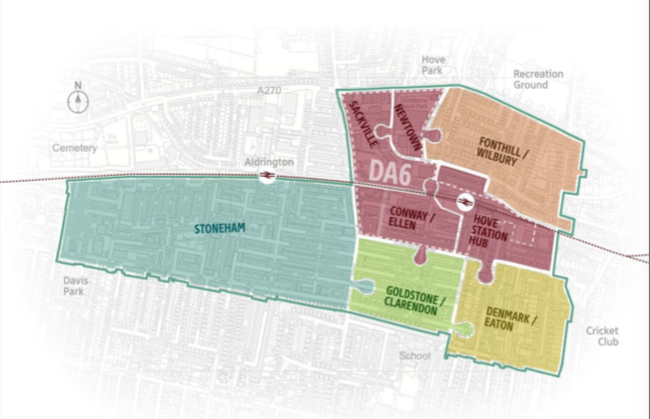 The Brighton Society has submitted a response to the consultation Thumbs down!  Here are our comments and concerns :

Although we realise that the Neighbourhood Area has now been established for a few years It does not come over as a cohesive neighbourhood.  Stoneham consists of small family houses, located well to the west of the immediate Hove Station Area. Fonthill immediately to the west and north of the Hove Station central area, is mainly larger family houses.  And the Goldstone/Denmark area to the south is mainly large villas mostly in multi occupation.

There appears to be little connection between these areas – they represent very different populations and communities, some of which might have closer relationships with other areas outside the Hove Station neighbourhood than they do with the immediate area around Hove Station.

For example Stoneham residents would feel more part of Poets Corner, the Goldstone/Denmark area part of the villas running down to Blatchington Road, the George Street and Church Road shopping areas; the Fonthill area (to the north of the railway) would feel closer to Hove Park.

So if you wanted to create a Neighbourhood Plan that includes these very different areas would you not try to create an inviting neighbourhood heart in the centre close to the station for residents to enjoy  pleasant open green environments and open spaces?  Has the Neighbourhood Forum achieved this? 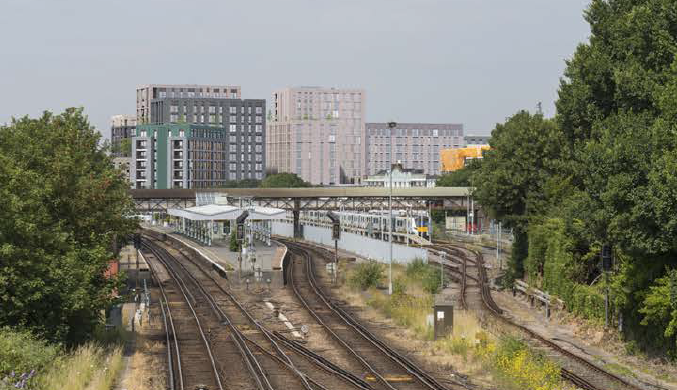 The answer has to be no – look at the illustration above.  As a result of the policies the Neighbourhood Forum has been discussing with developers Matsim, Mountford, Moda, KAP and others, those central areas will now be filled up with high rise buildings that appear to have little relationship to each other. So you have to question what all this effort in creating a neighbourhood area and a neighbourhood plan has been for – other than to act as a Trojan Horse for development interests. 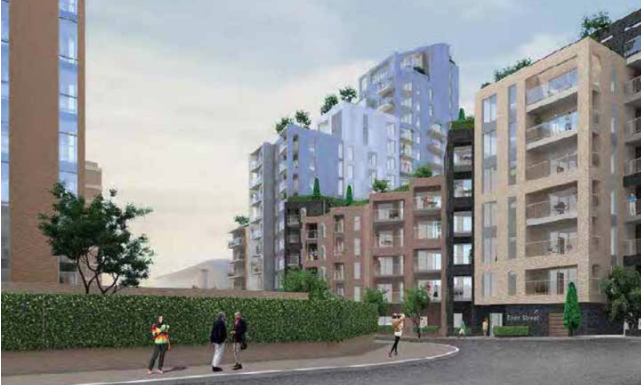 It seems that main purpose of the Plan is to promote prominently high rise development in the DA6 development area.  When you look at the number of pages on the different areas, about 50% of it is spent on the Sackville, Newtown and Conway street areas where redevelopment is the main emphasis.

Potential benefits of the Plan

Because of the number of sizeable potential development sites, particularly within the DA6 area, there is merit in the idea of producing an overall co-ordinated plan for this area alone. It is useful that the Plan clearly marks out and analyses the different sub-areas, and it appears that efforts have been made to consult local opinion, though whether the results to date will receive the approval of residents in the Hove Station neighbourhood area as a whole and other residential areas nearby remains to be seen.

We would have expected that an acceptable Neighbourhood Plan would have major sections on Housing, Employment, Transport, Conservation, Environment – but in almost every case except Transport, discussion of these issues is minimal.  For instance the area contains a number of important Conservation Areas, and some Listed Buildings including Hove Station itself,  but there are only 3 pages on conservation in the document.

We consider that other important criteria are also missing from this Neighbourhood Plan.  Things like local character and scale, a sympathetic approach to building heights, and the relationship of new developments to existing communities.  And design quality and appearance.

There have been a couple of recent pronouncements by Government ministers and Advisors which are very pertinent to neighbourhood plans.

The first – about new housing – is by Kit Malthouse, deputy mayor of London between 2012 and 2015, and until very recently, Housing Minister.

“….local authorities, and particularly in areas that have a neighbourhood plan, have the power to show their local people that they can both satisfy the aspiration of the next generation to have these homes, but at the same time give local people the sense that the stuff that’s being built will be an ornament to the area, will enhance it.”

“Councils should”,  Mr Malthouse insists, “aspire to build the conservation areas of the future.”

The second is by Professor Sir Roger Scruton, a philosopher and academic, who until has just been re-appointed to the chair of a new Government commission that will “champion beautiful building”.  He said:

“All new homes should be beautiful” and he warned “that British skylines are being “mutilated” by skyscrapers and tower blocks. It shouldn’t be a great fist thrust into the heavens. It should decorate the skyline. This commission will kick start a debate about the importance of design and style, helping develop practical ways of ensuring new developments gain the consent of communities, helping grow a sense of place, not undermine it.”

We suggest it would be a useful exercise to see how the Hove Station Neighbourhood Plan measures up to these two statements, in particular the three current large development proposals.  These are:

17-storey proposals for Ellen Street (recently approved on appeal),  with which the neighbourhood forum have been closely involved, and indeed actively promoted;

The Sackville Road Industrial Estate, a huge conglomeration of tall blocks varying between 10-13 storeys, (recently refused planning approval – but it will be back);

The KAP site for a large development including tall buildings of 11 and 8 storeys  just to the north of the Sackville site on Newtown Road. 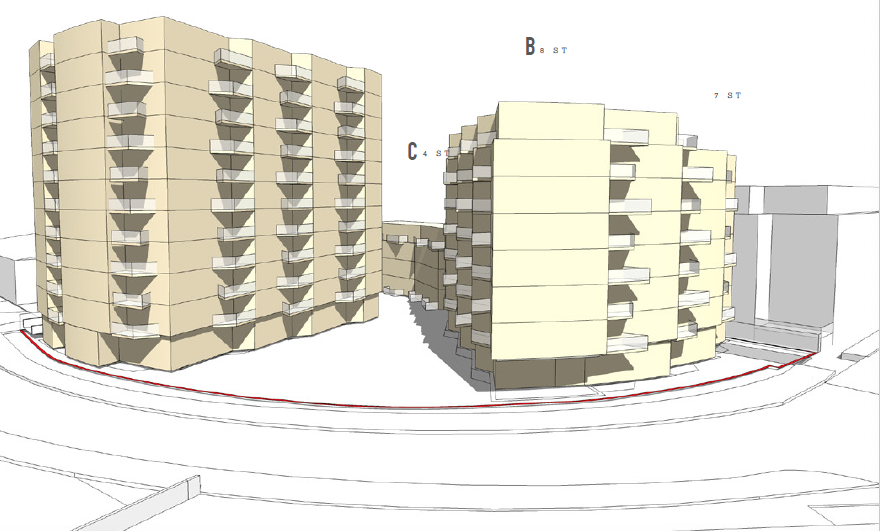 To be fair, the Neighbourhood Forum have lodged an objection to the KAP planning application on the grounds that it is overdevelopment of the site.  This is rather surprising given that the other two much larger and taller  developments to the west and north west of Hove Station, have been supported by the Neighbourhood Forum.  But all three demonstrate all too clearly the unfortunate result of the  influence the Forum has had in promoting huge and dominating developments in the centre of Hove including their regrettable impacts on its character, scale and  appearance.

Is this a plan which local residents across the whole of the Neighbourhood Forum Area can get behind and really support?

Why would they want to do so if all it does is to encourage huge developments which only create more problems for the local community in terms of demand for school places, medical and dental facilities, residents’ parking, children’s play spaces, and imposes more pressures on local parks – especially Hove Park and the community facilities the park offers.

And in addition to these, what about the overpowering effect such huge developments will have on the Hove skyline, the existing pattern of development and character of Hove, its Conservation Areas and listed or locally listed buildings, – besides the loss of the last remaining views of the sea from the locally listed Hove Park which will be blocked by these tall buildings?

It would appear from our reading of both the Policy and Aspiration documents that both community and visual considerations have not only been ignored, but conglomerations of tall and bulky buildings appear to have been actively encouraged by the involvement of the Hove Station Neighbourhood Forum in the development process – to the future detriment of the appearance and character not only of Hove, but also the city of Brighton & Hove as a whole.

Perhaps this would have happened anyway if there had been no Neighbourhood Forum or emergent neighbourhood planning policy.  But despite the involvement of the Neighbourhood Forum, the likely results so far do make you question what benefits the forum has brought to the communities of Hove and its visual character.

If this neighbourhood plan, as one of the first in the city, is to set a model for others, there are lessons to be learned.

To borrow the words of Kit Malthouse again – is the Hove Station area – as proposed to be developed – “likely be a Conservation Area of the future?”

And – in the words of Sir Roger Scruton: “British skylines are being “mutilated” by skyscrapers and tower blocks. It shouldn’t be a great fist thrust into the heavens. It should decorate the skyline.”

How does the Hove Station Neighbourhood Plan measure up to these two officially sponsored aspirations?