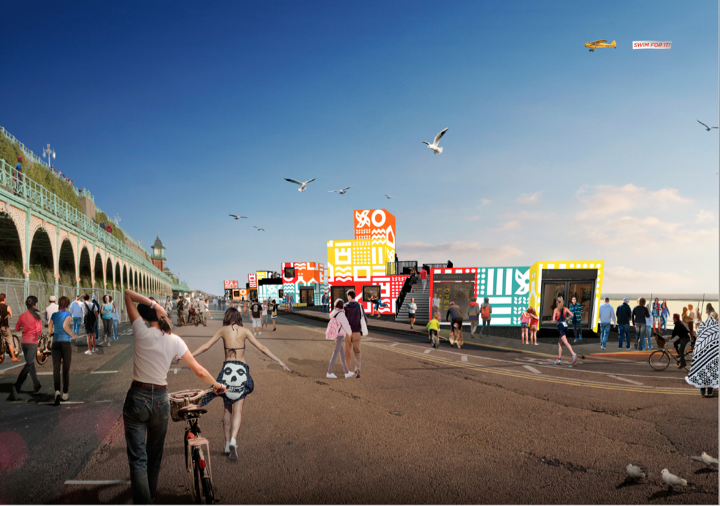 “The effect would be that of gaudily painted shipping containers dropped on to the beach.” 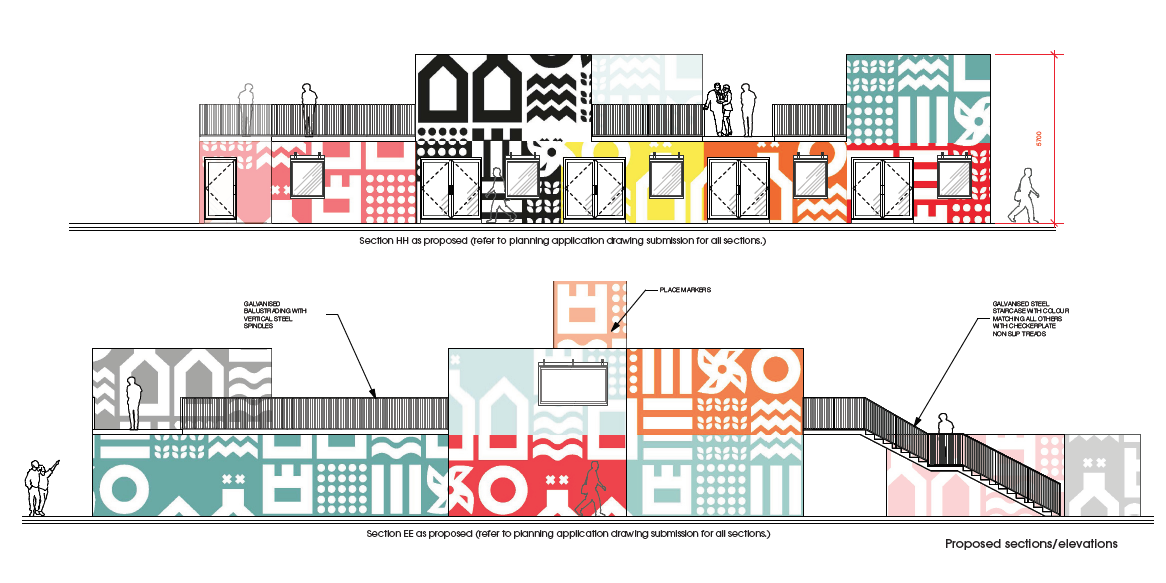 We previously published an article about this proposal – see Sea Lanes &#8211; Five years of boxing daze?

We subsequently decided to lodge an objection in the following terms:

1. Scale and appearance
Its scale and appearance would be out of character with the site’s important location on Madeira Drive within the East Cliff Conservation Area and close to the Listed Madeira Terraces and would have a detrimental effect on both these Heritage assets.

These detrimental effects are made worse by the temporary character of the proposed structures proposed, which is a direct result of the proposed 5-year limit on the planning approval.

“Peter Pan’s playground currently detracts from the appearance of the conservation area due to its random collection of ramshackle buildings and other structures and the poor quality of its immediate environment. The council will seek to use its powers to achieve a better quality children’s play area, with buildings and structures clustered together in a visually co-ordinated manner, and high quality hard and soft landscaping appropriate to the seafront location. Replacement buildings of a high standard of design will be encouraged, which respect the appearance of the conservation area not only in views along Madeira Drive and from the beach, but also from Marine Parade above. No expansion of the boundary of the playground will be acceptable. Single storey buildings only will be appropriate, with careful attention paid to the design and material of the roofs, and no amusement or ride should exceed the pavement height of Marine Parade, including when in use.”

3. Questions
We would pose the following questions: the answers confirm our views.

1. Is this design of high enough quality?
Answer:  NO.

2. To what extent is the quality of design and appearance related to the temporary nature of the proposal?
Answer: T he temporary nature of the structures has had a major detrimental effect on the quality of the design. A permanent scheme would require a much higher level of design quality. So why should this proposal even be considered in such a sensitive and historic area of the city?

3. How well will the temporary buildings weather during the five year period?
Answer:  We are very dubious that the appearance will be the same at the end of the five year period as it might be at the beginning. In fact it could look decidedly tatty. Is that what we want to see on our seafront?

4. How well do the new temporary and colourful structures relate to the backdrop of the historic Madeira Terraces and the Regency buildings along Marine Parade?
Answer:  Basically they have no visual relationship in either appearance, form, scale, materials or colour.

5. Will it just look tacky?
Answer: YES. The effect would be that of gaudily painted shipping containers dropped on to the beach.

6. To what extent does it prejudice the views of the beach and sea from Madeira Drive, Madeira Terraces and Marine Parade?
Answer:  Apart from a few narrow diagonal views through the temporary structures all views from Madeira Drive looking towards the sea will be completely blocked. Because many of the buildings are two-storey – in contravention of the recommendations on the CA Character Statement, views through to the sea beyond from the upper levels of Madeira Terraces will also be partially blocked.

7. At the end of the 5-year period:
7.1 Will it set a visual precedent for a more permanent proposal?
Answer: There is a danger that it might unless strict conditions based on the recommendations in the CA Character Statement are imposed at this stage.

7.2 Should it set a precedent for a later permanent scheme?
Answer: In our view most definitely not.

7.3 Will there not be a temptation to leave sections – or even the whole development – in place, rather than remove it altogether at the end of the 5-year approval period?
Answer: Yes – the applicants will inevitably wish to argue for retention of some if not all of the structures at the end of the 5-year period. This will – if this application is approved – lead to the disadvantages of this proposal in terms of quality of design, and respect for important Heritage assets, being permanently imposed on the city. This is not acceptable.