Planning application Ref. BH2020/01951
We acknowledge that Cannon Place is currently a very unwelcoming environment, but the whole site is part of the Regency Square Conservation Area and a number of listed buildings and buildings of historic value are either on or very close to the site.

These include the Waterhouse designed main hotel building, and the Wilds and Busby designed façade to No.1 St Margaret’s Place – the Royal Newburgh Assembly Rooms – as well as the  exquisite Grade II Listed early 19th Century houses at 31 – 32 Cannon Place and the Regency terrace 27- 30 just to the north – all of which are only 4 storeys high. All these would be dwarfed and dominated by the height and mass of the proposed development, which including the plant enclosure on top of the accommodation floors, is effectively 8 storeys high.

This existing historic context sets the bar at a very high level to which the design of a new building on this site must aspire.

The site occupies a transition zone between the post 1960s areas of Churchill Square and Sussex Heights to the east and north, and the historic seafront and Regency buildings to the south and west.

The argument in the application documents that the post-war car parks on the eastern side of Cannon Place and other unsympathetic 1960s developments in the immediate area diminish the significance of the surviving Regency facades and buildings is nonsense – on the contrary, they emphasise how important it is for the significance of these surviving historic elements not to be further compromised and threatened by yet more unsympathetic development.

It is therefore important that any design on this key site not only results in a vast improvement over the existing appalling 1960s buildings in Cannon Place and St Margaret’s Place, but also creates positive and sympathetic relationships with the historic seafront including the Victorian Grand and Metropole hotels, as well as the remaining Regency buildings on Cannon Place and St Margaret’s Place.

Within the site itself is a secondary transition zone between the scale of the main Metropole Hotel building on King’s Road to the south, and the four storey listed Regency buildings in Cannon Place and St Margaret’s Place to the north.

How this design performs in resolving all these relationships, situated as it is between all those existing buildings, is key to evaluating its success or otherwise on how the new building relates to its setting, and whether or not it creates polite and sympathetic relationships in terms of scale and architectural quality with its historic neighbours – which in this part of the Regency Square Conservation Area – it needs to do.

The question that has to be asked is – does this proposal meet that aspiration? We have concluded that the answer is a resounding NO.

The scale and appearance of the new building with its metal clad upper floors built right up to and abutting the listed buildings at 31-32 Cannon Place and 1 St Margaret’s Place will completely dominate and overpower them – and the Regency terrace just to the north.

The hideous large expanses of the zinc clad upper storeys of the hotel are inappropriate and out of scale in the context of the Conservation Area. 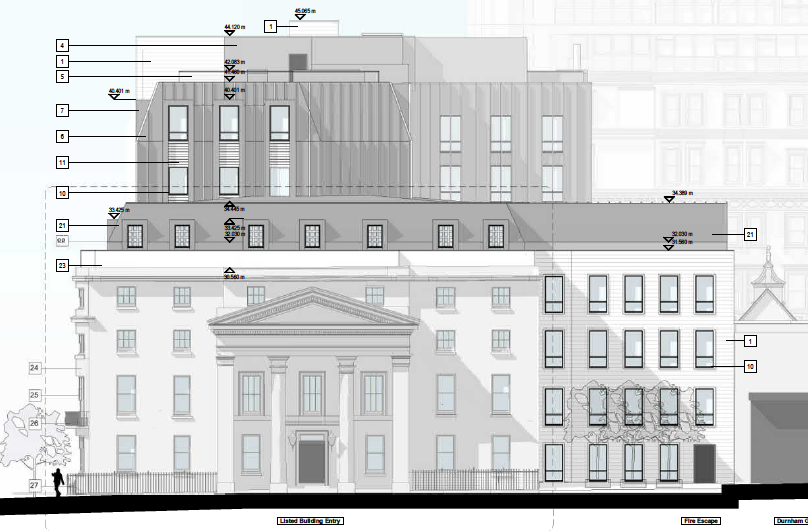 The mansard roof and dormers awkwardly superimposed on the top of the Assembly Rooms make a nonsense of the Classical portico below.

It is frankly visually illiterate, and is a completely inappropriate response to the problem of creating an additional storey on top of a classical façade.

In our response to the public consultation https://www.brighton-society.org.uk/brighton-society-response-to-the-cannon-place-hotel-public-consultation/ we criticised the solid wall elements of the hotel as being bland, uniform and characterless. A more strongly modelled appearance with more variety would be far better – we thought. Not much Wilds & Busby design quality reflected there we said.

Interestingly Lichfields made no mention of the Brighton Society response to their public consultation in their Planning Statement (though the Regency Society and Regency Square Area Society were). Perhaps it was deemed to be too critical.

But the latest proposals are even worse. Yes, the façade is more modelled, but the way it is done is frankly banal, and with its concrete framed wall and window elements and cladding is reminiscent of some of the worst 1950s local authority designs.

The so-called tower at the south eastern end is particularly inelegant. It is argued in the D&A report that “it strengthens its vertical emphasis by giving it a more slender proportion (taller and narrower) and altering the cladding and window arrangements into vertical ribbons.”

It completely fails to achieve that objective. This is not good design.

Regrettably it represents incompetent fiddling with the visual language of elements of construction (the term “architecture” would promote it above its station), with no appreciation of how those elements if used creatively, could result in a meaningful architectural expression which would contribute to the character of the Conservation Area rather than detracting from it.

In conclusion, judged against the criteria we set out above, this design fails to meet the high standards of high quality and sympathetic design which this important site demands.

It is an overbearing, poorly conceived and poorly designed proposal, out of context with its Conservation Area surroundings in terms of scale, form, detailing and materials. It attempts to cram too much accommodation on to its sensitive site. In other words it represents commercial exploitation of a historic area of the central city – at the expense of our heritage and urban environment.

Brighton deserves better than this. This proposal should be sent back to the drawing board.