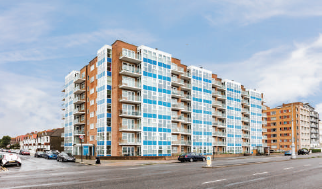 The Brighton Society objects to the above proposal.

We have been involved in discussions with developers and their architects on two recent proposals for new buildings along Kingsway on Hove Seafront.

The first was the Sackville Hotel site. We objected strongly to the first proposal for a seventeen storey building on this site. Following withdrawal of that application we had a good dialogue with the architects for the second application which proposed an eight storey building which we felt was the maximum height suitable for any new building along that length of Kingsway.

We subsequently had another excellent dialogue with the developer and his architect for a new building at 239 – 243 Kingsway which again resulted in a building of eight storeys.

Both these buildings were of high quality design. We described our experience of working with the developers in an article on the Brighton Society website – Building bridges – Developer Dialogues

As a result of these discussions we concluded that the optimum height for any new developments along the Hove seafront should be no higher than eight storeys, in order to maintain as far as possible (given the existing situation), a consistent visual character and height along the whole of the Hove seafront.
One of the over-riding characteristics of Brighton’s seafront and in particular the pattern of development set by the older and Regency seafront buildings, is the general consistency of height along the seafront.
The disruptive effect of taller buildings intruding into this consistency is demonstrated further to the east by unfortunate exceptions such as the Holiday Inn and Sussex Heights.

It is important for the Hove seafront that as far as possible, the existing pattern and consistency of building height is maintained and that development pressures are not allowed to prejudice that – even where only one extra storey is proposed as in this application.
Once one such application is approved, a precedent is set which will inevitably be followed by others.