The meeting opened with an important question and a demand – how do we make the Council aware of our concerns about graffiti? And we want action with the graffiti problem that is blighting our city. It was suggested that an important prerequisite to moving forward will be to read the Council’s  Graffiti Reduction Strategy (2018). This will give us an understanding of the problematic points outlined within the document and therefore enable us to work together with one voice to start to resolve its flaws. The Brighton Society suggested that in order for individual groups to have an effective voice when corresponding with councillors and the Environment, Transport and Sustainability Committee (ETS) in particular, we should aim to co-ordinate our criticisms and arguments and deliver them simultaneously. The posting online, of any issue regarding graffiti, should be carried out at the same time of day to create maximum impact. There needs to be a group collaboration regardless of whether the issue is within a particular ward or not. 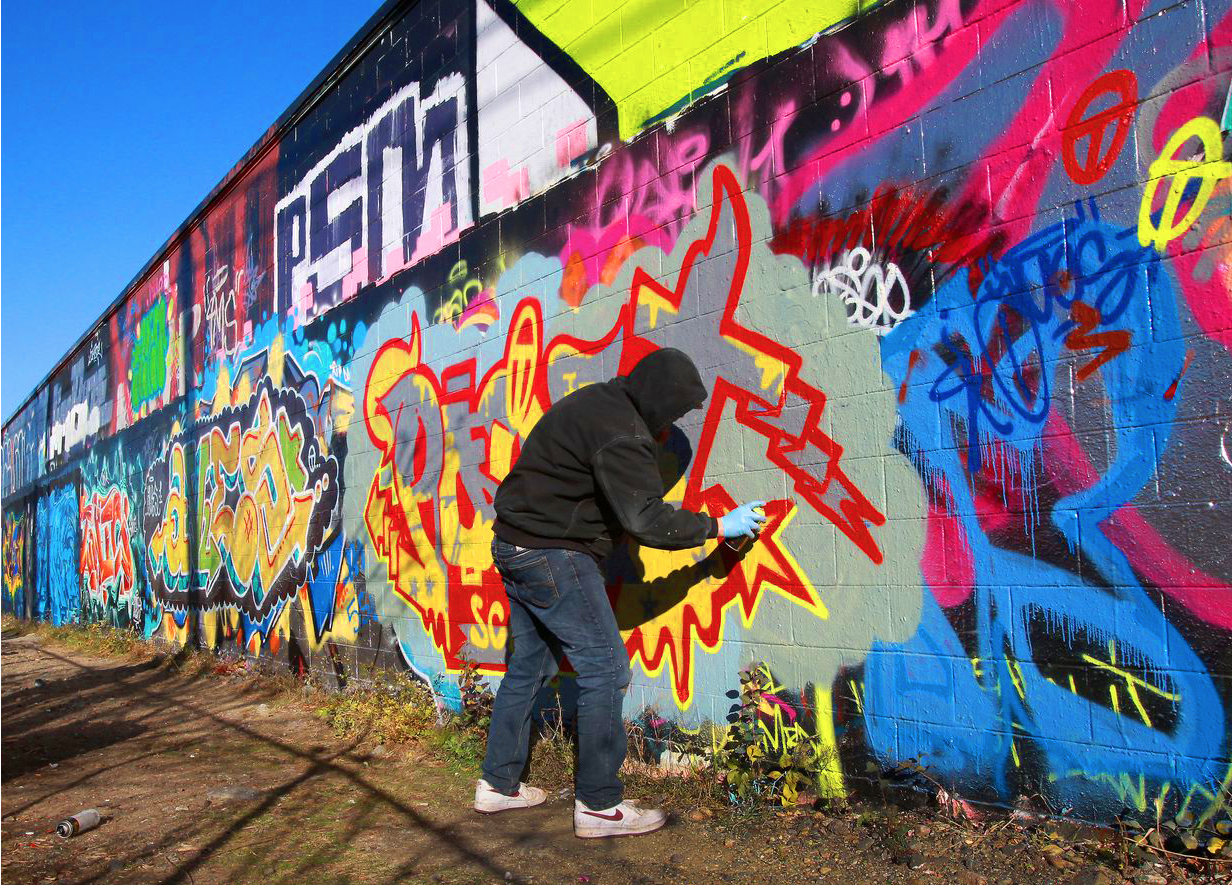 As a starting point, it was suggested that a letter or email summarising our concerns be sent to councillors and Police. What was clear from this part of the discussion was that there needs to be this kind of co-ordinated response because a success in one area of the city will only drive the problem elsewhere. Chichester had a graffiti problem, albeit on a smaller scale than ours, yet the local Council and the Police took a positive action and successfully eliminated graffiti from its streets, which is the opposite of what many feel is happening in our city. The Police, it was agreed at the meeting, were failing to make a significant impact by not enforcing the 1971 Criminal Damage Act. It was suggested that there should be more pressure be put on the Police Commissioner to act.

It was thought that there exists a cultural issue driving the graffiti that is not helped by the Council encouraging murals, which they see as a way of preventing other forms of graffiti. Indeed, Jim Gowans from the Conservation Advisory Group (CAG) and the West Hill Community Association (WHCA) affirmed that this issue was exacerbated by Council officers and agents (e.g. Visit Brighton) commissioning paintings on the city’s pavements. Certainly, a change of attitude in the Council was felt necessary combined with strict enforcement, such as catch and punish if change was going to have any hope of success.

One form of action proposed was that individual groups compile a photographic archive of graffiti found in their areas to present to the Council and the Police. This could be updated on a regular basis and used to put pressure on ward councillors to act or risk their electability. The discussion then led on to more specific points, such as the need to focus on graffiti styles – tags, throw-ups and Wildstyle – and whether the latter two styles were acceptable in the city. 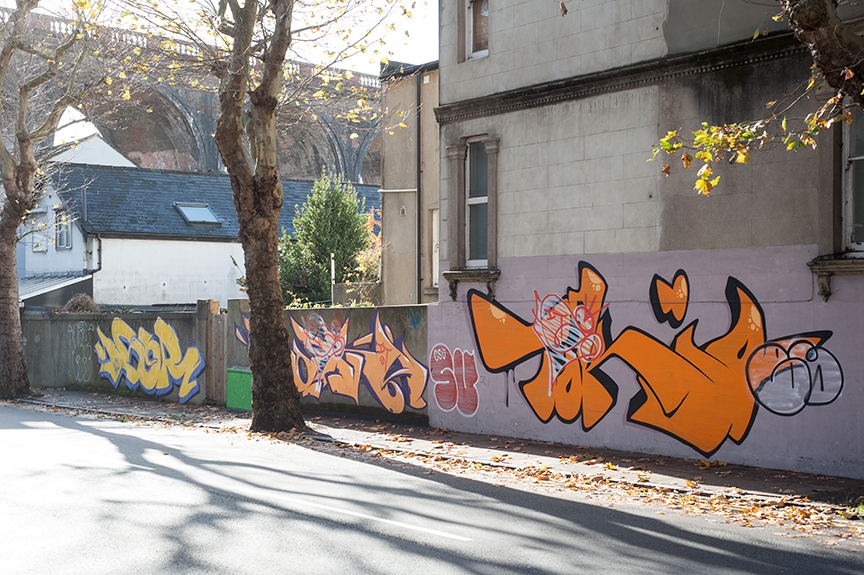 As the meeting progressed the many deficiencies in the Council’s Graffiti Reduction Strategy were highlighted. The joint chairman, Jim Gowans, as joint Chairman of (CAG) thought the Strategy’s shortcomings would be a legitimate item for CAG’s next agenda in August. However, Robert Rosenthal from the Southdown Rise Residents’ Association held the view that the Strategy was very good and that it was good to have it established. He added that, it may not be perfect and even though the items in the strategy may not have been implemented he thought it was an enormous step in the right direction. Rory Connelly from Palmeira & Adelaide Association said that the council-owned buildings in this area of the city were cleaned swiftly when reported

The question throughout the meeting was, if there is a strategy in place, then why, given the amount of graffiti in the city, are the Council not doing what they have committed to do in the strategy? The Council have placed great emphasis on working with their partners as part of the strategy. However, during the meeting various speakers told of the difficulties they had experienced with some of these partners. The Police came in for some criticism with regards to their ability to respond affectively to taggers. However, as the Waitrose representative Mark Kennett pointed out, it was difficult for the Police because of the time the tagging generally happened – out of store hours and that the offenders are frequently hooded. All Waitrose can do at present is to log a graffiti attack with the Police and wait until the offender is caught, then Waitrose could then prosecute as they would do for a shop lifting offence. Mark Kennett added, however, that the Police have such limited resources that it is challenging enough to get them to attend a case of shoplifting, let alone  a tagging incident. This brought forth a number of suggestions; one, that £12,000 per annum Waitrose spends on cleaning graffiti off the exterior walls of its Western Road branch, perhaps that money might be better spent hiring a security firm to patrol the outside the store immediately after the walls are cleaned. It was thought likely that within a few days the graffiti vandal would return, then they could be apprehended, fined and prosecuted. However, Mark Kennett pointed out that only Waitrose head office could  authorise hiring a security company for this purpose. A further limitation, he added, is that the space outside the store is owned the Council. 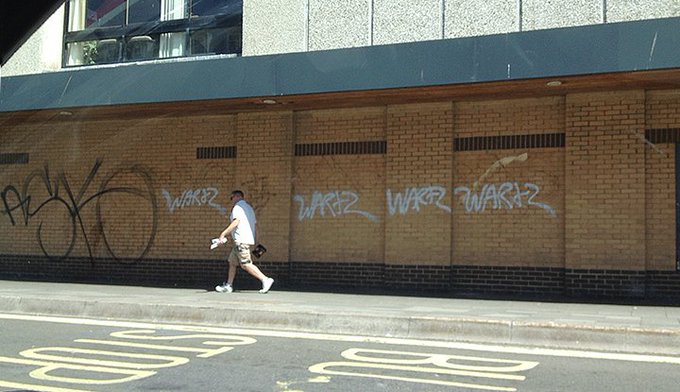 Following on with the idea of a patrolled space Robert Rosenthal, suggested there should be a Town Centre Management Team comprising of town centre wardens with a responsibility for a specific locality. Once their designated area is cleaned up, they would help to maintain it as such. He also thought that businesses would be crucial in driving this forward. It would involve the installation of CCTV cameras, to monitor and generate a quick response in apprehending those responsible for a graffiti crime. A Brighton Society representative suggested a contribution from Waitrose and other businesses could help fund a Town Centre Management Plan.

Jeremy Mustoe pointed out that there doesn’t seem to be any political will by the Council to improve the town centre. This certainly appeared to be the case when the Brighton Society’s Graffiti Action Group met representatives from Cityclean and the then Chair of the (ETS), Anne Pissaridou. The group was told at that meeting to put a lot of faith in the newly appointed field officers who, according to the Council website “bring council services out to the city’s communities” between midday and 8pm, seven days a week. However, none of the group has ever seen these officers on the streets. The Brighton Society’s experience of those in charge of law enforcement is one of a slow to a non-respond approach and the failure to give meaningful sentences to those caught, which the statistics show to be very few. Jeremy Mustoe suggested that the residents’ associations and businesses might work collectively, informing the Council and the Police on what is happening on the ground and helping the Council to form a meaningful strategy that will have a real impact in tackling the graffiti problem in the city.

He also thought that we might consider going to the Police direct rather than to the Police Commissioner; and also to lobby both Council and Police. As he put it, “We must move forward at a political level as officers need to be pushed by councillors and public opinion.”

There is a small nucleus of concerned councillors: Phélim McCafferty (now Council Leader), Hannah Clare (Brunswick & Adelaide), Lee Wares (Patcham), Robert Nemeth (Wish), Lizzie Deane (St Peter’s and North Laine) and Amy Heley (Preston Park), who might be approached to join us in our endeavours to clean up the city. Nigel Massey pointed out that the Regency Square Society has a good working relationship with Cllrs Tom Druitt and Alex Phillips (Regency councillors) but they seem powerless to get officers to act. It was suggested for the next meeting to invite councillors on the ETS to our next Zoom meeting.

A Brighton Society representative said that, although the Graffiti Reduction Strategy highlights a need to work with partners, e.g. businesses, to eradicate graffiti, what and how it works, or might work is opaque. The Waitrose representative confirmed that a collective communication from Residents’ Associations to Waitrose head office regarding the constant tagging of Western Road branch would be listened and responded to ‘appropriately’. The Waitrose representative said as far as he knows currently Western Road businesses are not working together to combat graffiti.

scheme whereby perpetrators clean off graffiti. It should take place outside any paid work time and they should be given a number of walls to clean and a target time for completion. The Council might have to take out public liability insurance so the offenders can do the work unaccompanied.  This process needs further thought. 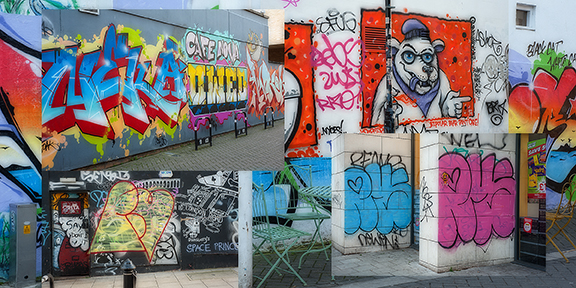 Meeting participants were urged to send images of graffiti in their own area to the Brighton Society before the next meeting and also any further thoughts they may have, the aim of this is to build an archive of information.

Summing up, Jeremy Mustoe thanked everyone for attending and acknowledged that it will be a long battle but said that we have to start somewhere.