You are at:Home»Objections»A wasted opportunity in the North Laine : proposed office block at 27 – 31 Church Street

We have lodged an objection to this office development proposal towards the upper part of Church Street in the North Laine.  It is within the North Laine Conservation Area with several listed buildings in the very close vicinity.

The site has been empty for about 25 years and has frankly been an eyesore for the whole of that period. The apparently permanent scene of bomb-site devastation caused by the failure of its owners to build on it has had a hugely detrimental effect on the character of the immediate neighbourhood.

So it should be good news that at last it is finally to be developed.  Except that it isn’t – not if this out-of scale, unfriendly and impolite building is approved.

It raises a number of important issues about how our city should – or in this case should not – be developed in the wider public interest, and not just for the profit of the private developer.  A major improvement in the quality of both design and public-spirited ambition is required from developers and designers if new buildings are to make a positive contribution to their local communities instead of – as in this case – having a negative effect on it.

The official reaction and response to this proposal will also show whether our planning officers and councillors have the ability to recognise poor design and unsympathetic buildings which impose themselves on our neighbourhoods and which seek to make private profit at the expense of the public interest and the local community.  And will they have the guts and nous to reject it?

The important questions this application highlight are:

This design proposal fails on all three counts.

Our objection below sets out our reasoning for this conclusion.

Firstly, this proposal fails to make any meaningful references to its surrounding buildings or to fit comfortably or sympathetically within its conservation area context.  It doesn’t even try to do so.  It is an uncompromisingly modern design out of scale and out of character with its surroundings.  Look at the relationship with the 2-storey residential terrace immediately to the south of the new building in the image above.  How sympathetic is that?

The image below shows the terraced cottages in more detail.  The new building will be behind the blue hoarding.  It will be about three times higher than the eaves line – compare this again with the image at the top of the page. And look at the image of the block model a couple of paragraphs below to see how the new building will dwarf its neighbours on three sides of the site. 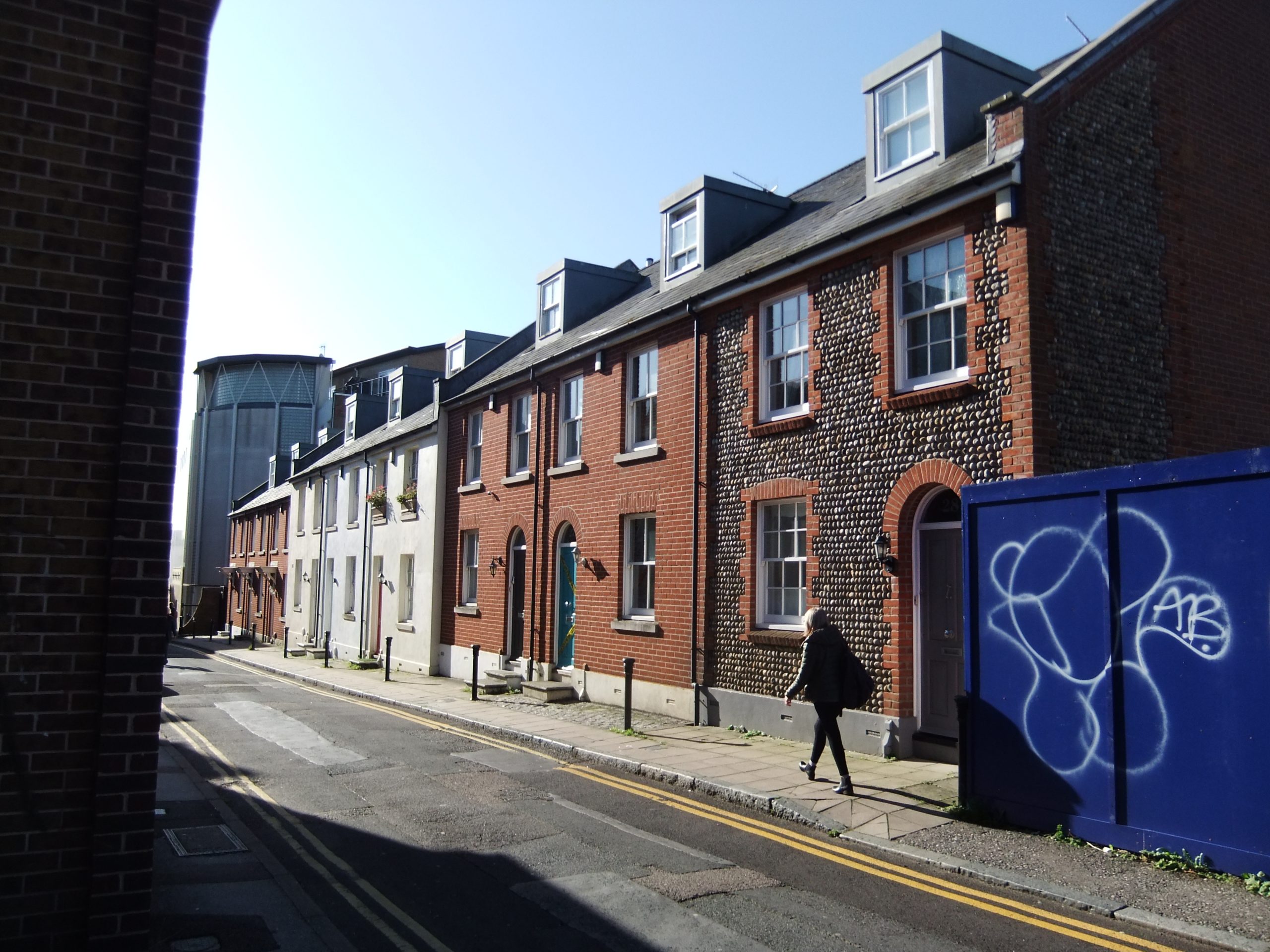 Secondly, in the context of the aftermath of Covid 19, how much demand for new office space is there likely to be?  Although there will still be some demand for offices, now working from home has been proved to to be a viable option, employers will be looking to reduce their overheads and office space they require by encouraging a significant proportion of their staff to work from home.  This will result in a lot of vacant office space within the city.  It makes absolutely no sense to build more office space.  What is really needed is low rise high density terrace housing – which would fit perfectly within the existing context of this site.

Thirdly this new building will completely block out daylight to the properties immediately behind to the west in Windsor Street.  This is completely unacceptable and any Council which approves such a brutal relationship with neighbouring buildings is not looking after the public interest.  Look at the images below. 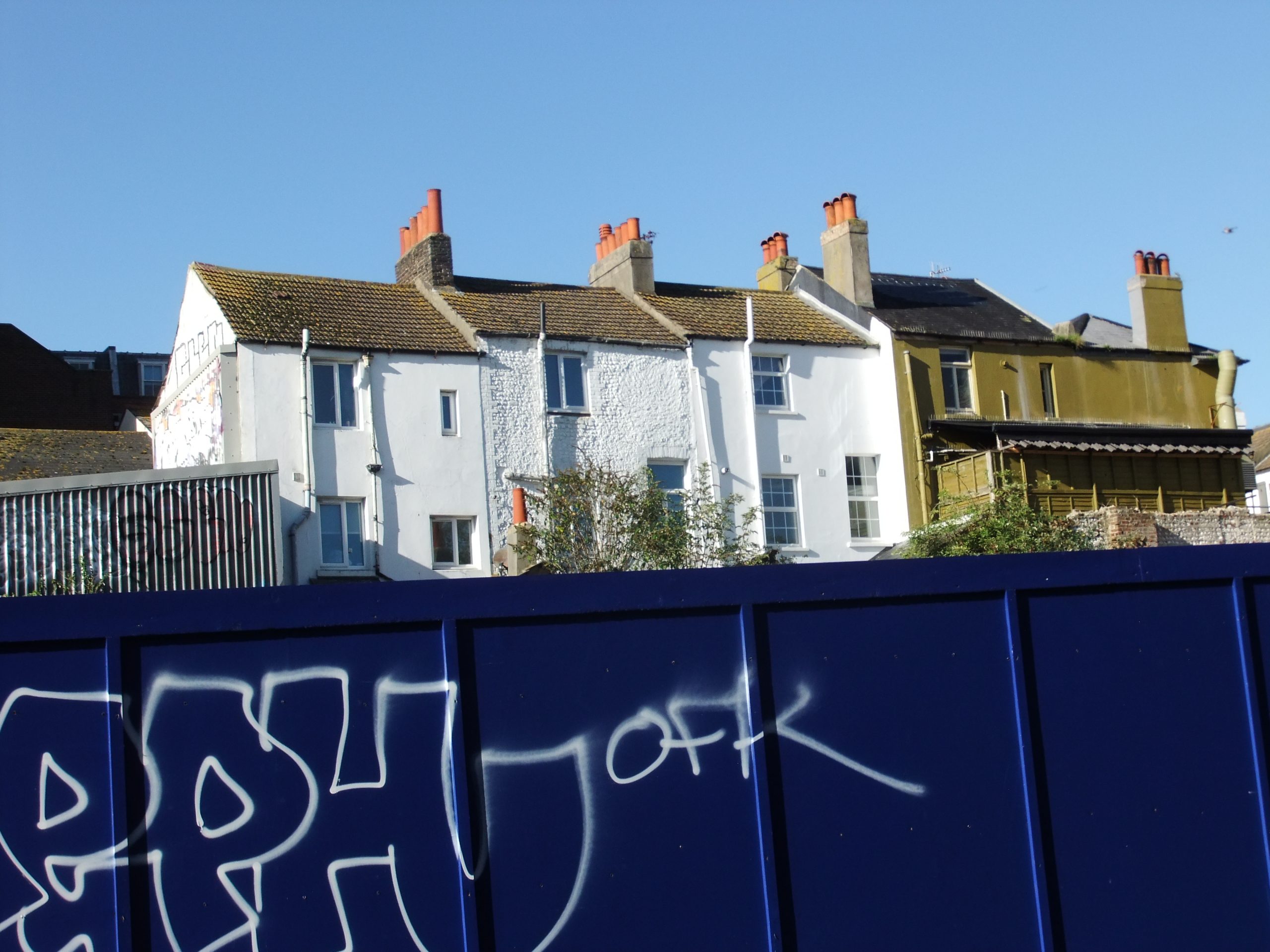 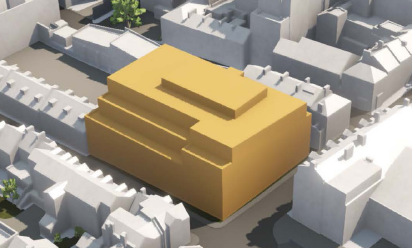 Read on for more detail…….

This planning application is a missed opportunity to carry out a sensitive piece of urban renewal which could – if done skilfully and sensitively – set an example of how to stitch a contemporary building into the existing street scene of Church Street in the North Laine Conservation Area.

This proposal fails utterly to do that.

The character of Church Street, despite a few regrettably out of scale and highly unsympathetic buildings further down the street, is still mostly defined by older buildings within the Conservation Area, and includes four listed buildings very close to the site – the Drill Hall opposite, and Nos. 20, 21 and 23 Church Street on the same side of the street just to the east.

There are three aspects of this proposal which concern us:

1. The first is the Heritage context.
2. The second is the proposed use.
3. The third is the ruthlessly inconsiderate reduction of daylight to adjacent properties.

1. The Heritage context
The importance of heritage assets needs to be recognised much more than we have in the past when considering applications for modern buildings in sensitive heritage situations.

On a greenfield site a modern building such as this as a stand-alone building would be acceptable.

It is not acceptable In this setting in the heart of the North Laine Conservation Area.

Neighbouring buildings of character like the Earth & Stars pub next door, the listed Drill Hall directly opposite the site, the terrace houses in Portland Street, and the listed buildings at 20, 21 and 23 Church Street just to the east, are very close to the site and will be detrimentally impacted by an uncompromisingly modern building on this site.

The application does not include essential information such as a street context elevation of the upper part of Church Street looking south. This is essential to show how out of scale this proposal is compared to its immediate neighbours.

Designing new buildings in conservation areas is all about creating polite relationships in terms of scale, massing, height, materials, and details. They should draw upon adjacent architectural references to create meaningful relationships between the new building and the existing urban fabric.

This design does not succeed in doing any of these. It doesn’t even try to do them. it is unsympathetic, out of scale, uses many materials which are quite alien to any of its neighbours and is uncompromisingly modern. One might say – with considerable justification – that it is uncompromisingly impolite, even rude in relation to its conservation area setting and its neighbouring buildings. We will come on to how rude when we discuss item 3 below.

It is regrettably yet another example of architects with no local roots – in this case they are based in Belfast – with no interest or feeling for the character of the existing historic urban fabric into which they are inserting their design proposals. We see it again and again in this city. Just look back at previous articles on our website for one bad design proposal after another. Hardly any are done by local practices with an interest in or ambition of integrating their designs into the existing urban landscape.

The east side of Church Street consists of small individual shops of two to three storeys including accommodation above. This scale continues throughout, to the south and north of the development site. Residential Portland Street is comprised of small scale residences, two to three storeys.

This proposed new building is completely out of scale and character with all these neighbouring buildings.

What’s more we question the accuracy of the CGIs accompanying the application.
Look carefully at the CGI below, in particular the eaves line of the Earth & Stars pub on the top right of the image. The parapet of the new building appears to be lower than the line of the eaves to the pub. Then compare it with the elevation to the right – the new parapet is clearly considerably higher than the eaves of the Earth & Stars. 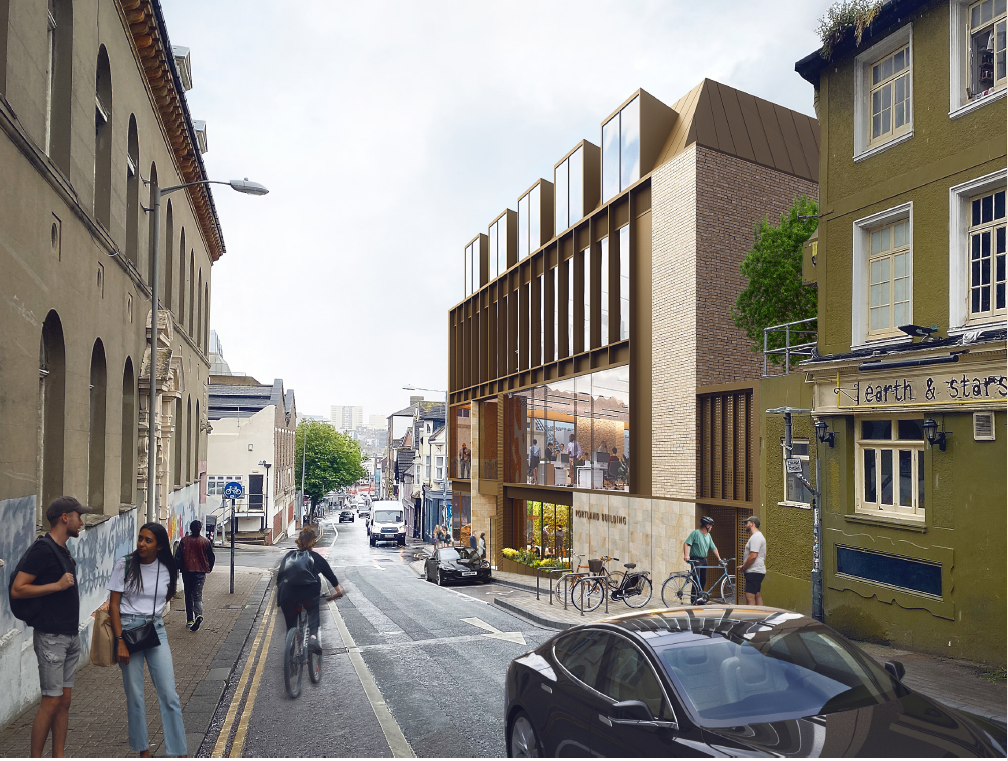 The CGI image is completely misleading and inaccurate.

The North Laine Conservation Area Character Study includes the following statement (written just after the previous buildings on the site were demolished in the early 1990s): “…. the demolished buildings “were an interesting and varied little group.”

And it goes on to suggest that “any new building should progressively step down the street as the older buildings do. … but also assist in securing a scheme which reflects more the scale, building forms and character of the North Laine and preserves and enhances the character and appearance of Church Street as a whole…. The opportunity might arise to encourage a scheme which was more in keeping with the size and scale of the building opposite… “

This proposal fails to meet that aspiration.

2. Proposed office use
Given the need for more housing in the city, the inability of the Council to meet its housing targets and the implications of this on the Council’s ability to control its own planning policies, added to the effects of Covid-19 in reducing the need for and viability of commercial property in the city, one has to question why it is considered that more office accommodation is preferable to housing on this site.

It makes no sense whatsoever. Housing would be a far better use for this site.

This is acknowledged in the Planning Report accompanying the application:

“Our technical analysis shows that….some surrounding properties will experience changes outside of the BRE recommendations. Where transgressions to guidance exist, they are isolated in nature and largely relative to the unique disposition of the site itself: i.e. the vacant plot and topographical gradient of the land together with the inherent architectural form of the pertinent receptors.”

So that’s OK then.

It is well known by designers working in the building industry that the BRE Daylight standards are a joke. They really are the very basic minimum. So when a proposal such as this argues that they can be reduced even further to the point where virtually all daylight is cut out from habitable rooms, the planning process has reached an unacceptably low nadir in terms of protecting people’s essential rights to basic levels of amenity.

Rather than trying to justify unacceptably low light levels, shouldn’t the new (much reduced) light levels be compared with those which applied prior to the 1990s demolition, and set that as an acceptable standard? That would be a much fairer way of judging what the acceptable daylight levels should be.

The lighting study accompanying the application makes no attempt to do that, but just assumes that although the daylight levels to the Windsor Street buildings are well below those recommended by the BRE, that is just a mere consequence of the urban situation the unfortunate residents of these buildings find themselves in.

Reduction of daylight below the very low BRE standards is just not acceptable at all.

This application makes the argument that the residents of the Milner Street flats also suffered reductions in their light levels as a result of the Circus Street development. If this similar situation in Church Street is allowed to happen, that will be yet another unacceptable precedent used to justify the unjustifiable by other developers in the future.

It is time to say NO. Reduction of daylight levels below BRE standards is not acceptable.

In summary – this proposal is not merely impolite – it is unacceptably rude and totally inconsiderate to its neighbours.

It cannot be argued that public interest outweighs the harm. The only relevant interest here is that of the developer.

The Brighton Society feels very strongly that this planning application is the wrong solution to the the constraints of this site for all three reasons discussed above.

It should be rejected outright.